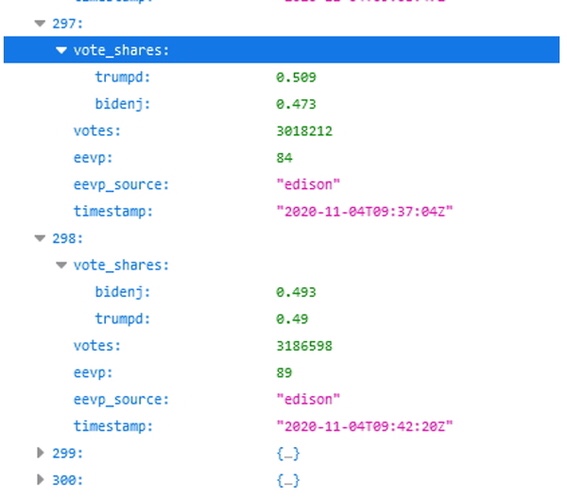 Conspiracy theory? Or is there statistical proof of voter fraud in the coding of the election software?

No matter what side of the politics divide one sits, independently qualifying the software should be a given. If Biden wins after any anomalous discoveries, so be it.

Truth be told, Democrats should relish the chance to absolutely guarantee beyond all reasonable doubt that Biden won the election fairly and squarely. They should push for transparency which shuts up the Republicans for good. Endorsing an investigation makes them look the clean shirt.

Claiming it was fair is one thing. Proving it, another. This is why the election is still far from over.

We find it dubious that Dominion systems stored data in Germany to be processed in Spain. How is it the world’s largest economy doesn’t have the capacity to store and process data at home?

Food for thought, at the very least. 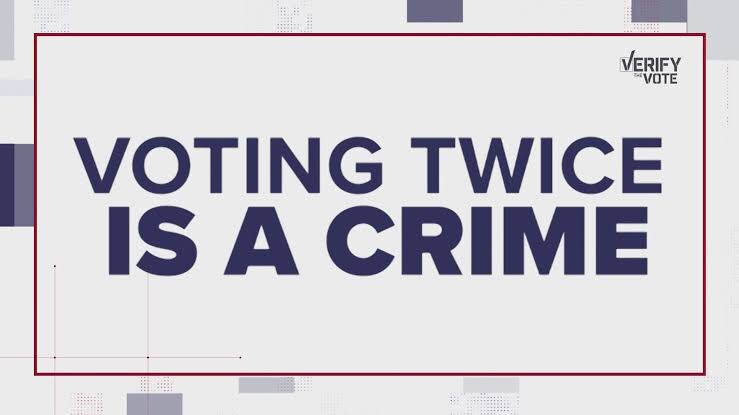 While the election looks to be a foregone conclusion for Biden, evidence has surfaced as to the ridiculously lax controls in places like Milwaukee, Wisconsin.

“The most striking feature of the data is a fact that cries out for clarification: in seven wards, voter turnout appears to have exceeded 100 percent.  In two of those wards, turnout exceeded 200 percent.  In another 15 wards, voter turnout exceeded 95 percent.  Joe Biden carried 21 of the 22 wards of the 95-plus-percent wards.  But then again, he carried all but one of the 67 additional wards in which the turnout was above 90 percent and won 80 percent of the vote citywide.

In 25 wards, Biden received 97 percent or more of the vote, none higher than 98 percent.  Based on exit polls, it is highly likely that these were overwhelmingly black districts.  No other demographic could produce those numbers.”

One suspects that Democratic operatives could not afford a repeat of Philadelphia 2012, when Barack Obama received 100 percent of the votes in 59 voting districts.

Barack Obama outscored Romney by a combined 19,605 to 0 votes cast in these 59 districts.  Fidel Castro never did this well.  That said, not a single major media outlet followed up on the Philadelphia story.“

Then one wonders why US elections end up in court… 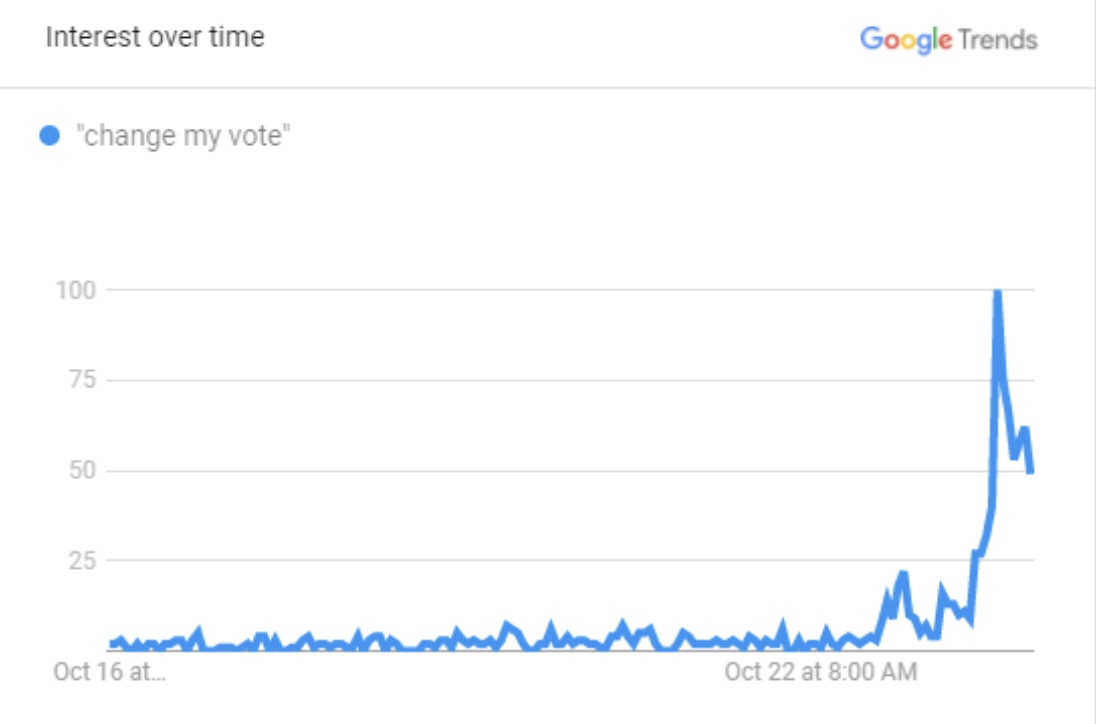 The “change my vote” phrase hit peak searches right after the second debate on Thursday –hitting the MAX limit of Google trends.

After Biden was caught lying on fracking & vowed to shut down the oil industry, the searches were particularly strong in Pennsylvania, Florida, North Carolina, Michigan, Georgia, Texas and Wisconsin. 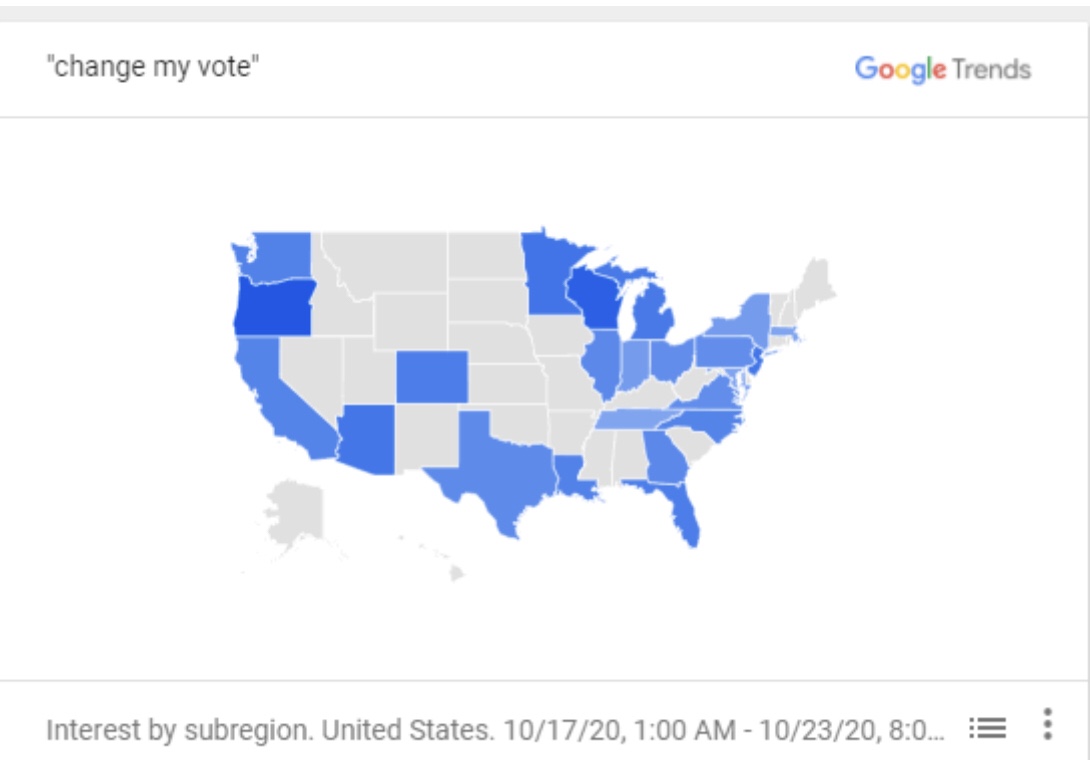 Among the states that do allow voters to change their early ballot after it’s been cast are: Wisconsin; Minnesota; Michigan; Pennsylvania; New York; Connecticut; and Mississippi.

Wisconsin voters who voted early in person can recast their ballot as long as they do so by Saturday, October 31st. The deadline for absentee varies by city. Contact your city clerk for more information.

Minnesota also allows absentee voters to change their minds. The deadline is a week before the election.

In Michigan, absentee voters can change their ballots if they have not yet been processed and tabulated, according to an official at the state’s Bureau of Elections.

If you want to change your absentee vote, contact the office of your city’s clerk’s office. The best chance to change your vote is as soon as possible before 4 p.m. Monday, the day before the election.

Joe Biden visits Kenosha, WI. A young black lady refuses to read off the Dem script she was presented with and tells him what he needs to hear.

Why bother having a town hall if the very people the Dems are supposedly there to listen to are required to stick to the pre-ordained narrative? 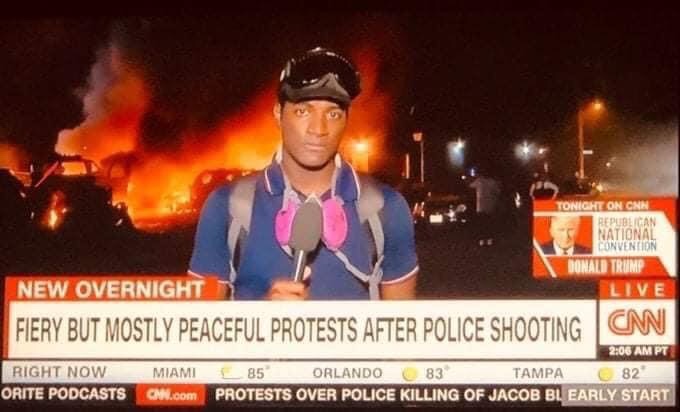 CNN has never been the final word in balance.

"F*** you, you ain't with us" woman yells at armed man who is attempting to stop the mob from looting and vandalizing #Kenosha businesses pic.twitter.com/FkDlqz9w4N

Who knew that eventually armed civilian militia would front up to protect local businesses in places like Kenosha, Wisconsin?

Of course BLM is upset. They point out the hypocrisy of the protestors. If they want to win hearts and minds for their cause, harming the livelihoods of innocent residents and business owners isn’t smart. 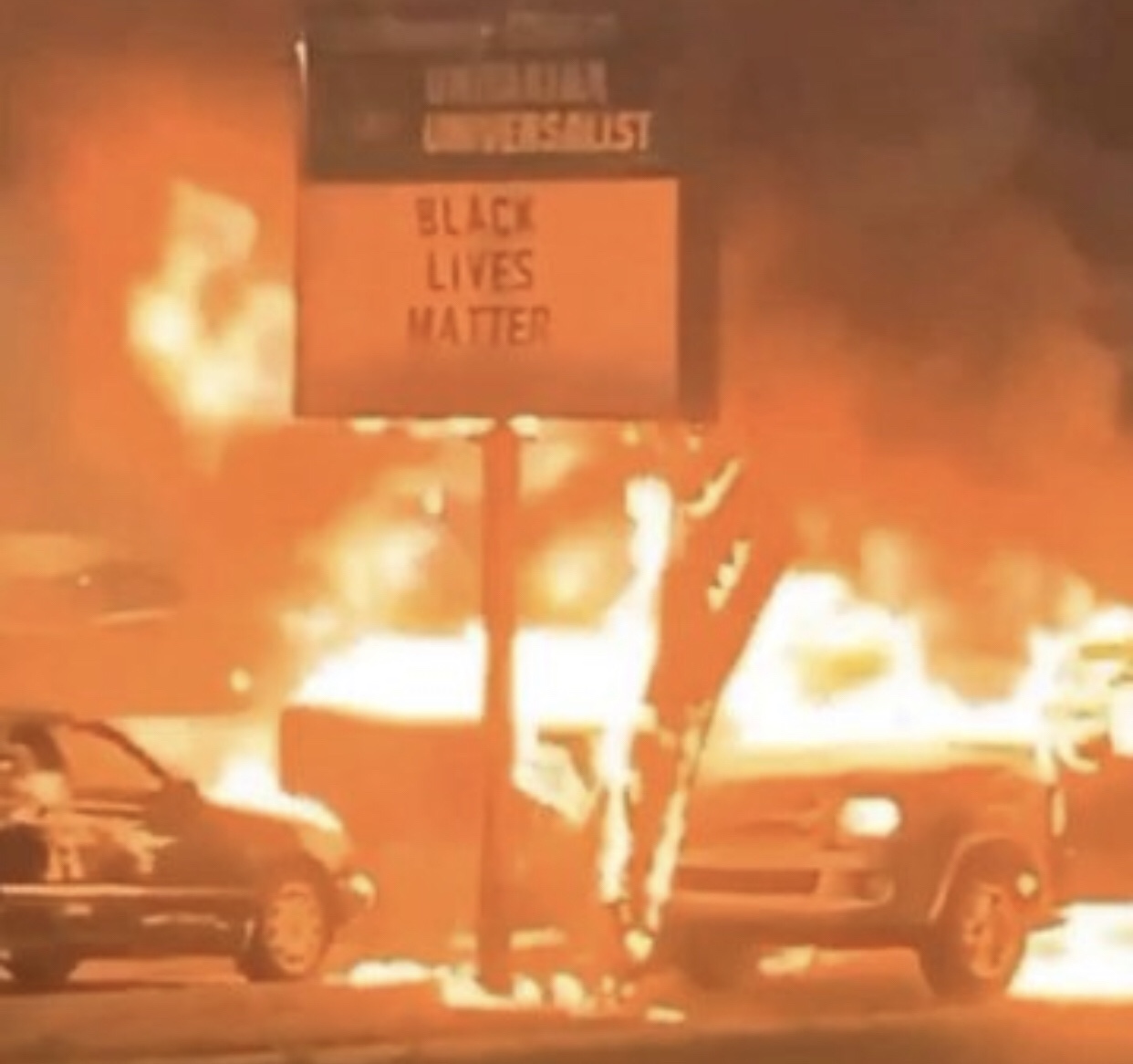 We don’t intend to make any informed comments about the police shooting of a Jacob Blake in Kenosha, Wisconsin. We don’t have enough context. Best not join the chorus of mainstream media which will seize on any edited video clip to feed a narrative and run with the headline for days instead of ignoring it like they did with the murder of 5yo Cannon Hinnant.

Let’s not even begin to discuss Democrat Wisconsin Governor Tony Evers, who despite the lack of evidence, immediately sided with the mob. As is most often the case, evidence will show that the whole situation could have been avoided were instructions followed. That isn’t to condone excessive force but to recognize edited clips can misrepresent realities.

So what of those businesses and houses of prayer that proudly displayed ‘Black Lives Matter’ outside? Well it only goes to prove that the mob doesn’t care. One would think insurance companies were encouraging BLM signs in shop front windows as a way to help policy holders lower premiums. The appeasers were eaten first in Kenosha. A car dealership was torched. Why do innocent business owners end up victims? 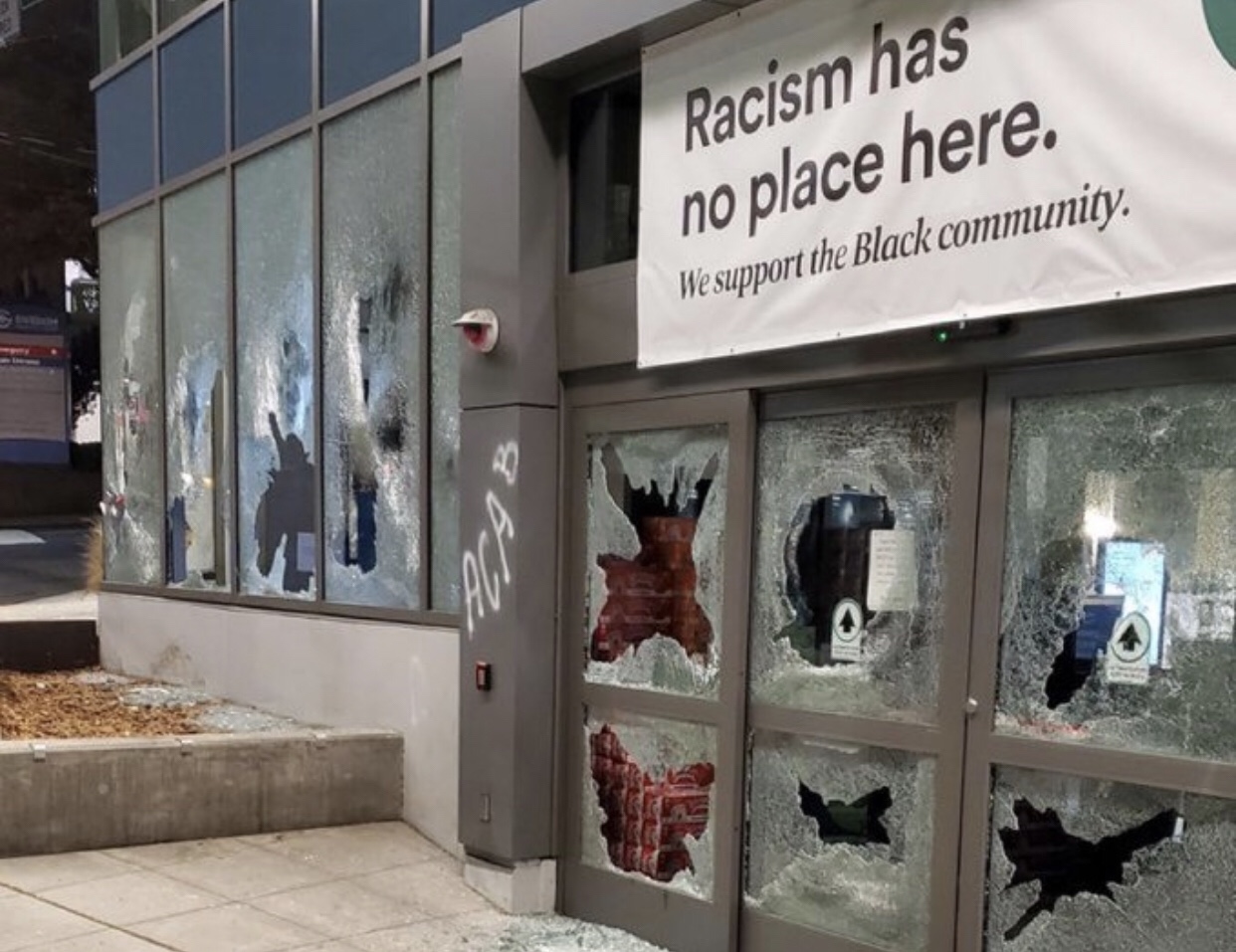 At what point, if they haven’t already, will Americans stop tolerating any more protestors shining flashlights through their windows in the middle of the night? What will they tell their terrorized children who are woken up by obscenities yelled in their suburban Portland neighborhoods demanding they abandon their properties?

Where was the condemnation during the Democratic National Convention? Why no mention of the riots? Oh, that’s right. They’re all peaceful protestors.

We think that the strategy of chaos hurting Trump’s re-election chances will spectacularly backfire. All of the platitudes that parsed the lips of the hypocritical and divisive Obamas or woke celebrities at the DNC only reinforced they are the party for the elites.

The media may be complicit in cheerleading but ‘lived experience‘ is one factor that no amount of political bluster or fancy journalism can overcome. It was the same in 2016.

Citizens are rightly furious. Despotic mayors and governors have subjected them to unnecessary economic pain and stripped them of their dignity through coronavirus lockdowns but stay silent through the mayhem of BLM and Antifa. The biased media only amplifies their rage.

Normally, a dud economy would be an election killer for an incumbent. This time, the sinister politics of the opposition will force many fence sitters to bite their lip and tolerate 4 more years of Trump’s vulgarity. We think a landslide awaits, albeit with an ugly 75 days leading into it.

In the words of Nancy Pelosi, “people will do what they will do.”

It seems a government agency, the Dept of Natural Resources (DNR) in Wisconsin, is mandating people wear masks during Zoom meetings to show they are beyond full compliance with Democrat Gov Tony Evers’ mask order.

“Also, wear your mask, even if you are home, to participate in a virtual meeting that involves being seen — such as on Zoom or another video-conferencing platform — by non-DNR staff. Set the safety example which shows you as a DNR public service employee care about the safety and health of others.”

Despite no recommendation by the CDC or requirement by Evers to wear masks while at home, the DNR seems more interested in virtue signaling to the governor than the virus itself. 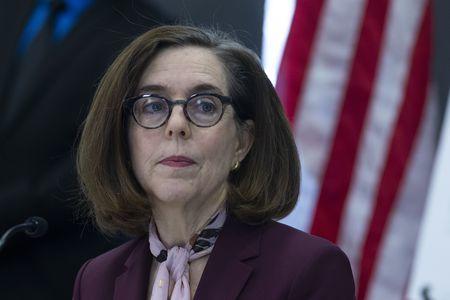 An Oregon judge has declared that the coronavirus restrictions enacted by Gov. Kate Brown (D) are “null and void” because her emergency orders were not approved by the state legislature after 28 days. The judge agreed with the lawsuit launched by 10 churches against the State of Oregon which argued that the emergency powers only lasted for a month and that to lengthen them required legislative approval which she did not seek!

Naturally, Oregon Gov. Brown is seeking to overturn this ruling in the Oregon Supreme Court. How the tables turn when dictatorial governors seem happy to ignore the very rule of law that they wish to enforce on everyone else because they believe that they know better than everyone else.

As the churches that filed the lawsuit would say, “practice what you preach.”

We wonder how quickly Brown will look to ram these orders through the state legislature so she can comply with the law and beat her peons into submission with the threat of child protective services as an added disincentive to ensure rogue constituents bend to her will even though 99.997% of the state’s residents haven’t succumbed to coronavirus.