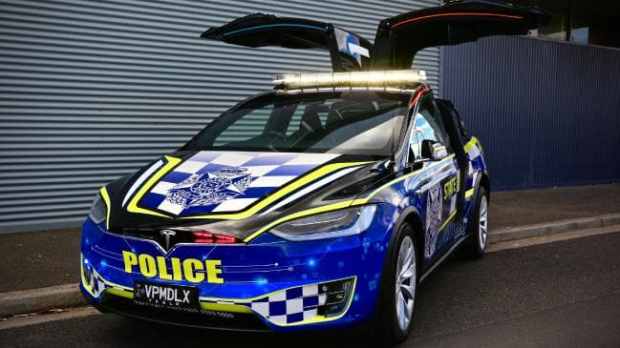 Victoria Police is renowned for its commitment to inclusion and diversity. Who could forget the push for segregated sessions in the recruitment drive? Stands to reason the coppers have introduced the Tesla Model X to the fleet to show “green” credentials. The point of a police car is instant dispatch when required to attend to a crisis situation, from thwarting a terrorist in the Melbourne CBD or rushing to a domestic dispute. It won’t look good when the police have to wait for the fast charger at the base to provide enough juice to make it the scene of the crime. Now that Hazelwood coal-fired power plant has been closed, good luck waiting on renewable energy to charge these cars for practical police use. Don’t be surprised when the shortcomings force a rethink.

What will they tell Victorians? “Sorry, in our quest to save the planet you’ll have to wait another 3 hours before we can attend to your domestic violence dispute. Bear with us. The car is on the charger!”

In 2016, the LAPD bought $10m worth of BMW i3s to show its commitment to climate abatement. Sadly, the cars went largely unused as they were unsuited for police work.

LAPD Deputy Chief Jorge Villegas said of the purchase, “Money well worth it…It’s all a part of saving the Earth, going green … quite frankly, to try and save money for the community and the taxpayers.”

But sources say some personnel are reluctant to use the electric cars because they can only go 80-100 miles on a charge. And the mileage logs we obtained seem to back that up.

From April 2016 when the project started through August 2017, we found most of the electric cars have only been used for a few thousand miles…And a handful are sitting in the garage with only a few hundred on them.

That’s an average use of 6 miles a week!

With the monthly lease payment of a little more than $418, this one costs taxpayers over $15 a mile to use!… It just doesn’t make any sense!”

CM one posted this question to someone from the NSW St Johns Ambulance with respect to discussions about EV ambulances. He said unequivocally,

“We have Webasto heaters in our cars in the colder areas. Running off the diesel they can operate 24/7 if needed. If we don’t have them some of our equipment doesn’t work like our tympanic thermometers, the blood glucose reader and then there is the problem of having cold fluids in the car. This is a problem if we are giving these IV because we can make a patient hypothermic if it’s cold. Then there’s just the general environment inside the cab. It needs to be warm in winter.”

That is the point. Emergency services need to be able to operate on call. 5 minutes to fill up with gasoline or diesel means that efficient utilisation and dispatch is guaranteed for at least 500km+.

If end users have to weigh having their lives saved or rescue the planet, it is a no brainer which they will choose. We already know that Tesla P100Ds have done 167,000km in CO2 before they’ve left the factory. “To Protect after Charging” should be emblazoned on the doors.