Thanks to the SOTU, this chart from the St Louis Fed (FRED) gives us a great read across on how the Bottom 50%’s fortunes have fared over time.

Democrats should be outraged that the ultra-wealthy have done much better under Obama with a 100% gain in net worth under his term vs the paltry 15.3% so far under Trump. Is this the real reason why Nancy Pelosi is so upset?

If you want to see how much members of Congress are worth please check out Roll Call. While some politicians come from inherited wealth, many on the public purse have managed to do pretty well on a paltry government salary.

Thanks to Australia’s ridiculous energy prices, Aussie company Bluescope confirmed the expansion of capacity in Ohio. In Feb 2019, the company CEO said, “much cheaper energy in the United States is a major driver of the company’s preparedness to invest in a $1 billion expansion in Ohio.”

Meanwhile, our lawmakers continue to behave as if they’re in control of power generation, pandering to pathetic ideologies instead of realities.

In 2017, Tomago Aluminium reported, “We have to grow to be competitive and to be ahead of the curve, but when the spot price went to $14,000 [per megawatt hour] we had to take that load off. It’s just not sustainable. You can’t smelt at that price. We have had to curtail or modulate the load [on occasions] or we get hammered by the price…We cannot continue to keep paying those prices. We have to find a solution. The prices are crippling”

Well done Australia. Home to the cheapest and best quality energy-producing assets around but saddled with the world’s highest prices. Beholden to being guilt-tripped into reducing CO2 levels that even if we cut to zero would have absolutely no impact on limiting global temperatures.

We only need look to Germany to see how well their renewables plan is working for them. What have the Germans done recently? Favour more electricity production from lignite (brown coal) and biomass which are the two highest emitting power generation bases. Furthermore,

“After the German government decided to reduce subsidies to the solar industry in 2012, the industry nose-dived. By this year, virtually every major German solar producer had gone under as new capacity declined by 90 per cent and new investment by 92 per cent. Some 80,000 workers — 70 per cent of the solar workforce — lost their jobs. Solar power’s market share is shrinking and solar panels, having outlived their usefulness, are being retired without being replaced.

Wind power faces a similar fate. Germany has some 29,000 wind turbines, almost all of which have been benefitting from a 20-year subsidy program that began in 2000. Starting in 2020, when subsidies run out for some 5,700 wind turbines, thousands of them each year will lose government support, making the continued operation of most of them uneconomic based on current market prices. To make matters worse, with many of the turbines failing and becoming uneconomic to maintain, they represent an environmental liability and pose the possibility of abandonment. No funds have been set aside to dispose of the blades, which are unrecyclable, or to remove the turbines’ 3,000-tonne reinforced concrete bases, which reach depths of 20 metres, making them a hazard to the aquifers they pierce.”

Canberra, please note that if you pursue common sense, voters will celebrate a reduction in power prices that current experience proves are NOT going to come through ludicrous renewable energy targets. 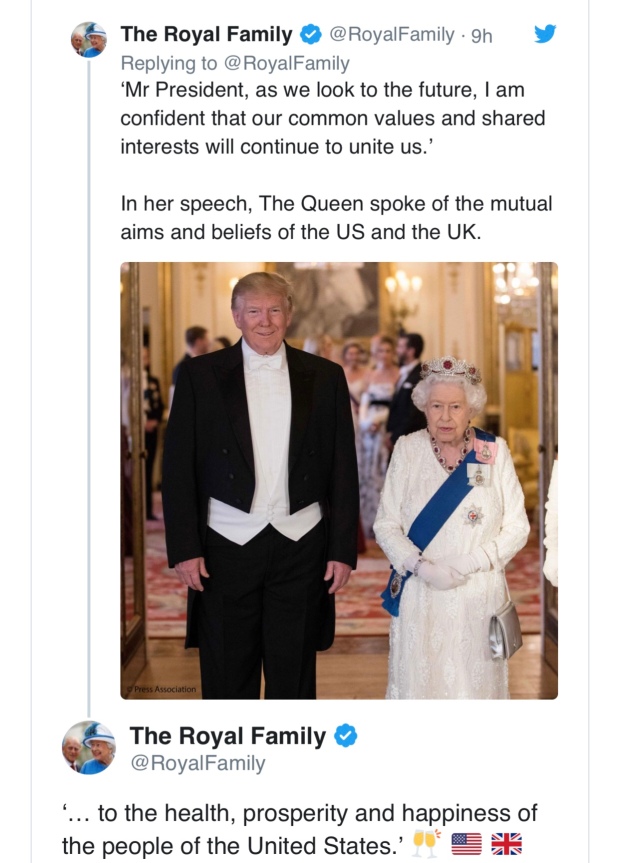 Wow! There was Sadiq Khan blathering on video about feminism and how Trump doesn’t share the values of Londoners or Brits to then have the Queen authorize this tweet, taken from her speech!

“Mr President, as we look to the future, I am confident that our common values and shared interests will continue to unite us.”

As CM has been saying all along, the Queen knows what 80 years of friendship means and maintaining a relationship with those that protected her monarchy does not stop because activists lose their minds.

By the way The Royal Family has 3.9 million followers on Twitter suggesting 4x more people follow the Queen than Khan.

It is hardly statesmanlike to tweet off insults but there is a horrible truth to what Trump wrote about Khan and de Blasio. London crime has got out of control. CM wrote about it last year. However should we be the least bit surprised Trump slammed him on Twitter? De Blasio was trashed by his own NYPD for his incompetence. So harsh words that carry a lot of truth.

Not to make a two wrongs argument, but Sadiq Khan made some pretty disparaging remarks about POTUS ahead of his visit so he was inviting a bloody nose from a man with a glass jaw. Khan’s comments led Her Majesty to leave him off the official invite list for the Trump state dinner. Clearly she knows the long history of the UK-US relationship is more important than pandering to the whims of a weak,virtue signaling identity politics loving appeaser. Queen Elizabeth has never forgotten the special friendship she grew up with 80 years ago.

Or maybe we should question the utterly childish antics of the Shadow Foreign Minister Emily Thornberry who called for a mass protest against Trump on June 4? It would be understandable if Idi Amin had visited but this is the UK’s strongest ally which has a democratically elected head of state. Yet Thornberry railed at Trump as if the UK was in a state of war with America. Only proves how unfit Labour is to govern.

When will the left realize they only do his bidding when they let Trump Derangement Syndrome consume them?

Joe Biden maybe the front runner for the Democrats in 2020 but the internet trolls are having a wow of a time. Note his creepy t-shirts are being sold under www.joebiden.info and the web address of joebiden.org leads straight to the White House website listing President Trump’s accomplishments. It seems now that election campaigning requires more than just placards and postbox drops. Ouch.

As of March 28th 2019, the St Louis Federal Reserve updated the status of pre-tax US corporate profitability (ex inventory adjustments). It clearly shows that since 2012 they have tracked sideways. Despite the lowest sustained interest rate environment since WWII, US profitability has drizzled over the last 7 years. Is it any wonder Trump was calling for more QE?

Peak TDS. US high school students are being indoctrinated with leftist bile in the latest update of the text book, ‘By the People: A History of the United States‘. The book denotes that Trump is mentally ill and his followers are racist. While teachers and educators are free to speak their mind in private about their complete dislike for Trump, it is another thing for their derangement syndrome to be presented as unchallenged fact in a textbook and taught.

Under the chapter titled, “The Angry Election of 2016,” it reads, “Most thought that Trump was too extreme a candidate to win the nomination, but his extremism, his anti-establishment rhetoric, and, some said, his not very hidden racism connected with a significant number of primary voters.”

The book also covers the topic of the mostly older, mainly rural or suburban and overwhelmingly white supporters, by describing,

“Clinton’s supporters feared that the election had been determined by people who were afraid of a rapidly developing ethnic diversity of the country, discomfort with their candidate’s gender and nostalgia for an earlier time in the nation’s history…They also worried about the mental stability of the president-elect and the anger that he and his supporters brought to the nation.”

A statement from the publisher, Pearson, read,

“This work is designed to convey college-level information to high school students and meet specific Advanced Placement standards. It aims to promote debate and critical thinking by presenting multiple sides of historical issues and offering a broad survey of arguments from the 2016 presidential election and other recent topics. We have reviewed the passages in question independently and in the context of the rest of the book. This review has confirmed that the text offers a broad view of critical arguments from both sides of the 2016 presidential election.”

One has to question independence on the review. Surely TDS was a prerequisite.

In the immortal words of George Costanza from Seinfeld, “it is not a lie if you believe it”

Yet more ammunition for Trump to romp home in 2020.