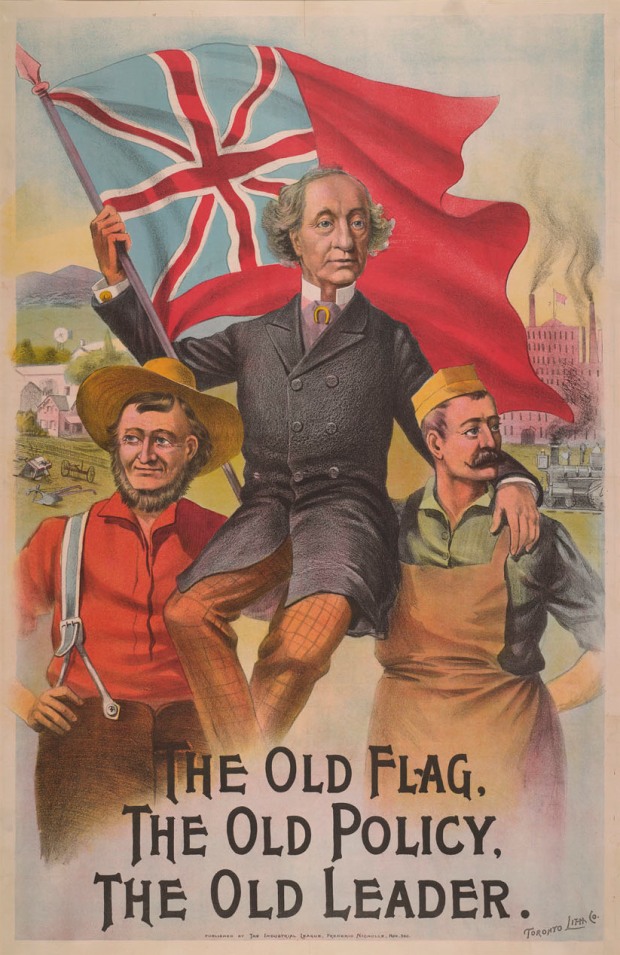 The City of Victoria has removed a statue of Canada’s first Prime Minister John A. Macdonald from the steps of City Hall. As ever the left’s obsession with erasing history it doesn’t like continues around the globe. The main question is, who does this help? Macdonald did call Canada’s indigenous people “savages” but are these words remotely surprising for the times?  It isn’t to condone those sentiments but why not learn from them instead of bleaching things said 150 odd years ago? Embrace how we have changed and “progressed.” At the very least use the first PM as a yardstick for how far civilization has come.

Will the left go a step further and try to deny Macdonald was the 1st PM? Rewrite Canada’s confederation history  from 1867 to 1873 and make the country’s 2nd PM Alexander Mackenzie the first, because he turned down the offer of a knighthood. Sadly the left would have to discard the multiple times Macdonald served thereafter as PM?

Macdonald offered to resign in 1873 when the party was caught up in a bribery scandal over a rail contract. His party lost the general election but he still led in opposition until winning government again in 1878. Macdonald served for 19 years in the top job despite all of these issues. He can’t have been that bad or did Vladimir Putin’s predecessors interfere?

The biggest irony is that Macdonald is largely regarded as one of Canada’s best PMs, ranked 3rd by MacLean’s in 2016 out of 23. He was 2nd in 1997 and 2011. Those rankings take into account a variety of measures ranging from effectiveness, economic growth and legacy.

Which brings us back to what does removing statues achieve? How do we move forward as a society if some who weren’t alive at the time feel obliged to apologize to people that weren’t born nor directly affected by whatever words were used?

As an Australian, should CM flagellate for things that our First Fleet might have perpetrated 230 years ago? CM’s father emigrated to Australia in 1949, not 1788. CM’s great grandparents were of Norwegian, Polish and Austro-Hungarian stock. Perhaps CM should embark on a global apology tour for things that happened at the hands of those evil empires over the centuries?

Or do we just conclude that the radical left might be best to look in the mirror and reflect why conservatives don’t wish for history to be erased as the 100 million that have died at the hands of socialism’s own work serve as a stark reminder why we need to remind us of our past? Exactly. Wipe away all signs of supposed oppression and bring on the cultural Marxists to enlighten us on how we need to conform through compelled speech and laws to punish us if we choose to step out of line to their warped version of the world. So much easier to do with social media and facial recognition. 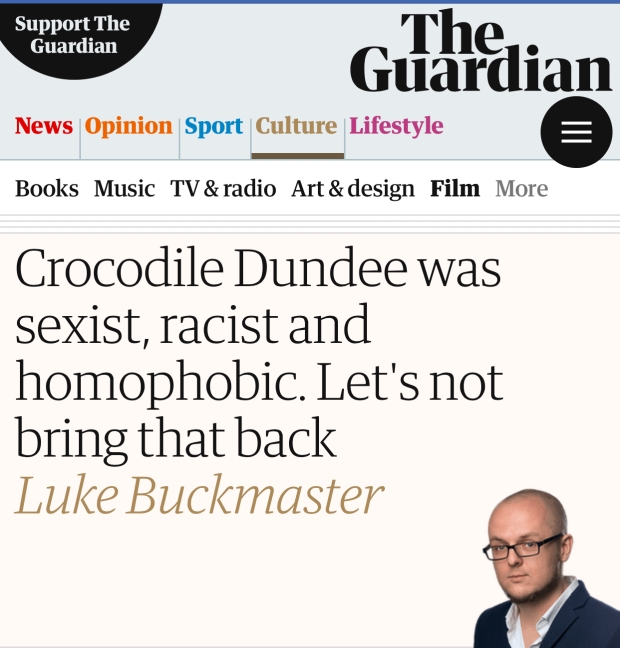 It is no surprise that The Guardian has published a review like this. It is yet another reason why it still begs for donations at the end of every article. Instead of thinking the content might be the problem the paper still thinks it’s readers “just haven’t come around yet”.  It’s consistent with leftist thinking.

“Designed to appeal to US audiences first and foremost, and subsequently exploiting Australia’s inferiority complex, Crocodile Dundee confirmed false preconceptions Americans had (and perhaps still have) about Australia and Australians. These movies constructed a conservative fantasy, where white hetero males do all the hard work and are justly rewarded, and where everybody else, including “the sheilas”, “the Aborigines” and “the gays”, understand their place in the pecking order – which is somewhere below people like Dundee.”

Doesn’t the $700mn that the Crocodile Dundee franchise earned speak volumes of is popularity? Was it a surprise to see Tourism Australia make Paul Hogan (Crocodile Dundee) it’s pin up boy to tell Yanks he’ll “put another shrimp on the barbie”? The Guardian should take note.  Is it that many people see beyond all of these stereotypes because of the comedy within it? Why would people pay to watch a comedy film if it must walk on egg shells over every potential grievance? Maybe it would please Buckmaster if signs lit up telling audiences when they should applaud and boo? That way we could be indoctrinated inside the theatre. Perhaps filmmakers should pool all revenues at the box office and divide them evenly so those that didn’t do very well get equal pay?

Will The Guardian protest in ways that force the film content approval boards to edit out any “insensitive comments” against minorities? Jerry Seinfeld used to make fun of our differences all the time. One episode saw Jerry asking a mailman who happened to be of Chinese origin whether he knew where a Chinese restaurant was. “Do you think because I’m Chinese that I know where the Chinese restaurant is?” “No I thought you’d know because you’re a mailman” Two perspectives hidden in the comedy. If Jerry Seinfeld wasn’t funny he wouldn’t have been paid millions per episode. The viewers spoke and the network listened.

The problem with the left is that they can’t laugh at themselves let alone life. Most good humour is achieved by making fun of people. Ricky Gervais made a whole comedy series ‘The Office’ which poked fun of the horrible boss most of us had encountered while tackling all the issues around race, gender, sexual orientation, office romances, hierarchies and the politics inside the workplace. It was so funny because the viewer could laugh at the truth behind the storyline as they could rattle off names of their own colleagues who were just like the characters.

But no, humour must be surgically removed by the state. Rules must be put in place to protect people that aren’t necessarily asking for it.  Were Aborigines outraged after the first Crocodile Dundee? No. Should they and other minorities that supposedly had their feelings hurt retroactively seek compensation from Paul Hogan? Should he be dragged in front of the Australian Human Rights Commission?

What Buckmaster overlooks is the hypocrisy of Hollywood. As the #METOO scandal broke, celebrities might have worn black but so short of material were most of the dress makers one would be hard pressed to see it as a legitimate protest against sexual harassment. That’s ok though as their acceptance speeches spoke of gender pay gaps and all the other champagne socialist causes. That’s the difference. Because they support the leftist causes that’s alright even though half of those in the room are perfect examples of ignoring causes until it affects them. Surprise surprise to see the ratings of Hollywood award ceremonies  plummet. Ringing any bells Mr Buckmaster?

So to  Buckmaster’s  hope that the next Croc Dundee film removes the very things that made the franchise such a hit. Why not just let the box office tell the story of what people are prepared to pay for? People can make up their own minds on what they’re offended by. They don’t need the state to control language and thought. Look at all the howls of protest from the left about Tommy Robinson being a hateful racist bigot. Then look to why he has two #1 best selling books on Amazon? Could it be more people actually agree with him but keep quiet to avoid endless tirades from the left? Then they wonder why Trump won. In a sense the president is a Crocodile Dundee. He portrays himself as a silverback who grabs crotches and throws caution to the wind at political correctness.