These people have absolutely no shame.

That’s what former staffer and Democrat activist Dana Houle decided to do. This brave keyboard warrior tweeted (and deleted) the disgraceful smear in the picture above.

Never mind that in the 2017 in front of the Senate Judiciary Committee, Barrett said of one of those adopted kids, “Vivian is our miracle.” She was so ill when they adopted her at 14 months of age that doctors doubted she would ever walk or speak. “Today Vivian is a track star, and I assure you she has no trouble talking.”

Maybe Houle was inspired by the Newsweek article that sought to disparage her religious beliefs. The magazine ended up retracting its baseless attack.

Don’t these lunatics realize they are actually helping the monster they created to do another four years?

As we continue to say, the Democrats are making the best possible argument as to exactly why they are far from a credible alternative.

Leave the kids out of it.

We don’t need to remind readers of the slump in popularity for out-of-touch celebrities. The Emmys last week had 33% of the audience of 2013. Relevance?

Musician John Legend is the latest celeb threatening to leave America if Trump wins re-election. A shame he just bought a $17.5m mansion in Beverly Hills.

In 2016 we had so many artists who made the same promise. Yet they all stayed. Who knew that America is best for their careers?

Several years ago we did a study and proved that Trump is fantastic for Hollywood stars’ social media profiles. They should hope he wins re-election so they can keep relevant in a crowded market place for woke causes. Why?

“Take James Corden- of car-pool karaoke fame. He averages around 1,600 likes on Twitter per apolitical tweet, which is pretty dismal considering he has 8.9mn followers. When he mentions anything to do with President Trump or his policies (especially lately), his numbers experience more than a 10-fold jump!”

Trump is great for business. Grounds for congratulations not censure.

If the FBI’s actions surrounding the investigation of Trump before the 2016 election was as squeaky clean and by the book as made out, why did a swathe of agents take out ‘liability insurance‘ two weeks before Trump took office?

The Federalist notes from federal court filings that with respect to ‘Operation Crossfire Hurricane‘:

“Federal Bureau of Investigation (FBI) agents tasked by fired former Director James Comey to take down Donald Trump during and after the 2016 election were so concerned about the agency’s potentially illegal behavior that they purchased liability insurance to protect themselves less than two weeks before Trump was inaugurated president, previously hidden FBI text messages show. The explosive new communications and internal FBI notes were disclosed in federal court filings today from Sidney Powell, the attorney who heads Michael Flynn’s legal defense team.”

“[W]e all went and purchased professional liability insurance,” one agent texted on Jan. 10, 2017, the same day CNN leaked details that then-President-elect Trump had been briefed by Comey about the bogus Christopher Steele dossier.”

“Holy crap,” an agent responded. “All the analysts too?”

“Yep,” the first agent said. “All the folks at the Agency as well.”

“[C]an I ask who are the most likely litigators?” an agent responded. “[A]s far as potentially suing y’all[?]”

“[H]aha, who knows….I think [t]he concern when we got it was that there was a big leak at DOJ and the NYT among others was going to do a piece,” the first agent said.

“I’m tellying [sic] man, if this thing ever gets FOIA’d, there are going to be some tough questions asked,” one agent wrote. “[A]nd a great deal of those will be related to Brian having a scope way outside the boundaries of logic[.]”

“We have some loose ends to tie up, and we all need to meet to discuss what to do with each case (he said shut down Razor),” one agent texted, referring to Crossfire Razor, the FBI’s internal code name for the investigation of Flynn.

“[D]oing all this election research – I think some of these guys want a [C]linton presidency,” one agent wrote on Aug. 11, shortly after the FBI opened the Crossfire Hurricane investigation against Trump.

It was only a few weeks ago when we had news that many staffers working for Mueller mysteriously forgot their iPhone passwords and wiped all the data.

Back in 1991, Judge Clarence Thomas was nominated by George Bush Sr to fill a vacancy on the SCOTUS bench.

The Democrat-controlled Senate took to a smear campaign dug up by staffers alleging Thomas had engaged in inappropriate sexual behavior with Anita Hill, someone he worked with a decade prior.

Suffice to say Anita Hill was subject to a detailed grilling over her sordid allegations and such was the humiliation, the other two key witnesses declined to subject themselves to the same treatment.

Politics is a dirty business. One wonders what dirt will be dished up for the coming nominee?!!

The Prince and Princess of Woke continue to become ever more cringeworthy.

It is surreal to hear lectures from people like this imploring we build “communities of compassion.” Harry infamously wore a Nazi uniform to a fancy dress party and Meghan thinks a nuclear family destroying self-professed Marxist co-founder of BLM is someone to aspire to and worthy of a Netflix docuseries.

Harry blathered about clamping down on hate speech and misinformation. Don’t they read the mainstream media or see the party they are endorsing took 100 days to condemn rioting, looting and destruction of public property in their own back yard?

No wonder the Queen had the Palace slap her grandson. 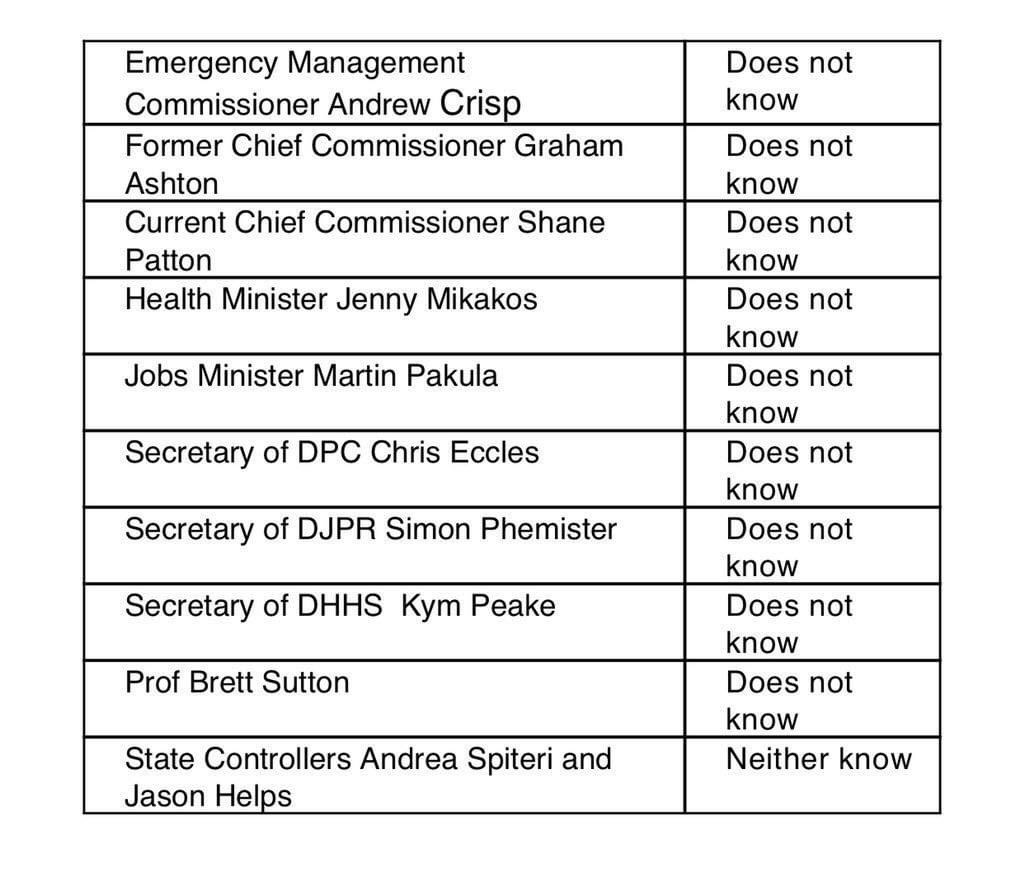 What a farce. These are the responses given by senior officials in the Victoria government when questioned over who was responsible for ordering private security guards which led to the hotel quarantine outbreak fiasco.

These are the very people who expect Victorians to put trust in their ability to execute.

No doubt when Premier Dan Andrews testifies at this enquiry, he’ll have forgotten too.

Any other state premier would be forced to resign over this debacle. Watch a willing media skip over this blithering incompetence and praise Dan Andrews for bringing forward the timeline to reopen the economy from lockdown because of his stewardship which he will end reneging on.

Let’s not forget the omnibus the premier is trying to ram through parliament which will allow unqualified public servants to arrest and detain Victorian residents indefinitely on the grounds of suspicion alone. No facts. Just a hunch they think one could be up to no good.

The side of Trump the media will never show.

The same liberal media types who can’t help but try to smear his wife, secretly pray for a marital split and speculate on the size of Trump’s package.

Whether Bette Midler ridiculing her English skills or John Henson slut shaming the First Lady. Attacking her for wearing Timberland boots or a pith helmet in Africa. Everything is focused on the negative. Even donating Dr Seuss books by FLOTUS to children was regarded as a treacherous act by the left.

Orange man bad. Even peace deals are deserved of scorn and the catalyst to end the Nobel Peace Prize.

Woman had a TDS meltdown over a MAGA street corner rally then proceeded to hit the vehicle in front of her while police were behind her 🤣pic.twitter.com/rEVEGeKNaj

If you think you’re having a bad day, spare a thought for this unhinged liberal who decided to sound off at Trump supporters while behind the wheel and crashing into the car in front all the while providing front row seats to the police behind her.

We always wonder how showing such intolerance can endear normal people to think the opposition is a viable and credible alternative.

What a pack of total frauds. This montage exposes the utter hypocrisy of the Democrats.

Beyond this hypocrisy, is this idea that if the Dems get power in the Senate they’ll look to increase the SCOTUS bench to 11 and ram in liberal judges to skew the judiciary.

So on the one hand, Democrats are saying RBG’s dying wishes to hold her vacancy til after the election should be respected. On the other hand they are ignoring her very own words with respect to numbers on the bench:

“…nine seems to be a good number; it’s been that way for a long time” adding that “court packing” was a “bad idea.“