No beating around the bush. Tesla’s cash-flow situation resembles that of One.Tel in Australia before it became insolvent. Rocketing financing and investing cash-flow with troubled operating cash which in Tesla’s case was flattered by some accounting trickery.  The Q4 2017 earnings release spoke of fairies and magic pixie dust for the most part. Q1 deliveries to date look to undershoot.  Once again a promise to hit production of 2,500 Tesla Model 3s by the end of Q1 and 5,000 a week by end of Q2 2018 (i.e. 6 months away). Note that Tesla had about 860 undelivered Model 3 cars at the end of Q4. That is a high ratio given 1550 were shipped in Q4.

While the company claims a cash balance of $3.4bn which many will pop champagne corks over, Tesla has accrued liabilities, accounts payable and customer deposits totaling $4.975bn at quarter end. This also excludes the $608mn in extra ‘residual value guarantees’ on the books YoY.

The company expects to break even during the year. However with gross automotive margins about to suck up the Model 3 in larger numbers that will take some doing despite claims it can do 25% vs the existing line-up’s 18% range. As at January, Q1 sales in the US are at 2016 levels and European registrations are down around 14% in aggregate across Norway, Holland, Italy, Belgium, Sweden, Austria and Switzerland. Lots can change but it doesn’t read well to kick off 2018’s challenge to break even at an operating level. The Model 3 is on average two-thirds cheaper than the average selling price on existing products so to even hold margins constant will take the mother of all cost cutting all the meanwhile facing new competition over 2018 which will weigh on pricing.

Interesting within the operating cash-flow statement is a term “Changes in operating assets and liabilities,net of effect of business combinations” which shows a quarter on quarter swing of $746.8m pushing net operating cash to +$509mn achieving a new quarterly record. This was achieved mainly by improved collection of receivables (believable), inventory reduction of finished vehicles (were incomplete vehicles that left the factory to parking lots yet to be delivered due to a lack of parts counted?), improved working capital from the ramp of Model 3, and growth in customer deposits (this was only  $168m QoQ vs expectations of $400m) from Semi and Roadsters that were announced with fanfare during Q4. Cash burn appeared lower because the company included customer deposits for the upcoming Semi and Roadster in its operating CF. That is slightly deceiving because deposits aren’t supposed to be drawn from current operations. The Roadster is supposed to be ready by 2020. This seems odd.

Tesla wrote “Despite the delays that we experienced in our production ramp, Model 3 net reservations remained stable in Q4.” Strange there was no mention of progress on Roadster and Semi orders in Q4. Was the $250,000 deposit within 10 days for the Founder series Roadster a bit steep? Truck orders seem around 600-700 at this stage and at $5,000 a deposit, generously speaking $3,500,000 isn’t a swing. As mentioned earlier the +$168m in customer deposits could only reflect how poorly orders for those vehicles are tracking such is the need to avoid talking about them in the statement (surely something to crow about) other than projected performance stats.

Capital expenditures in 2018 are projected to be slightly more than 2017 according to the statement. Tesla also mentioned “quarterly operating income should turn sustainably positive at some point in 2018.” That is a hugely optimistic target for the company which has failed so many times to deliver on promises. As CM always argues, the ‘cult’ following of Tesla is a dangerous vixen which can keep the ‘dream’ floating in orbit when reality is that “Nevada, we have a problem”.

The market can stay irrational longer than you can stay solvent. The 3% bounce in the shares reflects that blind optimism. Our study shows that even if it made margins similar to mainstream makers it is grossly overvalued. 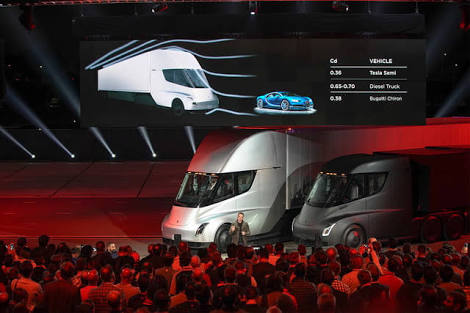 Tesla has bagged 55 orders for the semi so far. Although it is no surprise that no major truck hauling companies have signed up. Funny that. To expect trucking companies who operate under strict cashflow constraints (afterall they’re businesses not wealthy consumers) to give Musk a $200,000 upfront deposit (aka interest free loan) per ‘founder series’ truck is to put in Tesla lexicon – ludicrous. Truck companies, as CM wrote in its 30 reasons why Tesla is likely to be a bug on a windshield, are conservative. They want to see the technology proven in the field before just forking over $150-200,000 and hoping for the best. Were the technology or charging infrastructure to come up short then the whole economic proposition would come unstuck.

If we used the $60,000 more expensive Tesla Semi can to recoup the difference then it will need to be driven 240,000 miles using the $.25/saving per mile vs diesel Tesla number. Some estimates suggest payback in 3-4 years.

“I was surprised when I saw this “two-year” payback period quoted by Musk last week and repeated on the website. Two years? Really? He had just gotten through showing us an operational cost savings of $.25 per mile over diesel.

Well if I am going to pay back the truck I need those savings to equal the purchase price in two years. Well $180,000 divided by $.25 is 720,000 miles or 360,000 miles per year. That is not even physically possible. A truck would have to drive non-stop for 24 hours a day, 365 days a year at an average speed of 41 mph. Subtract out recharging time of 30 minutes every six hours or two hours per day and four hours per day for loading and unloading and the truck must average 54.7 miles per hour for every mile driven. It is impossible to do.

My big trucks ran long trips moving from coast to coast or north to south. I pulled out my records just for the fun of it and my trucks averaged 13,000 miles per month in summer months and under 10,000 in winter months because of weather and tougher loading and unloading conditions. Most trucks ran about 120,000 miles per year maximum even with driver teams. This was due in many cases to operational time limits of over-sized loads (half hour before sunrise until half hour after sunset is mandatory in many states for safety reasons).“

Whether the new Tesla Roadster or Tesla Semi this new deposit scheme is actually more telling than the vehicles themselves. This can be none other than a cash grab interest free loans to keep the thing alive. I salute Musk for his pioneering spirit but playing with the big boys is never easier done than said. Can’t wait to see the cashflow numbers in Q4 reporting early next year. If we get a worsening of this chart beware. 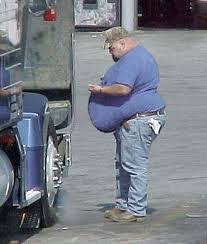 Elon Musk is rallying the call on his new truck which he is presenting this evening, albeit delayed from the initial Oct 26 launch.  He tweeted, “Tesla Semi Truck unveil to be webcast live on Thursday at 8pm! This will blow your mind clear out of your skull and into an alternate dimension. Just need to find my portal gun …”  If Elon Musk said that Tesla was superseding lead balloons with Li-ion his devout followers would fall for it as a logical progression with cumulus and nimbus charging stations providing endless power top ups. He is the ultimate salesman. One can only imagine the Tesla Semi will haul (in reality) incompleted Model 3s to double up on the promo!

It is hard not to see it as a distraction to tee up the next capital raising by revving up the share price to minimise dilution. Of course we must give full credit to Musk for his ability to rev up excitement among his faithful followers. He can do no wrong in their eyes. Spend 5 minutes on a Tesla owners forum and they are all gushing at their purchase and quick to virtue signal even when seeking help for trouble shooting whether it be a wayward navigation system or quality defects. They are followers of the Tesla cult and see their leader cando no wrong.

Still the truck is fraught with risks as we wrote at the end of last month. First, truck regulations are extremely tough. Even in America, crossing state lines has legal ramifications. While there are overall weight restrictions, there are also weight restrictions over each axle (defer to the DoT’s schematic below). So even if Musk talks of driverless vehicles (a USP for sure), a battery laden truck will likely be heavier than its diesel cousin. Higher rig weight means the less that can be hauled. Think of the Tesla 100D which weighs in at 2,250kg some 22% heavier than a fully loaded M550ix BMW.

Also truck haulage companies are hugely conservative. Risking the switch to EV trucks could put them out of business. If it takes 30 minutes to “fast charge” a Tesla car how long will it take to charge a stack likely to be at least 10 times larger (300 minutes?) in mass if it’s to have any chance of hauling 35 tonnes any sensible distance.

For the 2018 model series of the major Class 8 truck makers, most have achieved an extra 8% fuel economy gains for on highway performance to around 5.5mpg. Tyre pressure monitoring and new slipstreaming bodies also assist in the fuel savings. With a 150 gallon tank option, a driver can in theory do 1,300km. Battery-powered semi-tractors may be useful in low-speed, short-haul duty cycles, but long-haul makes little sense because of the batteries bulk, weight and expense.

The battery pack in a Tesla Model S passenger car weighs in at around 600kg. The diesel engine in a Freightliner Cascade Class-8 truck weighs around 1.2 tonnes. So if we assume that the basic Tesla Semi package (ex powertrain), is more or less the same as the Cascade will two sets of Tesla 85D battery packs suffice to give similar range? As we mentioned earlier, in order to give a similar 400km range in a truck having to haul 30+ tonnes it is easy to imagine battery packs being at least 10x the amount needed for an 85D car. So 6 tonnes of batteries replacing a 1.5 tonne engine transmission combination. That would mean 4.5 tonnes less carrying capacity for a start and even then can it be properly distributed over the axles to meet road regulations? Like the chap above, the average truckie probably cares about the environment as much as his waistline.

Tonight’s truck is only having to move around 10 miles to its event. I’m sure the list of its capabilities will be an envious list “on paper” of its potential. Sadly to CM it looks like a distraction for its struggling Model 3 production woes by selling a future that has many questions about commerciality. Cars are personal modes of transport. Trucks are a business. Trucking companies are hugely conservative and won’t risk replacing an entire fleet until it’s completed rigorous field tests. Yes Class 8 truck sales may have nearly tripled in the last month to over 35,000 units but the series is highly volatile. In the auto world Tesla is playing in a local pond of 17mn vehicles. In trucks that is more a 250-400,000 market. Unless Tesla can promise huge market share gains in a field it has little or no experience  (even though his Tesla Semi Guy was a former Freightliner Cascade head developer) in reaching any economies of scale and reaching out to 1000s of haulage companies will be a stretch.

However spectacular the Tesla Semi lunch will be expect the share price to be pumped on the news don’t be surprised if an equity capital raising is towed behind it. Remember that farside cartoon of Ralph Harrison, king of salespeople, standing on a boat waving to eskimos that he’s just sold refrigerators to? That is Musk. A magician who runs on the smell of an oily rag. Looking forward to seeing if the fanfare proves right.