From now on, every single time a politician goes up on stage to discuss coronavirus statistics he or she must include all other facts and figures related to traffic accidents, suicide, cancer, heart disease, flu and any other major cause of death to put this hysteria into perspective. 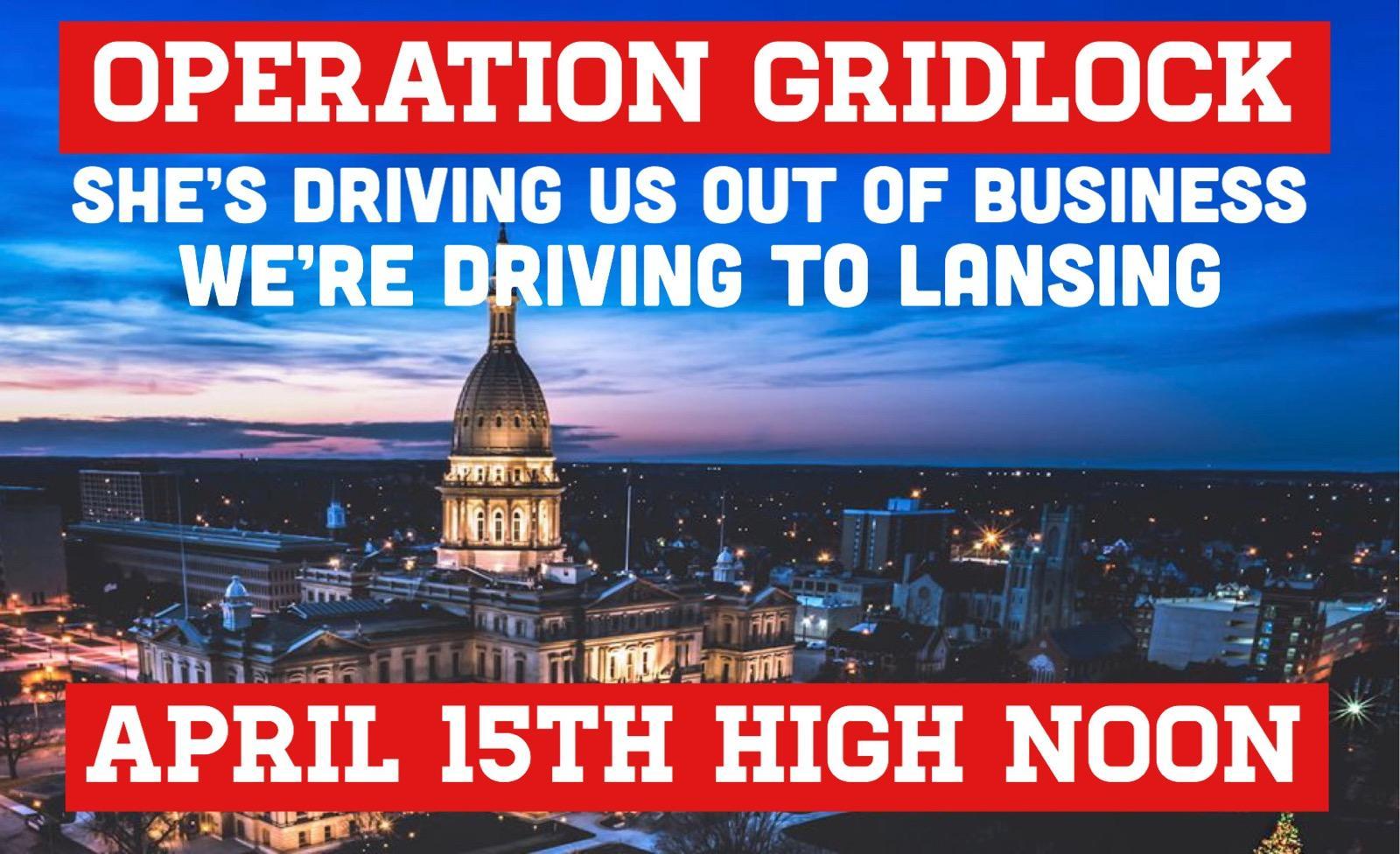 Small businesses employ 50% of all Americans. The Small Business Administration (SBA) distributed 1.4 million loans worth $350 billion under the Paycheck Protection Program (PPP). It has now run dry. Small businesses are seeking these loans which stipulate the funds must be directed to pay employees coping with coronavirus. Typically, House Speaker Pelosi and Senate Minority Leader Chuck Schumer are trying to stuff unrelated partisan pork into the bill in order to back it.

To sustain small businesses, which employ half the country, the SBA is requesting another $250 billion. Yet Pelosi and Schumer want to use the crisis to ram in more unrelated regulations to the PPP with:

While all of these items may have a place in a separate debate, surely helping half of the country’s employment providers stay alive is the bigger issue. Never mind Pelosi was happy to parade herself on late-night TV in front of her $24,000 refrigerators while the bill is delayed. We don’t begrudge anyone owning nice things, but the optics of a freezer full of $13 ice cream punnets is hardly reflective of the crisis.

It wasn’t long ago that her party wanted to stuff a laundry list of ridiculous unrelated items to the $2.2 trillion emergency stimulus last month including airline emissions standards, corporate board diversity and wind/solar subsidies.

Now that 22 million Americans are out of work, should we be surprised that 3,000 people were protesting in Lansing, Michigan demanding the economy be reopened? Or the 100s of people in Raleigh, North Carolina.

Do they have a point?

Here is the latest data outlining infections as a percentage of the state populations. The average infection rate across the US is 0.2044% of the population. That means that 99.8% of people haven’t caught it. While social distancing is proving effective, one has to wonder whether the economy can be reopened quicker than the lid on Nancy Pelosi’s ice cream.

These people rightly want the governors to start opening the economy so they can work. Jobs, jobs, jobs. Never cross an American and their belief in “rights”. We think this once again plays straight to Trump’s reelection. People are seriously frustrated and when they join the unemployment queue they are through with partisan politics.

FNF Media has always thought protests would eventually happen. The risks of contracting coronavirus versus the reward of having a job and feeding a family are now front and centre. They would undoubtedly settle for social distancing guidelines while working instead of remaining in lockdown.

We added Australia’s own state/territory data in those previous charts (yellow) which shows just how minuscule our infections and death rates are. We really need to be looking at easing restrictions sooner, rather than later. These statistics should make us all think.

The FBI posts hate crime data going back to 1996. The trend has picked up since 2014 but remains well below the 1997 peak. The type of hate crime has shifted over the last two decades. 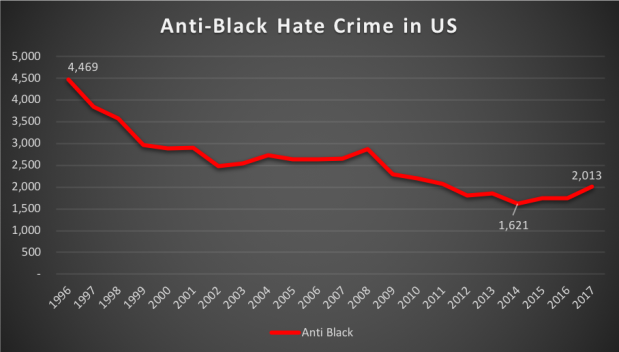 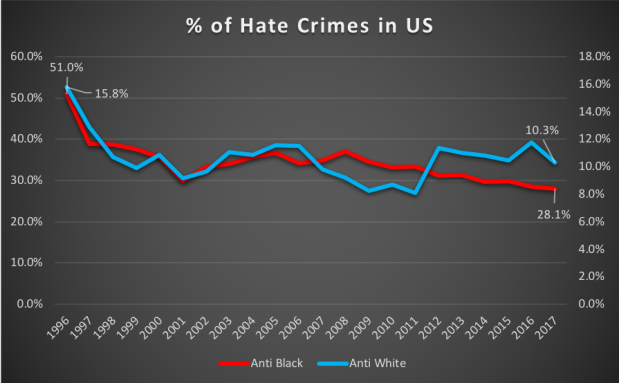 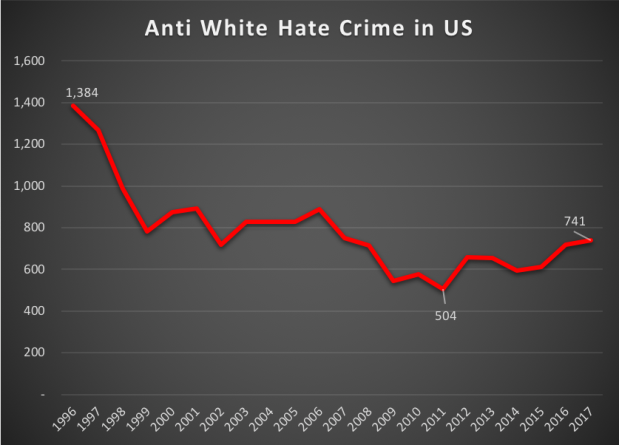 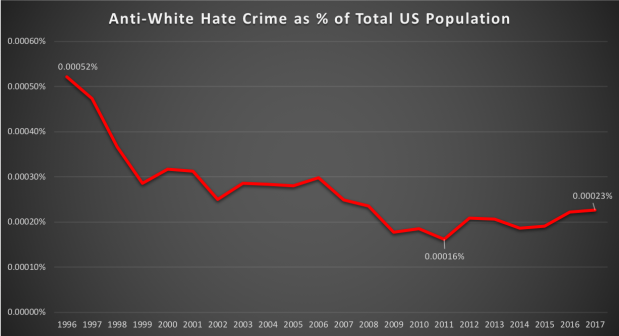 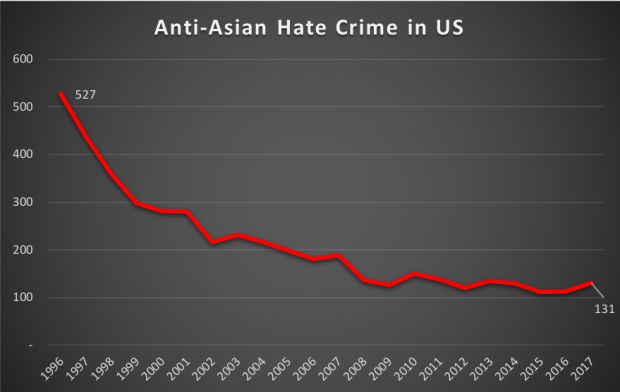 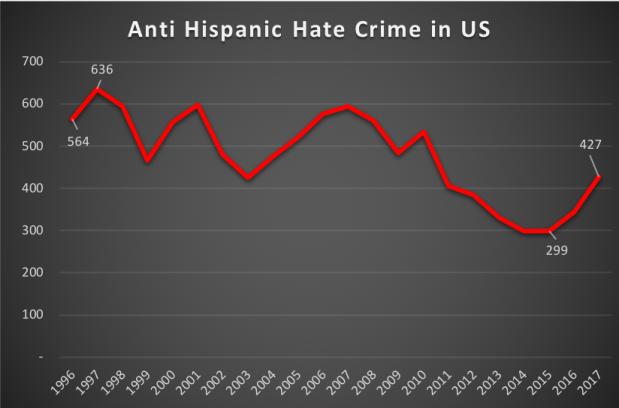 Anti Native American hate crimes trended at a very low level out to 2010. Since then they’ve surged from a low of 44 cases to 154 under Obama and out to 251 under Trump.

Anti-Semitic hate crimes remain the highest among all religions in America. They have drifted down to the low of 2014 from the peak in 1996 but in 2017 saw a resurgence to 938.

Anti Islamic hate crimes really grew since the attack on the Twin Towers. From a trough of 22, hate crimes surged to 481 and have remained above 100 since. At last count there were 273 hate crimes against the Muslim community.

Note Anti Catholic and Anti-Protestant hate crimes have remained below 100 each since 1996, although Catholics have suffered 27% more than Protestants over two decades.

One could make an argument for many crimes going unreported but the FBI data seems consistent from year to year. The trends are statistically robust in the collection. In absolute terms, the idea that America is deeply divided and hate crimes are “surging” doesn’t take into account the long term trends when based against relevant and total populations.

As mentioned in the previous article, Germany has way more Anti-Islamic hate crimes than America. Yet the mainstream media would have us believe that America is a hair’s breadth from going up in flames. Don’t believe your lying eyes or if that means that the FBI is not telling the truth…

Queue the virtue signaling. The National Retail Association (NRA) claims there has been an 80% drop in the use of “single use” plastic bags in the past three months since it was introduced across supermarkets in Australia. The irony is that this claim is not backed up by the increased sales of plastic bags from “aisle 7” so consumers can dispose of household rubbish. All they did was substitute bags, not cut down on the total use. Spuriously quiet on that front!

Who cares when one can shout out their empty environmentalism that aren’t backed by facts?

Putting the substitution argument to one side, not one group has told us what the “correct level of plastic use” actually is. Perhaps we should ban takeaway outlets for the obscene short term use of plastic trays and cutlery!

In 2006 the UK Environment Agency did a study on the effectiveness of alternative packaging solutions to HDPE (conventional plastic bags) in terms of lowering environmental impact. It said,

“The paper, LDPE, non-woven PP and cotton bags should be reused at least 3, 4, 11 and 131 times respectively to ensure that they have lower [impact] than conventional HDPE carrier bags that are not reused.”

So if conventional biodegradable plastic shopping bags are used to throw out garbage that means 6, 8, 22 and 262 days.

While we’re at it, do people realize that the majority of take away wax-lined coffee cups aren’t recycled even though you can feel good about yourself when disposing of it in the right bin? How many people elect to have their brew poured into a ceramic cup? Look next time – hardly any! The cost to recycle the 500 billion (and rising) coffee cups consumed annually is so astronomical (it is hard to separate the wax that stops the cup disintegrating because of the energy intensity involved to do so) that over 90% end up in landfill. No one talks about that 300 million tons of virgin paper used to make these cups! How many of us give it one thought when we need a shot of caffeine? Right?! Although Starbucks is trialing a 5p latte levy for those that elect to use a paper cup.

All this ban has done has inconvenience people. 60% of mismanaged plastic waste was from East Asia (i.e. China), 11% from South Asia; 9% from sub-Saharan Africa; 8% from MENA; 7% from LatAm; 3% from Europe and 0.9% from North America. Australia doesn’t even get a mention. Our impact is zero.

So much like the “save the planet” renewables movement in Australia with regards to electricity generation. Our efforts to push for less reliable sources of power which will cause higher prices will create zero impact in lowering world temperatures by 2100.

So our cutting of plastic bags will likely have zero impact on plastic waste unless we get the environmental vandals of China, SE Asia and Africa to lift up their socks. Why do we self-flagellate when we’re not the problem? Do we honestly think China cares what Woolies do inside supermarkets?

Why does the mass media not ask simple questions instead of regurgitate incomplete stats?

Believe me there is no joy in researching this topic for a whole lot of obvious reasons  but it is part of a much larger report under construction of how the world’s social fabric is fraying which I guarantee will be an eye opener for anyone on either side of the left/right divide. It will hold no punches but before people run up the flags of bigotry and bias by those who are prone to shut down debate about its content it will be balanced as this example should highlight.Remember this is the marketplace of free thought. As I often contest, many people are prone to reading headlines of poorly researched articles and this topic has found some real doozies.

A lot of media reports make bold claims that Swedish asylum seekers/refugees/ immigrants are a large wedge of total rapes and sexual assaults in Sweden.In order to get to the bottom of sensationalist reporting I spent the day delving into the official statistics bureaus of Sweden, Norway, and Denmark as well as the UN Office of Drugs & Crime (UNODC). Honestly if people actually wanted to discover the truth (assuming you trust the official statistics bureaus) it is not hard if you look deep enough.

The UNODC reports that Sweden has the world’s second highest rate of rape in the world at 69 rapes per 100,000 people. There are definitional issues with rape between countries which skews the statistics. As you can see above chart there has been a sharp increase in rapes as a % of total crimes. Crime has doubled in Sweden since 1975 but rapes have grown 7.7x with a population that has grown only 19% in 40 years. At the same time court convictions of rapists has fallen from 14% to under 3% at the same time. 1975 marked Sweden’s multicultural policy which involved a call for mass migration. One conclusion is rapes were sharply up since 2000 and convictions have sharply declined since 1985. However we have no reference within the Swedish Stats Bureau to show any correlation with the claim. There have been plenty of admissions from the Police in Sweden that they have been deliberately keeping information from the public on ethnicity (most infamously at the “We are Stockholm” youth festival) so as to prevent civil unrest. Dozens of girls as young as 11 reported being sexually molested at the event by gangs of Afghani refugee youth. It is this type of cover-up that has incited many Swedes to put their support behind the right wing Sweden Democrats who are polling as the most popular party.

As a fact checker I cross referenced bold media claims that two thirds of criminal court appearances in Denmark involved immigrants in 2011 & 75% of juvenile crimes were committed by first descendants of immigrants. Statistics Denmark (the official website) enables one to break down crime by year, country of perpetrator, age cohort and act. Even if one aggressively tried to fudge the figures there is no way such numbers could result. So any stats that I’ve seen on Denmark are complete garbage. I’m still looking to do the same for Norway.

There is a natural simplicity to blame the foreigner. Outside of murder, rape is probably considered the most despicable of crimes to be committed. However if there has been a proactive cover-up (by police, state and media outlets) of crimes committed by predominantly refugees (Stockholm & Cologne are the prime examples) who appear to be behind it you cannot expect the public to take a positive view of those in power. If the government wish to claim their policies are working then they should not feel the need to hide realities. If they continue to do so, the following blue bars will continue to lurch further right.