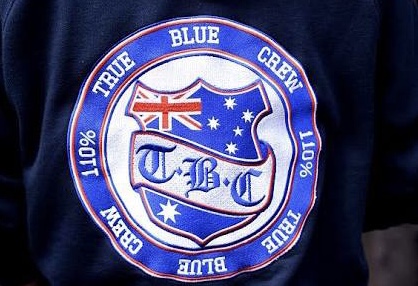 Of course the easiest thing to do is label the Melbourne-based True Blue Crew (TBC) a bunch of racist bigots. It’s members view themselves as patriotic vigilantes. TBC is a group filling the void left wide open by the politically correct who in its mind are glossing over the things that matter to everyday Australians. One can debate their motives til the cows come home but growing numbers suggest that the political class is not responding. Germany is seeing a similar wave of vigilante behavior. Is it any wonder that Merkel is struggling to form a coalition with the surge in the AfD party to 14% of the vote. One Nation is at 10%. Notice a trend?

TBC, according to its Facebook page is planning to meet and then march through the streets of Melbourne to protest a “lack of action by the courts”  They have a point. An opinion piece in The Australian this week highlighted this leniency:

“When it comes to sentencing, the courts take a sensitive approach. Ibrahim Kamara, from Sierra Leone, received a suspended sentence of just over one year, with an 18-month good ­behaviour order, after admitting to five counts, including grooming and having sex with a minor. The ACT Supreme Court judge said “(Kamara) has tried to make a good start on his life in Australia”.

In NSW, an Islamic sect leader was the first person in Australia to be imprisoned over the genital mutilation of two sisters aged six and seven. Notwithstanding a 21 years maximum, the leader ­received 11 months’ jail, while his two accessories will serve a minimum of 11 months’ home detention. This sets a derisory bench­mark for future sentencing….Judges have become politicians in robes and, like the police and other unelected authorities, selectively administer the law according to their prejudices.“

Ironically, as much as the police and political class downplay the extent of  “African crime gangs”, “radical Islamic terrorism” or “FGM” the hardware suggests otherwise. We have “Public Order & Riot Squad” emblazoned across police cars in NSW and police officers are decked out in full para-military kit including M-4 automatic assault rifles, a superior weapon to that used by the Australian Infantry. These riot cars and machine guns didn’t exist 10 years ago. While we’re told all is well, the preventative materiel speaks volumes of the concerns within. The only problem is that the voting public is not that stupid that it doesn’t notice the hardware.

TBC also plans in the 2nd part [of the meeting] to take a stand on the streets which it claims “isn’t for the PC (politically correct) so keep that in mind. PC is not going to stop people’s houses being invaded, innocent people being attacked etc.”

Why are we surprised at such groups springing up? Germany’s Federal Ministry for the Interior (BfV) updated its factbook on the explosion in left and right wing groups and the rise of Salafists at home. To summarize:

In 2016, the BKA (Federal Criminal Police Office) registered 41,549 offences in the category of politically motivated crime, an increase of 29% over the 2014 figure.

“Although this total number is smaller than in the previous years, the threat situation has not at all eased. On the contrary: the shift towards a violence-oriented/terrorist spectrum has revealed a new dimension of the Islamist scene, which was also illustrated by the attacks carried out in Germany in 2016…However, Salafism in Germany enjoys undiminished popularity. Its continuous attractiveness shows the importance of Salafism being subject to a debate in society as a whole and of intelligence collection carried out by the community of the German domestic intelligence services. This is even more significant as adherents of the jihadist tendency of Salafism not only reject the West – symbolised by the free democratic basic order – but also actively fight against it: either by travelling to so-called jihad areas or by mounting attacks in the West.”

In the area of politically motivated crime by foreigners, 2,566 offences with an extremist background were registered (2015: 1,524), including 427 violent offences (2015: 235). The total number of criminal offences in this category thus increased by 68.4%, the number of violent crimes even by 81.7%. In 2016, there were two homicides and 13 attempted homicides by foreigners with an extremist background (2015: three).

Limp wristed rhetoric and responses (this town hall meeting in Germany is a good example) by officials is a large part of the problem for the rise of such groups. When people feel marginalized and ignored for long enough they will take matters into their own hands. It is not a question of whether groups like TBC are right or wrong in their approach to street justice but law enforcement risks having the problem blow up in their face because few in the political class are willing to tell it how it is.