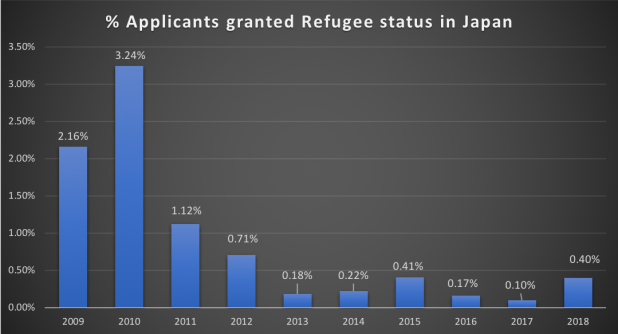 Japan is often criticised for its ‘heartless’ stance on refugees. Last year, the country let in only 42 refugees or 0.4% of those that applied for asylum. In 2009, 1,389 applications were made with 30 refugees granted status. In 2017, 20 positions were granted despite applications peaking at 19,629. Last year 10,493 applications had been made. Japan is not a signatory to the UN Global Compact on Migration.

Japan is probably one of the most successful monocultures around. 98% of the population is Japanese. It has low crime, next to no religious-based terrorism and takes a stance that all foreigners should assimilate with the culture or they will be sent home for non-compliance that breaks local laws. Japan is not interested in virtue signaling. Social justice warriors who hurl insults ignore the importance Japan places on protecting its societal values.

CM wrote last week how Germany is suffering from growing civil disruption for not protecting the culture. Japan has similar demographical challenges as Germany but the former is looking for solutions that point to more robotics and highly selective screening.

Japan still has issues with crime but the government understands that the citizens do not want a disruption to the status quo. Having lived there for 20 years it is patently obvious why they have no interest in an open doors policy.

To learn more about crime in Japan refer to:

Breakdown in the nuclear family 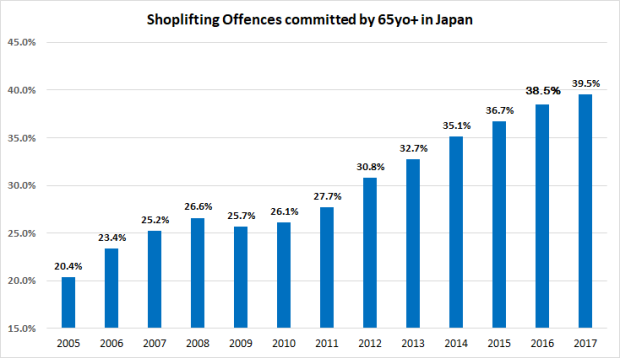 The Japanese National Police Agency (JNPA) has recorded that almost 40% of all shoplifting is being committed by pensioners. CM wrote a full report on pensioner crime and the percentage continues to climb. In February 2018, an unemployed Oita Pref. woman in her 70s was arrested for shoplifting. She stole one 163 yen (US$1.40) baked potato. While she had sufficient cash to pay she said, “It was a waste of money to buy it.” Shoplifting in Oita among the elderly is now 47.5% (26.9% in 2008) of the total, well above the 39.5% nationwide average (26.6% in 2008).

Supermarkets and drug stores account for 70% of the places crime is committed. 50% use the excuse that they have the money but don’t believe it is worth paying for. 10.5% believe that shoplifting is not a serious crime. 14.5% wanted to save some money for their pension and 11% insist they do not have enough money.

I have been asked by several people to rehash a report I wrote on elderly crime in Japan back in Feb 2016. The above link contains the entire report. Below is a brief summary.

While retirement for many of us is some way into the future, common sense would dictate that once we reach it, committing crime is probably furthest from our minds. Hugging one’s grandchildren is surely a better option than talking to them through a glass window. If you are in prison you are supposed to be old when you leave not when you enter it. Not so in Japan.

The incidence of crime committed by the elderly is soaring. 35% of all arrests for shop-lifting involve the retiree demographic, up from 20% (2001). Since 2001, their representative percentage of the prison population has doubled and 40% of repeat offenders among the elderly have committed crimes six times or more in order to return as a guest of His Excellency. While much of it is petty crime, there seems a deliberate attempt to ‘break into prison’ as a way to survive. A roof over their head, three square meals a day, no utility bills and unlimited free health care. The only real negative being the harsh prison rules about when one can talk to fellow inmates. To the state, one inmate costs ¥3.8mn to incarcerate and we estimate around ¥300,000 in court and administration fees per incarceration. Furthermore supplemental healthcare to the prison system has doubled in the last 7 years. We study the economics of what might drive someone to make the choice to commit crime and look at the government’s current funding for income support. Is it being spent wisely?

Such has been the overpopulation in prisons, the government has had to increase capacity by 50% in the last decade and boost the incidence of early release and parole to create space for what one can only guess is a way of developing state sponsored retirement villages. Female prisons are already full but the MoJ wants to increase the number of female prison guards to prepare for the anticipated increase in elderly crime.

‘Supplemental welfare’ or income support paid by the Japanese government is approximately ¥3.6 trillion per annum and spread across 5.9mn people (an average of ¥605,000 per person). ¥1.7 trillion of that total is for medical and nursing care (c.¥1.2mn per person). Note this portion of healthcare is separate from the ¥36 trillion annual healthcare budget.

What are the economic sums that drive a pensioner to consider committing crime? We surmise that a measly base pension of ¥780,000 (US$7,000) per annum won’t get one very far. When throwing on top of that healthcare, rent, utilities and food it is not hard to get someone into net-negative income territory. Sure, supplemental income through part time work may close the gap but perhaps that some are resigned to their fate to consider jail as an option.

There is another elephant in the room. Suicides among pensioners are now 40% of the total, up from 27% in 1983. One gets the feeling that all of the things that retirees had come to expect from a society is in reality against their long-entrenched cultural thinking. Wives of retirees now make up 6% of all reported suicides. They are obviously not adjusting to having the bread winner at home every day. We break down suicides by prefecture and show the clear link to elderly populations, low population growth and relatively smaller GDP compared to national averages. The economic malaise in the regions contradicts a vibrant Tokyo and much of what is going on does not get reported. Domestic violence committed by the elderly has surged 2.4x in the last 5 years. The number of murders committed are even higher.

Solutions are hard to fathom. By 2060, 40% of the population will be above 65 years of age. Would Japan be better off building large scale dormitories that would include medical facilities in return for pension sacrifice? This way these pensioners could trade off prison life for state sponsored shelters at one would expect a fraction of the cost of adding to prison population. Surely if the government met potential pickpocketing pensioners half way then it would be preferable to both parties on cost and shame grounds. Would a Benesse (9783) be interested in running a public-private initiative (PPI) to help the government build such centres given they are already investing in old age care facilities? Benesse wants to expand its elderly care business to 20% of the group total by 2020. The government has taken this approach of PPI with building day-care centres as JP Holdings (2749) has benefitted greatly from. The government needs to think of how to revitalise the regional areas. With slowing economic growth, working age employees flock to the cities where jobs are more likely. It exacerbates the pressure on the regions to survive and poses longer term risks for the companies in the region to sustain employment. PPI projects in the regions makes sense from a variety of perspectives which we discuss might alleviate the pressure 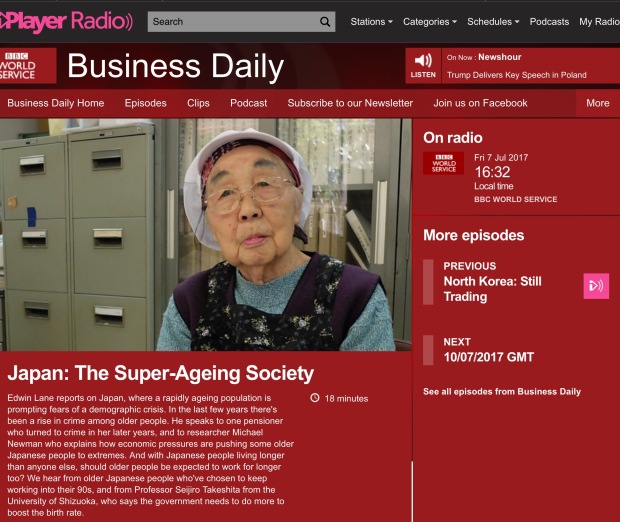 Tomorrow, BBC World Service’s Edwin Lane will release the pre-recorded interview he conducted with me several months ago on the back of a series I wrote on Crime in Japan – Part 1 – Geriatric Jailbirds, Part 2 – Breakdown of the nuclear family and Part 3 – Fraud, Drugs, Murder, Yakuza and the Police some 15 months ago. Since then the reports have been reported in 14 different languages and reached c.5 million page/podcast impressions as the BBC also conducted an interview on BBC Radio 5 “Up all night”

The reason I ended up writing the research paper came by chance. While trawling through the Japanese National Police Agency statistics looking for data to help a client on motorcycle license trends, I stumbled over the crime stats and couldn’t believe the wealth of information that showed the sharp jumps in crime levels. There is some suggestion that much under-reporting went on several decades ago but as you can see in the reports the charts speak for themselves.

On a global basis, Japanese crime is low on almost any measure but the Ministry of Justice (MoJ) has had to expand prison capacity 50% in the last decade, facilitated early release to prepare for a sharp rise in elderly inmates. The pension-age cohort in prison now represents the highest percentage of total inmates. With that the MoJ has had to apply for a supplemental budget to cover the extra cost of healthcare in prison as the average age rises.