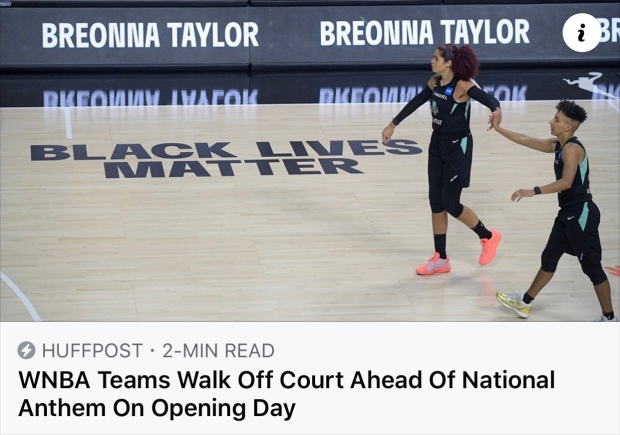 At what point in the WNBA decision making process did these woke social justice warriors ever factor in how walking off the court before the national anthem was played may have alienated their ultimate paymasters – the crowd?

Watching sports used to be all about being a distraction from the grind of life. To zone out for several hours watching professional sports stats entertain. No thoughts about work, horrible bosses or financial pain. Just fun.

Now the politics in sport have become a bigger feature than the game itself. Perhaps these teams should back themselves in their ability to read the tolerance levels of their fans and require they wear BLM adorned clothing as a condition of entry.

We will have absolutely zero sympathy if these sporting codes collapse or find themselves in severe financial distress as a consequence of capitulating to this insidious ideology and biting the hand that feeds them. 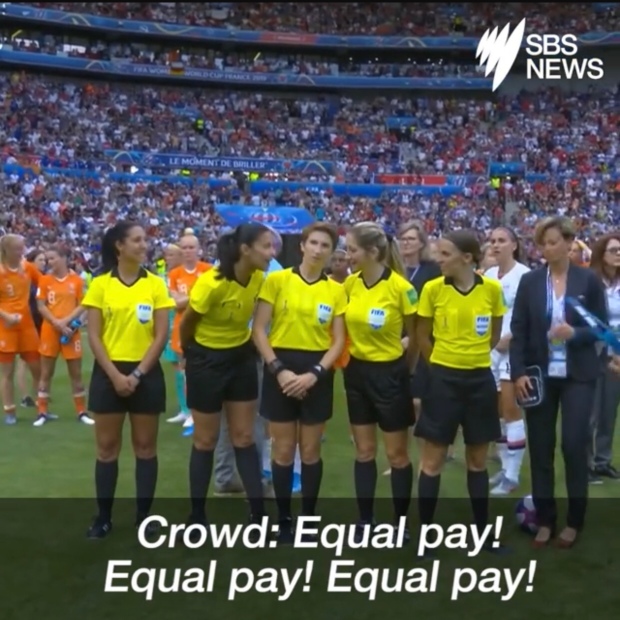 No longer is pride in representing a nation the core of a major sporting event. It is all about activism and grievance. The oppression obsession. The crowd joined in shaming the FIFA boss and the United States Soccer Federation (USSF) based off little or no true understanding of the facts at the women’s World Cup Final. The stadium would have made Kim Jong-un blush at the symbiotic coordination. It felt eerily similar to the crowd scene from 1984. It is unfortunately so telling of today’s society. Never have they had it so good, but act is if they’ve never had it so bad.

However isn’t the point of playing for one’s country about the “pride” in representing it? If Rapinoe hates Trump, that is one thing and her personal choice. She is not alone. Should her personal pet grievances outweigh the 330m other Americans she represents? Why not ask for the flag to be removed from her strip?

If she wants to kneel during the national anthem she is nothing more than a hypocrite who seeks to rub it in the face of those who have pride in their country. She is a conditional citizen. Much like those Hollywood celebrities who claimed they’d leave the country if Trump won. He did and they’re still all there.

If Rapinoe wants to truly protest, she should refuse to play. She should sit out and watch America flail and then witness the USSF panic as sponsors dry up and have them run to her. Yet the trappings are such that her principles take a back seat to the expediency of the luxuries afforded by her talent.

She can rant all she wants outside the field. Free speech. CM is all for that. She has a profile to do that. Yet when representing the country, why not respect her fellow citizens rather than throw the toys out of the pram using profanity against a democratically elected president? What she doesn’t realise is her wokeness is exactly the type of thing that will produce the same result in the 2020 election. People are sick and tired of the constant political correctness dragged into places it needn’t be. She is only going to retard the growth in the sport if she continues turning a beautiful game into a platform of white noise.

Rapinoe may tell the media that “we’re over it” with respect to equal pay. However has she considered that if she stopped being such a brat that even more sponsors might beat a path to her door? If she displayed the types of values that represent those of the sponsors and broader society rather than lower the level to the man she repudiates she might surprise herself? Set the standard, Megan! Don’t lower yourself to it. Is having a high number of LGBT players truly the secret sauce of the US team as you claim?

What if men identifying as women demand a place in the side? Physically they’ll dominate the women players as they are already doing in so many areas of sport. Don’t they deserve an equal opportunity? If they trial and outplay all the biological women, will you begrudge them? Or accept that “Science is science. Trans rule“? The Democratic Party has enshrined trans players in women’s sports as policy. Be careful what you wish for. 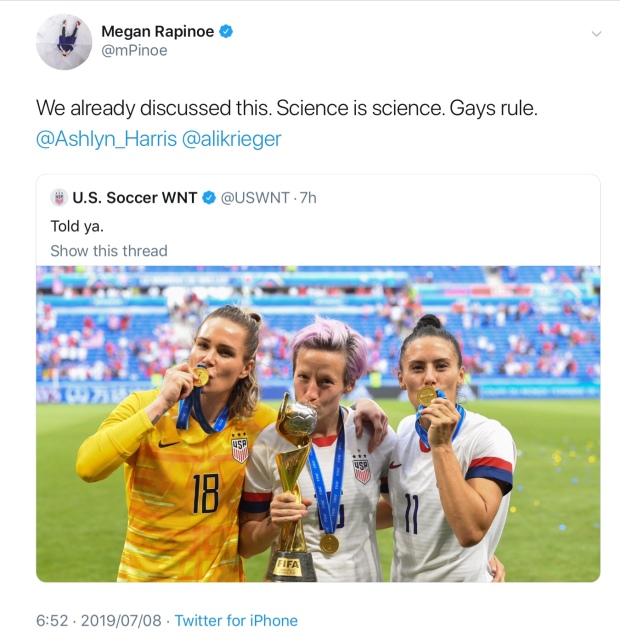 For the record, CM has always stated equal pay in sports is a farcical quest. It has never been equal. Nor should it be, because the talent pool would never be able to be developed in a way that is self sustaining for the audiences to watch it. Cristiano Ronaldo gets $100m per year because he is “that good”. He sells more strips each year than his fellow teammates. He scores lots of goals. He gets endorsements because he is so talented. Corporations see a return in the investment. Ronaldo has 78 million Twitter followers vs his Real Madrid captain, Sergio Ramos who has a pitiful 16m. Rapinoe has 725,000. Should she get paid the same as Ronaldo? US men’s soccer team player Landon Donovan has 1.3m followers. Does the USSF see that the box office is sadly still skewed to the men’s game?

If we truly want ‘equal pay‘, shouldn’t we demand that each player plays for exactly the same amount of time and limit the physical distance they run? After all it would be unfair for one player to do less or more work than another. If the goalie had to be included in the physical exercise equality argument then field players could only have a two minute stint at best. 10 players would need to be replaced every two minutes of the 90 played meaning a 450 player side. With GPS tracking, the rules of the game can be changed so that can be accommodated in theory.

We know that such a game would be boring to watch and cause audiences to abandon such spectacles because professionals sports require no participation medals. We cheer the player that has the extra stamina, skill and guile to win matches and pay to watch that privilege. Not watch a game where talent is castrated.

For starters, Rapinoe should address the inequality within women’s soccer, before targeting the broader gender pay gap. No doubt she gets paid a lot more than some of her lesser known teammates. No one discusses that factoid. Crowds consumed by propaganda based group think champion the causes of people who already earn probably way more than they’ll ever do. Were the crowd chants aimed at the Dutch women too? Or just the Americans who were the ones fighting this pay dispute.

CM is also on record for saying that female tennis players should be paid more than men for the higher audiences they attract. The reality is outside of the World Cup, women’s soccer does not attract the revenues of the men’s game (partly due to men’s game having decades more time to develop). That will take time. It is hard to find willing sponsors to even it up if the return on that endorsement is lower. Sponsors aren’t just rich benefactors.

In closing, shame on the crowds for dragging an international event into a twisted spectacle. What they don’t realise is that such actions will only work against them. Fans want to escape the stresses of daily life, not pay high ticket prices to have it directly served up. Maybe the #USWNT needs to look at what has happened to the NFL after political correctness engulfed it.

Megan, a bigger truism is that, “Economics is economics. The market rules!” 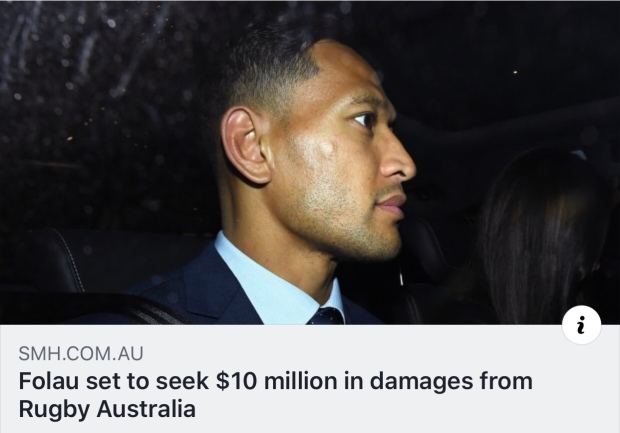 What did the Rugby Australia (RA) board expect from Israel Folau? That he’d crawl away into obscurity? CM has long held the RA’s handling of this affair has been about as good as the Wallabies on-field performance under Michael Cheika, the coach with the worst record in the history of the team.

Industry gets the management it deserves. Bad outcomes come from poor decisions at the top. RA CEO Raelene Castle’s performance in this affair has revealed she has no crisis management credentials. If Folau ends up bankrupting RA then management didn’t weigh the risks properly when they terminated him for a supposed “high-level breach”.

Recall RA tried to buy Israel Folau off with a $1m shut-up cheque but his religious beliefs weren’t for sale. Folau reached out to former Wallaby and fellow devout Christian, Nick Farr-Jones, who concluded after an intense grilling that his faith was authentic. Did the board take into account NF-J’s testimony?

The RA’s decision smacks of the spineless virtue signalling that pervades our corporates today. It folds at the first sign of social media activist pressure. It might bang on about “inclusivity” but it practices exclusivity. One wonders if a player from another religion tweeted “apostasy is death” the board would have sung an entirely different tune. It would have said, “we respect all views.”

Then we saw the hypocrisy of NRL Chairman Peter Beattie who spoke of the importance of inclusion and freedom of speech (when it comes to players protesting the national anthem) despite affirming that Folau would never play rugby league. So which is it? Whose freedom of speech is free? Beattie even argued that the Folau Twitter post still remained up. If he took it down would the NRL sign him up? Not a chance.

As CM wrote in the last dispatch, RA’s #1 priority does not appear to be rugby. The website is flush with identity politics. Such as this:

“MCC works with influential leaders and encourages them to take action towards gender equality.

Rugby Australia is a proud supporter of MCC and our Chief Executive Raelene Castle has recently been appointed as a Special Advisor on the MCC Sport program.

This program aims to enhance the involvement of women in all aspects of sport and works with key stakeholders to achieve pay equity.”

What has this got to do with managing the Wallabies franchise? Too much focus on irrelevant things that will not turn around the continual losses in the business because the key ingredient that generates revenue – a winning team is second fiddle.

RA folded at the foot of the sponsor, Qantas. A sponsor has the rights to be represented in certain ways but how little confidence must RA have in its ability to attract new backers? Cricket Australia snagged Alinta Energy after the ball-tampering scenario. CM reckons the Adani Wallabies has a nice ring to it.

RA is not run for its fans. Player David Pocock was arrested and charged for chaining himself to a piece of heavy equipment but Folau was fired for quoting a passage from the Bible.

It is quite likely that Folau’s bid in the High Court will succeed. Our constitution enshrines free speech. Whether we like what he said or not is irrelevant. We either support it or we don’t.

Maybe RA needs a total clean out? Perhaps sending in the receivers would see the appointment of someone who loves the game and reconnects with the fans, not waste time trying to enforce identity politics on them.  RA was set up for one purpose. To win.

Why not look at the yardstick of attendance? Why is it since 1962, Eden Park in Auckland is always at full capacity when the beloved All Blacks play? Because the team is so dominant. Why is attendance at Stadium Australia at 65~80% of available seats when it used to be 100% in 2002-2009? Why have Super Rugby attendance figures slumped t to around 11,000 per game vs 35,000 for Aussie Rules and 15,000 for NRL? Even A-League soccer gets average game attendances of 12,500. There is a message here RA. You are not connecting with the flock.

Perhaps Izzy Folau is reciting in prayer for the fans;

“For I know the plans I have for you…plans to prosper you and not to harm you, plans to give you hope and a future.” – Jeremiah 29:11