No one should take anything away from the tremendous 99.15 ATAR result of Varsha Yajman, one of the key figures of the school climate strikes.

Yet how quickly the lefty media and climate change activist Mike Cannon-Brookes seized on the opportunity to take a potshot at the PM Scott Morrison because of his request that kids stay at school and study rather than attend climate protests.

It would be more interesting if we were able to look at the aggregate results of those school kids that took a day off to protest to get a better sense of impacts. Easy to select an Adani earring wearing teen as if she was the median or mean score when it is quite likely she was an outlier.

Could the school’s curriculum and approach to teaching be an issue? If I was dropping $34,000pa on my kid’s education I’d be asking for my money back. It is a disaster.

Newington’s own motto, ‘in fide scientam’ (in the faith of all knowledge) doesn’t align with the statement from the school,

“Newington College also accepts the reality of climate science. We consider that climate change caused by humans is an urgent issue, particularly for young people. We understand the importance of student critical thinking and student voice in addressing this singularly important issue. We thus support the decision of our boys whose parents have given them permission to be absent to represent their views about climate change at the climate march on 20 September.”

Is this what a balanced education (relying on the IPCC, an organization that is woefully governed, scandal clad and forever climbing down from alarmist claims) buys?

Or maybe the parents have more money than sense to let them protest?

Follow the data, people. Apologies for the amount of climate change related posts of late. It is the climate alarmist silly season. The video above shows how easy it is to manipulate mindsets. Good to see that our PM Scott Morrison was thinking about smart drive-thrus. After all, as we showed, kids love McDonald’s ahead of climate strikes so merging technologies and fast food should connect the next generation. Uber should be looking to develop their rideshare app to go via fast-food chains. ScoMo has his finger on the pulse.

Atlassian billionaire Mike Cannon-Brookes doesn’t agree although he did reveal what an expensive Bellevue Hill private boy school education does for teaching how to respect the highest public office in Australia. ScoMo was dead right not to attend a summit where the organizers deliberately banned those from coal-related nations from speaking whilst demanding their cash. No need to join a summit where most of the attendees are from nations with high levels of corruption and have a sole purpose to cash in on the guilt of weak-willed western nations. 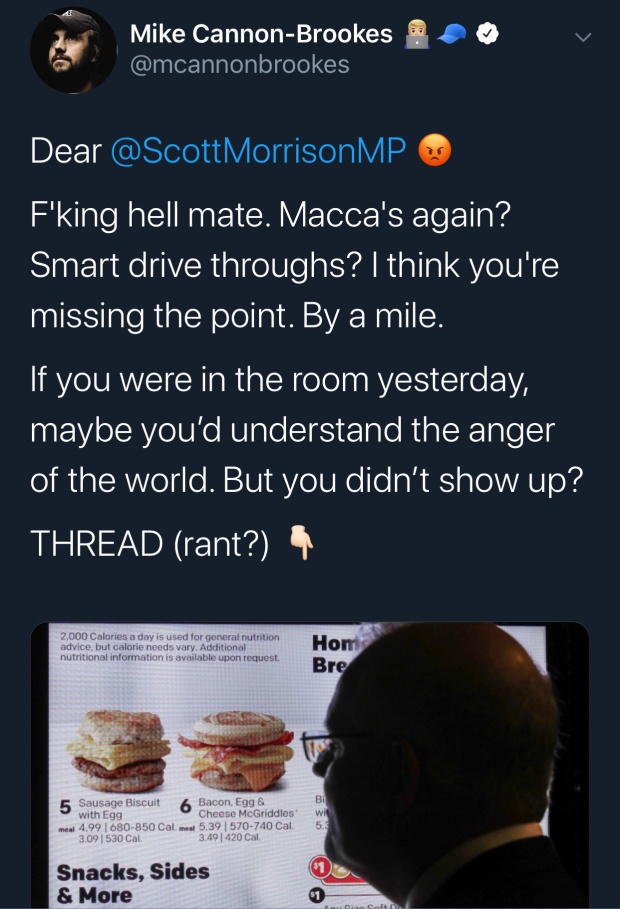 Maybe MC-B should reflect on what the UN summit does to cause children to meltdown thanks to irresponsible adults feeding them with unfounded scaremongering. That is where the anger should have been placed in that room. Who needs to show up? Then again behaving like children is a bit of a theme at climate summits. Profanity too.

Being a successful software developer doesn’t always extend to being an axe in other fields. CM also made reference to why MC-B should be supporting the Minerals Council of Austalia as so much of his business actually relies on it.