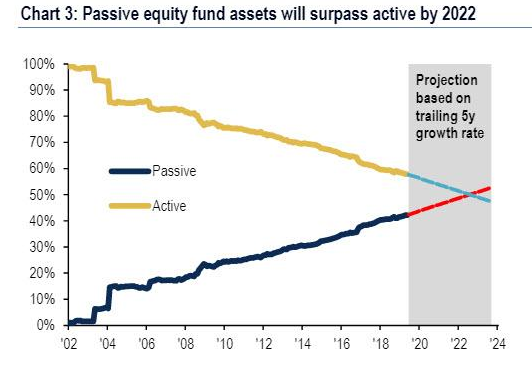 CM knew a lot of passive indices existed but not to this crazy extent. Probably explains why there is so much stupid money tied up in me too commoditised investment products. 4 years ago CM wrote a piece on the dangers of ETFs (especially leveraged)  and passive products in a downturn. These products predominantly follow the market, not lead it. So if these products end up stampeding toward the exits in a market meltdown, the extent will be amplified, especially those levered funds potentially making market panic look worse than it really might otherwise be. Don’t be surprised to see the mainstream media sensationalise the size of any falls in the market.

According to Bloomberg, 770,000 benchmark indexes were scrapped globally in 2019…however  2.96 million indexes remain around the world, according to a new report from the Index Industry Association…There are an estimated 630,000 stocks that trade globally, including c.2,800 stocks on the NYSE and c. 3,330 on NASDAQ or 5x as many indices as there are securities globally.

“ETFs are hitting the market faster than the dim-sum trolley can circle the banquet hall. Charles Schwab, in the 12 months to July 2015, saw a 130-fold preference of ETF over mutual funds given their relative simplicity, cost and transparency….

…ETFs, despite increasing levels of sophistication, have brought about higher levels of market volatility. Studies have shown that a one standard deviation move of S&P500 ETF ownership as a percentage of total outstanding shares carries 21% excess intraday volatility. Regulators are also realising that limit up/down rules are exacerbating risk pricing and are seeking to revise as early as October 2015. In less liquid markets excess volatility has proved to be 54% higher with ETFs than the actual underlying indices. As more bearish market activity has arrived since August 2015 we investigate how ETFs may impact given a large part of recent existence has been under more favourable conditions…

…CEO Larry Fink of Blackrock, the world’s largest ETF creator, has made it clear that
leveraged ETFs (at present 1.2% of total ETF AUM) have the potential to “blow up the whole industry one day.” The argument is that the underlying assets that provide the leverage (which tend to have less liquidity) could cause losses very quickly in volatile markets. To put this in perspective we looked at the Direxion Daily Fin Bull 3x (FAS) 3x leverage of the Russell 1000 Financial Services Index. As illustrated in the following chart FAS in volatile markets tends to overshoot aggressively…

…The point Mr Fink is driving at is more obvious with the following chart which shows in volatile markets, the average daily return is closer to 10x (in both directions) than the 3x it is seeking to offer. This is post any market meltdown. On a daily basis, the minimum and maximum has ended up being -1756x to 1483x of the index return, albeit those extremes driven by the law of small numbers of the return of the underlying index. Which suggests that in a nasty downturn the ETF performance of the leveraged plays could be well outside the expectations of the holders.”

CM has said for many years, where CDOs and CDSs required the intelligence of a mystical hermit atop a mountain in the Himalayas to understand the complexities, ETFs are the complete opposite. Super easy to understand which inadvertently causes complacency. Unfortunately, as much as they might try to do as written on the tin, the reality could well turn out to be the exact opposite.

Hence CM continues to believe that stocks with low levels of corporate social responsibility (CSR) scores like tobacco companies such s Philip Morris, JT and Imperial Tobacco, as well as gold/silver bullion,  look the places to be invested. Cash won’t necessarily be king because the banks are already in a world of pain that hasn’t even truly started yet. Aussie banks look like screaming shorts at these levels. The easiest way for the plebs – without access to a prime broker – to do this is to buy put options on individual bank names. Out of the money options are dirt cheap.

NB, none of this constitutes investment advice. It is a reflection of where CM is invested only.