Never mind that crime, shootings and murder rates are going through the roof, Chicago Mayor Lori Lightfoot decided to dress up in a Halloween costume to discuss COVID-19 and other issues.

Do businesses that have been crushed by the draconian lockdowns imposed by the mayor really see any humour in any of this?

Totally out of touch. Best explained by this leaked conference call with her aldermen. Profanity warning.

Dan Bongino compiles a solid list of Democrat leaders neck deep double standards. They believe the public is there to serve them, not the other way around. 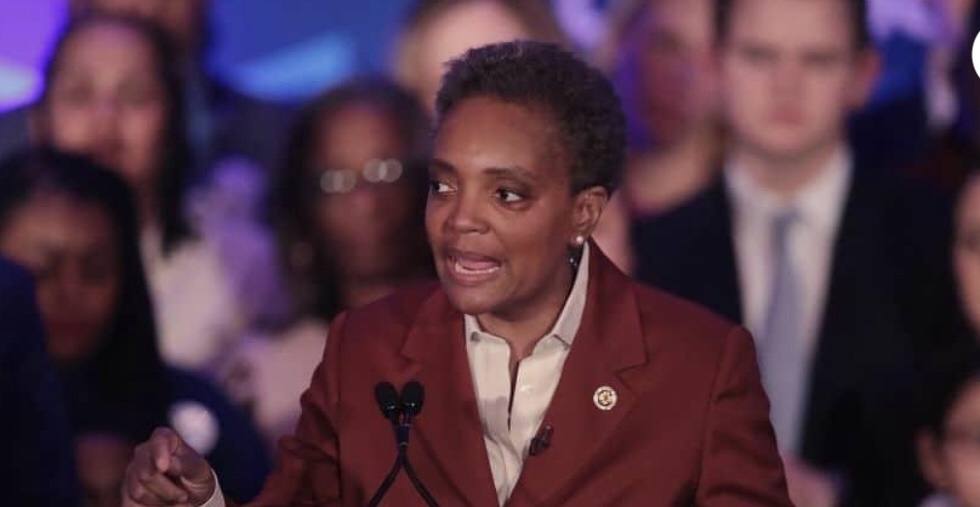 You have to hand it to Chicago Mayor Lori Lightfoot. As crime surges in her city due to her utter incompetence, she banned protests around her neighborhood block. Chicago PD has been authorized to arrest anyone who refuses to leave.

…I’m not going to make any excuses for the fact that, given the threats I have personally received, given the threats to my home and my family, I’m going to do everything I can to make sure they’re protected…I make no apologies whatsoever for that.”

Amazing how the policies she prescribed have led to so much of the very violence that occurs in her city. Perhaps if she had shut down the mobs and enforced law and order she wouldn’t be requiring taxpayers to divert funds to defend her fortress while everyone else suffers.

We think that political leaders should live with the very security and policing standards they expect others to endure. Maybe that way they might be incentivized to find solutions instead of appeasing the mob while taking care of personal interests.

All class. Rioters decided that terrorizing sick kids and their families inside a Ronald McDonald House in Chicago was a thing.

Lisa Mitchell of Ronald McDonald House Charities said staff were “frightened” and families were put under “additional stress and worry” over fears that they wouldn’t be able to get to the nearby Lurie Children’s Hospital if necessary.

We hope karma is swift for these ‘peaceful protestors.’ Utter bastards with zero morals.

Surely those bright spark Democrat mayors in NYC, Chicago, Portland and Minnesota can work out that defunding the police might cause a spike in crime and gun violence? That curtailing what actions are at the disposal of the police would hand these cities over to the criminals.

Murders in Chicago more than doubled compared to the same month last year, according to the Chicago PD. In 2020 there have been 430 homicides. In July, murders are up 139%YoY.

In Minnesota, gun violence is up 72%YoY. Mayor Jacob Frey said., “Year-to-date this has been a higher shooting victim total than the last five years, with 288 victims. The next closest is 2016 with 178.”

In Portland gun violence is up 4-fold. From July 1-13 there have been 42 shootings vs 11 in the same period last year.

And guess what, NY State Governor Andrew Cuomo has admitted concern that wealthy taxpayers could leave NY for good.

Roadway Moving President Ross Sapir has said his company has experienced its busiest season ever since it was founded. United Van Lines CEO Marc Rogers also said over 60% of those leaving NY are earning north of $100,000.

Tax collections have plummeted during coronavirus, falling 42% in June. Losing the wealthy for good could leave gaping holes in the budget. Cuomo might argue they left over COVID-19 but soaring gun crime is hardly an inducement to return after the pandemic passes.

Still, these Dems keep assuring us, “we’ve got this under control.”

As murders and shootings skyrocket in NYC as NYPD officers quit in droves, Mayor Bill De Blasio thinks that the most pressing issue in NYC is a study of the official seal depicting a Native American and a white male settler and whether it is appropriate for the times.

Here we were thinking that Chicago Mayor Lori Lightfoot was out of touch with the Census Cowboy as crime rages in her city.

Where will NYC Mayor Bill De Blasio’s genius end? As gun crime spikes in his city, he thinks a gun buyback will solve it. Maybe cutting $1bn from the police budget might be a factor in rising crime? When his own police officers are quitting in droves and making spoof videos about the new rules he has set for interacting with suspects.

Perhaps gangsters can hand in the guns of their victims and start a side business. Who knew the mayor might end up subsidizing criminals?

Sadly, despite shootings up 253% in NYC in mid-July, the studies on gun buybacks in the US have all returned the same result – ineffective.

We are struggling to work out who is the worst mayor in America. De Blasio must be in the running. The field of incompetent Democrat mayors is deep. – Lightfoot, Durkan, Bottoms, Bowser, Wheeler, Garcetti… the list goes on.

Despotic Chicago Mayor Lori Lightfoot let rip again at President Trump for his intent to send federal troops by claiming that he was just being mean to Democrat mayors who happened to be female. She cried that Trump “only wants to make us look bad.”

No need for him to do that. You’ve done that on your own.

Lightfoot claimed she’s “getting it done” despite a huge spike in gun deaths and shootings. Her incompetence extends to the manner in which she filters out what she doesn’t want to hear as evidenced by her fracas with Alderman Raymond Lopez. She is also focusing on a census campaign during this time of crime.

She mentioned that Trump picked on Seattle Mayor Jenny “summer of love” Durkan who said that CHAZ was just a street fair. Despite the deaths and destruction to the block she only acted when her own $7m mansion was at stake. Could that be a reason Mayor Lightfoot?

DC Mayor Muriel Bowser was also mentioned by Lightfoot as being bullied by the president. Didn’t she see Bowser get her head handed to her on a platter by Black Lives Matter for writing Black Lives Matter on the road outside the White House for “appeasing white liberals“?

Or Atlanta Mayor Keisha Lance Bottoms. Another target. She acknowledged that police morale is “down ten-fold” due to the limitations placed on them during the riots. Atlanta Police were calling in sick at record numbers. No surprise when the totally corrupt DA was essentially saying the cop who shot Rayshard Brooks should receive the death penalty.

What has gender got to do with it anyway?Portland’s mayor is male. He has federal officers in his city.

So Mayor Lightfoot, you may like to claim to be Chicago’s first black lesbian mayor but something tells us that if you focused on your ability rather than your identity your constituents might be happier. As it stands, identity seems to be all you have and we doubt any Chicagoans care about what goes on behind closed doors. They want an end to the violence.

Trump will make a fool of you. Make no mistake. But know it was a 100% set inflicted wound.

While Republican House Rep from Florida, Ted Yoho, apologized for his indirect profanity towards Democrat Alexandria Ocasio-Cortez, the left is still outraged.

Of course, liberals tried to connect the motivation for his comments to that of being an old, white cis-gendered male telling off a young woman of colour. Rep Yoho argued that AOC’s comments justifying “shoplifting” bordered on insanity given the congressman and his wife came from poverty.

On reflection, getting caught calling AOC a “f*cking bitch” behind her back was never going to be looked at in a positive light but where was the leftist outrage demanding an apology from Chicago Mayor Lori Lightfoot for telling one of her aldermen, Raymond Lopez, that he was “full of sh*t” when he asked her to do something about the rampant crime in his area or telling President Trump, “F. You“?

Of course, if the Left didn’t have double standards, they wouldn’t have standards at all.