A new investor to Japan once asked CM how to categorise corporate behaviour in the land of the rising sun. CM replied, “Japan is not capitalism with warts, but socialism with beauty spots.”

Latest reports confirm the Bank of Japan (BoJ) has now become a top 10 shareholder in almost 50% of listed stocks. In a sense, we have a trend which threatens to turn Japan’s largest businesses into quasi-state-owned enterprises (SoE) by the back door. The BoJ now owns $250bn of listed Japanese equities. It is the top shareholder in household Japanese brands such as Omron, Nidec and Fanuc. At current investment rates, the BoJ is set to own $400bn worth of the market by 2020-end.

The original reason for this move was to boost the ETF market and hope that Mrs Watanabe would pocket her winnings and splurge them at Mitsukoshi Department Store to increase consumption. Sadly all she has done is stuff it under the futon.

Although the government has been very public about the drive for good corporate governance, a stewardship code that drives to unwind cross-shareholdings, improve liquidity and lift returns, sadly the BoJ essentially reverses free-float and confounds the ability of companies to be attractive investments. What will happen if one day the BoJ announces it needs to pare its balance sheet back or that its holdings become too noticeable? These stocks will crater and Mrs Watanabe will become even more gun shy.

We shouldn’t forget that behind the walls of the BoJ, there is discussion to buy all $10 trillion of outstanding Japanese Government Bonds (JGBs) and convert them into zero-coupon perpetual bonds with a mild administration fee to legitimise the asset. Global markets won’t take nicely to wiping out 2 years worth of GDP with a printing press. Such a reckless experiment has yet to hit the Japanese Diet for discussion because such a move will require legislation to approve it. If it happens, the inflation the BoJ has now given up on will turn into a tsunami. 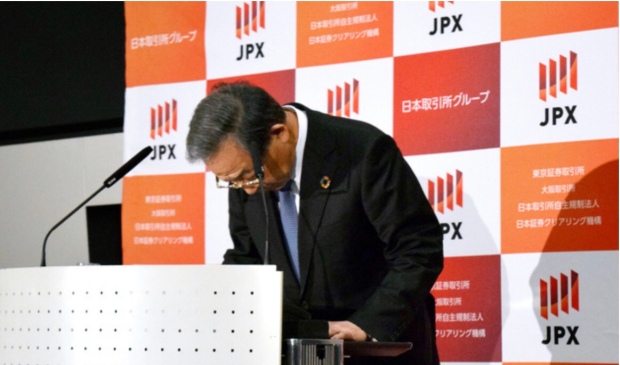 Surely as the supervisor of one of the largest stock exchanges in the world there would be sufficient systems in place to prevent such embarrassing events. A bit hypocritical to come down hard on listed corporates when the headmaster can’t follow his own rules.

As a former stockbroker, it was a sackable offense to make stock and bond investments without sign off from compliance and a manager to mitigate any risk of insider trading. It is a bit rich to suggest the JPX boss wasn’t aware of his internal rules and had he any doubt whatsoever it would have been an easy discussion had with the relevant department.

Corporate governance in Japan remains woefully inadequate. The JPX board has approved the ¥20mn (US$180k) profit made by the CEO on the initial ¥150mn (US$1.3mn) investment be given to the Japanese Red Cross. Will that be pre or post any capital gains tax? Why isn’t the board calling for him to resign? Why isn’t Kiyota resigning on principle to save the organization’s stained reputation as the vanguard of best practice?

Then again we should not be surprised. It took months for the JPX to remove/suspend Toshiba from the best in class corporate governance index (JPX Nikkei 400) after its accounting scandal became outed and there has been no investigation of Kobe Steel when blatant insider trading was visible to a novice. It leaked information about its fraudulent product specifications to customers three weeks before announcing to the market. All the tell-tale signs of heavy short selling positions on many multiples of average daily volume traded on the day of informing clients was evident. Yet nothing was even suspected, investigated or referred to the regulator.

Then take a look at the saga of Nissan. Documents have revealed former CEO Carlos Ghosn supposedly washed his multi-million dollar personal investment losses through the company as well as using Nissan money to buy several private properties in his name. That would still require the board to be willfully blind to sign off on such big ticket items or point to woeful internal controls. What governance structures could be in place when there is no board accountability over Ghosn’s actions? Being bullied by a dominant CEO is no excuse. The board should have tendered their resignations en masse.

Indeed there have been countless corporate governance lapses overseas – Parmalat, GSK, Stanford, Enron, Tyco etc- but in Japan there is little or no punishment for most executives who break laws (internal or external). Throwing the book at Ghosn will be an exception. Most C-level managers in Japan escape with little more than wounded pride.

Cutting salary for misdemeanors is woeful governance too. The biggest way to force compliance is to threaten a Japanese boss’ company car privileges. The highest status for a CEO is to be whisked around in a personal Toyota Century. Stripping it would literally force corporate leaders to do the walk of shame.

After 20 years in Japan, there is a wish buried deep down that the locals consult foreigners when dabbling with the use of English to prevent misinterpretations, especially at a corporate level. The company, Double Standard has recently been promoted to the 1st Section of the Tokyo Stock Exchange.

Double Standard Inc. principally provides business improvement and supportservices based on the big data technology.  Let’s hope it doesn’t live up to the namesake when dealing with customers.

Japan’s Sun City once highlighted to foreigners back in 2008 that it was ‘puking property inventories’ in its English press release after it ran into financial difficulties after Lehman Brothers collapsed.

The ultimate irony of the misfortunate name of Double Standard is it accurately assesses the way the authorities continue to apply the law with respect to corporate malfeasance.

Japanese investors can get star-struck with investments. In 2015, popular pop-idol band AKB-48 saw the stocks of companies it was sponsored by surge 136% relative to the market. Aggregate sales of those companies surged 46% and 30% over the following two years. Such is the ‘hayari‘ (boom) culture in Japan. Corporates know this.

Since the US Open win by tennis star Naomi Osaka, sponsors are lining up to sign her. Prior to the win, Nissin Foods, WOWOW & Yonex were already sponsors. Nissan has just signed her. Since the win, the Topix has risen a tad over 6% while Nissan, Nissan & WOWOW have risen 7.5% in aggregate. Yonex has jumped 12.2% Early days to be sure, but the likelihood is that if she is sponsored by some smaller less liquid stock names these stocks could well fly.

Forget fancy models and esoteric investment strategies. Find whatever Osaka will be sponsored by in Japan and outperform through popularity over underlying earnings performance.

Any financial firm that launched a Naomi Osaka basket would likely see massive inflows and be able to charge higher fees on the back of it. Will the marketing departments wake up?