60 Minutes never expected that President Trump would release the unedited footage of his recent interview with Lesley Stahl which reveals how the program tried to cover it up by not reporting it in the final broadcast.

With a media this complicit, expect Trump not to answer some of the questions tonight but go straight for the jugular. Is it any wonder that Biden is hidin’ again and Barack Obama is out there on the campaign trail doing his bidding.

Biden sort of reminds us of former opposition leader Bill Shorten at the time legendary Australian Labor PM Bob Hawke died in the lead up to the federal election in 2019. Everyone could see how empty a suit was Shorten compared to Hawke. Shorten lost the unlosable election.

We don’t think Obama was much chop as president to be honest, but at the very least his eloquence and demagoguery exposes just how awful Biden is.

Dan Bongino goes through the details of the source who provides evidence that the Bidens were allegedly on the take in China. That source was originally a partner until he realized what was going on.

Nothing to see here? Once again, where is the mainstream media looking to debunk this story? Silence as usual.

It seems that Hunter Biden’s hard drive has revealed messages alleging he confessed to his presidential nominee father that he paraded naked in front of a 14-yo girl on FaceTime. Dan Bongino discusses the evidence here.

The Delaware Child Abuse Prevention and Treatment Act mandates reporting by “any person, agency, organization, or entity who knows or in good faith suspects child abuse or neglect.“

The question we have is why haven’t the Bidens or their team come out and publicly denied the allegations?

The other question is why the mainstream media continues to avoid discussing this topic, even if it is to debunk it?

It looks like it will be 2 on 1 again for the upcoming presidential debate on Oct 22.

The next debate moderator, Kristen Welker, is another hardline Democrat. As you can see she is pictured with her father and the Obamas when they were invited to the White House for Christmas in 2012.

Of course the Hunter Biden email scandal is off the list of topics but does anyone believe Trump won’t go fishing there?

Welker was also hot-mic’d prepping Hillary Clinton’s comms director with softball questions when she was in the run off against Bernie Sanders.

So expect another activist moderator which we think is a better outcome in the end. Those who watch won’t be left wondering where the bias lies and Trump will no doubt troll her for doing so. 🍿🍿🍿🍿🍿

Dan Bongino goes thermonuclear on the mainstream media and tech giant cover up of the NY Post allegations about Hunter Biden through suppression.

Hunter Biden is innocent until proven guilty but the sinister behaviour exhibited by the tech companies certainly doesn’t help paint a picture of squeaky clean behaviour.

We find it galling that these social media giants have never once hesitated to promote smears against Trump, no matter how wild the allegations.

As ever with the left, it is not the principle but the side that matters.

Big tech is determined to tell users what they deem is suitable for consumption. The top screen grab is from Facebook. Head of Comms, Andy Stone, made it clear the social media giant would curtail the Biden conflict of interest news story under the guise of ‘fact checking.’ 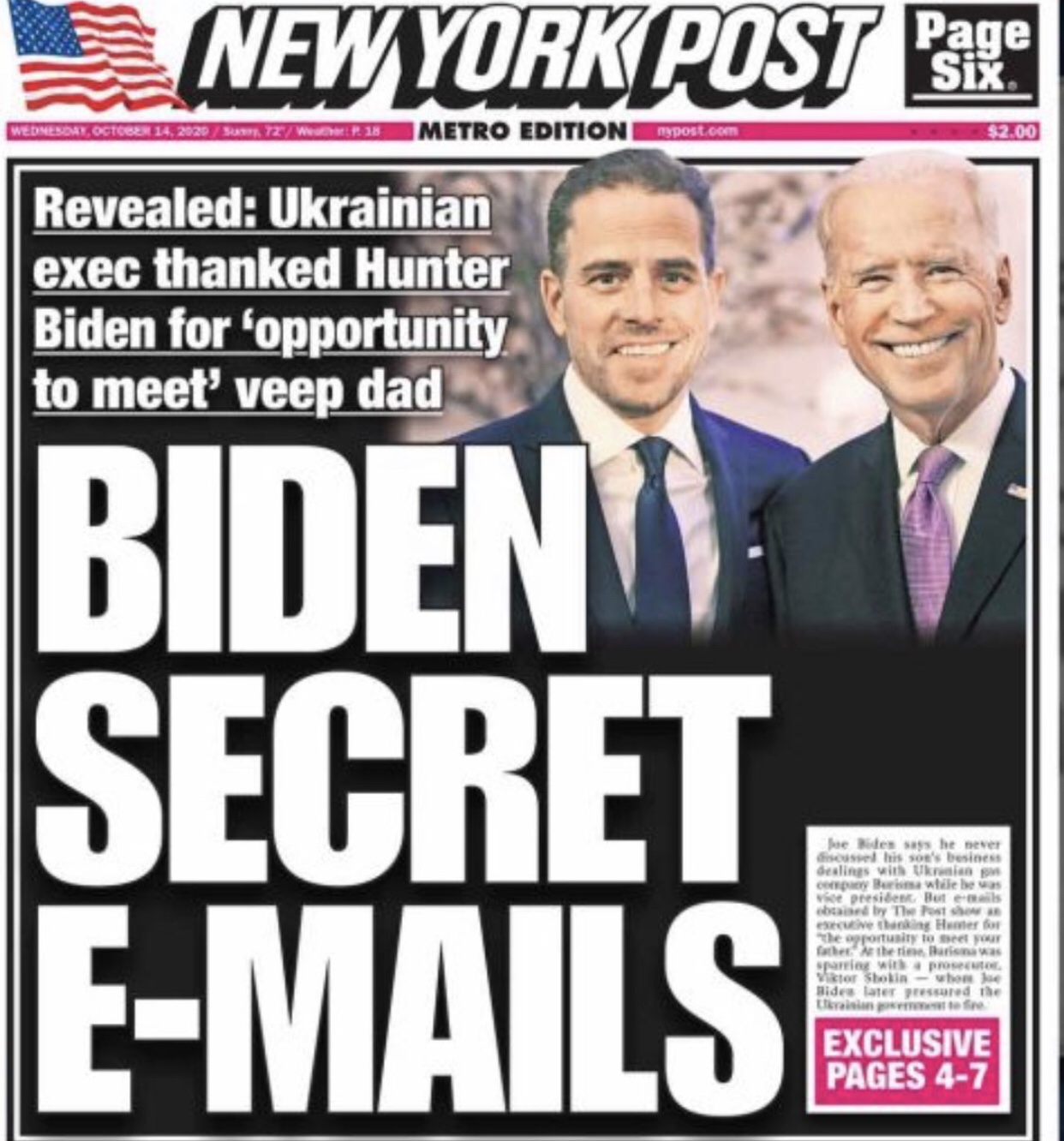 The NY Post article that surfaced overnight revealed emails from Hunter Biden’s PC which showed he was leveraging his then VP father’s relationship with Ukrainians execs.

Twitter went to an even more interesting approach to suggest the NY Post link was “unsafe” to prevent views. 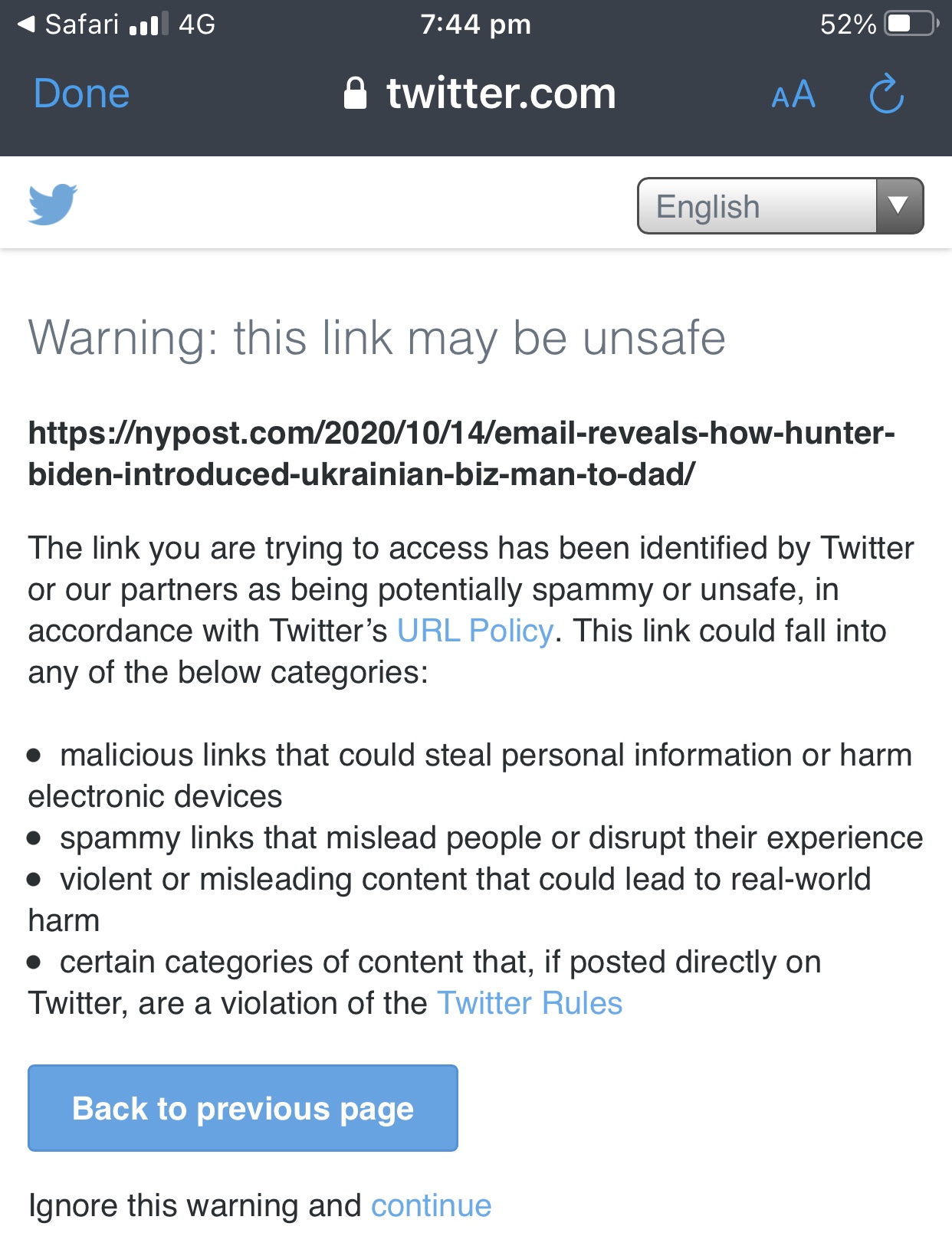 What we do know from history is that the more efforts made to cover one’s tracks, the more one guarantees to raise awareness to those problems on a stratospheric level.

Ultimately, big tech firms were granted immunity from prosecution as they promised to be mere hosts of content without fear or favour. Now that they are using discretionary editing, they should lose their sanctuary status and be liable to prosecution for suppressing free speech.

These are deep-seated liberal activist platforms. As businesses they are free to exercise commercial decisions. However they don’t have a right to flaunt laws without real world consequences.

Today big tech crossed a line and outed themselves as interfering in the election.

It has been revealed that Hunter Biden received a substantial single wire transfer of $3.5 million from Russian billionaire Elena Baturina who is suspected by the U.S. of corruption while his father Joe Biden was VP at the time of the transfer.

The Treasury Department confirmed the findings from a Senate Republican-led investigation over Hunter’s role with Ukrainian company Burisma Holdings.

So yes, Joe Biden was lying during the first debate.

House Rep Gaetz airs Hunter Biden’s dirty laundry on alleged corruption and substance abuse during the impeachment hearings. It was even deemed so bad at the time that the Obama administration needed to prepare statements for the inevitable blow up that could come out of Burisma. Nothing to see here.

Derkach publicized documents which explained the channel of getting those funds. He said,

“This was the transfer of Burisma Group’s funds for lobbying activities, as investigators believe, personally to Joe Biden through a lobbying company. Funds in the amount of $900,000 were transferred to the U.S.-based company Rosemont Seneca Partners, which according to open sources, in particular, the New York Times, is affiliated with Biden. The payment reference was payment for consultative services…According to the documents, Burisma paid no less than $16.5 million to [former Polish President, who became an independent director at Burisma Holdings in 2014] Aleksander Kwasniewski, [chairman of the Burisma board of independent directors] Alan Apter, [Burisma independent director] Devon Archer and Hunter Biden [who joined the Burisma board of directors in 2014]“…

…Using political and economic levellers of influencing Ukrainian authorities and manipulating the issue of providing financial aid to Ukraine, Joe Biden actively assisted closing criminal cases into the activity of former Ukrainian Ecology Minister Mykola Zlochevsky, who is the founder and owner of Burisma Group…Biden’s fifth visit to Kyiv on December 7-8, 2015 was devoted to making a decision on the resignation of [then Ukrainian Prosecutor General] Viktor Shokin over the case of Zlochevsky and Burisma. Loan guarantees worth $1 billion that the United States was to give to Ukraine was the point of pressure. Biden himself admitted exerting pressure in his speech at the Council of Foreign Relations in January 2018, calling Shokin ‘son of a bitch who was fired.”

Derkach added that international corruption of this magnitude couldn’t have taken place without the participation of then Ukranian President Petro Poroshenko.

“International corruption of this magnitude, as well as interference in the U.S. presidential election, could not have occurred without Poroshenko’s participation…

…We see the conflict in which the new government of Ukraine faces due to the activities of the previous president. I want to emphasize that I’m almost sure, and not only I, but many journalists, that Poroshenko personally bears responsibility for the situation in which Ukraine has ended up, for dragging Ukraine into interfering in the U.S. presidential election, for a huge number of corruption scandals and international corruption that could not have occurred without his control or participation.”

Of course, all this must be proven in a court of law, but isn’t it ironic that Biden is demanding Trump is impeached when it would seem the VP (undoubtedly in the full knowledge of the President) might have been complicit in quid pro quos with Ukraine himself.

Do we believe Joe Biden? Biden claimed he had never spoken to Burisma until a picture came out showing him playing golf with Devon Archer and his son, Hunter Biden, both directors of Burisma. Archer and Hunter were managing partners at Rosemont Seneca Partners. Archer was also a co-founder of the private-equity firm Rosemont Capital with Christopher Heinz, his college roommate at Yale. Archer had served as a senior adviser to Heinz’s stepfather, Democratic Senator John Kerry Kerry, during his 2004 presidential bid. Surely Joe never heard a peep about Burisma? Almost as believable as Bill Clinton’s chance meeting with AG Loretta Lynch on a Phoenix Airport runway, a day before her testimony on Hillary’s emails. Nothing to see here.