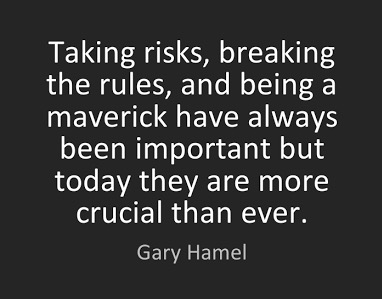 How many times have I heard over my career senior management talk incessantly about the need for new blood yet when it comes to doing anything about it with regards to new hires 99% of the time  the safe cookie cutter is favoured over the left field choice. It is ever more so the truth in the post GFC world. Managers seem afraid to take calculated risks because the left-field candidate may jeopardize their own positions if he/she fails.

As an example managers in finance often fall foul of hiring exclusively within the industry. The level of inferiority complex can be so overwhelming that they fawn at the idea a Goldman Sachs employee will work for them for some ridiculous sum. Invariably they forget that Goldman hires duds too and usually those that get cast off are in that bucket. If you are properly good, there is no incentive to leave Goldman as the salaries, opportunities and product capabilities are too wonderful vs peers.

Yet many financial firms set upon trying to change the firm into a wannabe Goldman Sachs. They forget that their clients can already deal with Goldman directly should they feel the urge. Why on earth would they choose to deal with a wannabe copy? Surely each firm has a unique selling property that is of value to clients. Why not invest and promote that rather than overlook the talent within. Who honestly values flattery? Besides, there are so many cautionary tales with hiring ex-bulge bracket employees who are so used to being spoon fed every possible product line that they struggle immensely when they are required to actually put elbow grease into the job. It is uncanny.

Some firms occasionally hire from outside the industry with huge success. Instead of financial analysts pontificating about a stock, someone who has worked within the industry has a far better feel for cycles, internal decision processes and strategy that formulates under different points in the cycle. Clients glean that value. They couldn’t care less about the stock target or valuation metrics because that ultimately is the investor’s job. Besides the history of brokers behind the curve is etched in stone. Unique context and perspective trumps commoditization every time.

Some financial (and other) professionals have such checkered histories that one wonders how on earth they get rehired. If companies viewed their hiring decisions as akin to selecting a heart surgeon for a life threatening operation, many of these people would never make the cut (no pun intended) given the body count from previous poor execution. Yet many firms continue to put quacks in their ‘surgeries’ with expected disastrous results. Generally hiring managers run interference on these bad choices to cover their own mistakes.

Many HR surveys (including Harvard) show that bad hires end up costing way more than the salary when the cost of onboarding is included. Not only do companies potentially have to foot the cost of a headhunter (25-30% of salary is a standard fee) , what follows is poorer output, the potential for incumbent employees to become disgruntled at the new hire’s lack of ability and most worryingly an increase in dissatisfied customers. If they land a toxic employee that can damage team productivity to such an extent the best performers will seek challenges elsewhere.

So in a world that is getting harder and harder to succeed in, on what basis does conventional thinking bring anything to the table but more of the same? What does hiring a competitor do other than bring similar tactics? In fact, the more telling question is if they were knocking the lights out their success would permeate within their current employer. Unseating happy employees requires dynamite way over and above what they can probably afford.  What hirers often forget is the extent to which internal human capital plays a part. How awful does one’s human capital creation have to be to consider jumping ship?

That is where the left field choice comes into its own when hiring. A person genuinely looking for career change may well be doing it because they’ve tired of several decades of the same industry. They’ll likely come full of fresh ideas, out of the box solutions and lessons from a completely different background with the passion of a new graduate.

Many companies fail to adapt because the stupid questions don’t get asked by the incumbent staff for fear of ridicule. Yet someone eager to learn may ask the most basic of questions and ask “does it work?” One company I consult had a new boss join from HQ and he questioned why staff had meetings on such trivial matters? One staff member said “we’ve been doing it for 15 years!” When the boss said “does it work?” all replied ‘not really”. Yet they offered little in the way of proposals to change what was broken.

In a sense I see many businesses that operate in status quo mode where change if ever happens on a trivial or traumatic basis not through consistent due diligence and proactive leadership.

Think of it like asking an elderly person “if you had one more day to live what would you do?” “Well I’d play golf, take my wife to an expensive dinner and drive a Ferrari” If you asked Athenia”why don’t you do it now” the response would be “well I’m not dead yet!”

Look at the successful businesses around the world today and invariably the corporate culture is likely to be open and flexible. Bosses are prepared to hire people more qualified than them because they want to learn. Show me a company where inferior staff are hired to protect a manager and I’ll show you a dud business.

Which then goes back to the most important ingredient in a tech savvy smartphone world. Analog relationships. Look at the latest recruitment sites which ask candidates to fill in fields where a computer will sift through algorithms to screen. These systems remove the most important skill in selecting good candidates – gut feel. A good recruiter can understand a client’s needs far better than a computer. Besides if a computer is searching for terms fixated on what you’ve done and not what you want to do it will screen you out every time. What a wasted opportunity!

Human nature is uncanny. Risk taking is inevitable but instead of most people becoming  victims of change only a mere few will end up being agents of it and there will be no second guessing who dares wins! So instead of screening for the textbook definition of identity based diversity how about focus on diversity of thought!