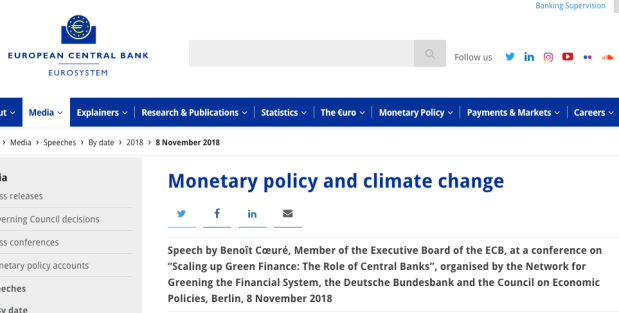 As Sweden’s economy slows to the worst economic growth rate in 5 years under a negative interest rate policy, one would think the Swedish Central Bank (Riksbank) would be seeking to prudently manage its asset book on the basis of appropriate risk/reward as opposed to lecturing Australia and Canada on their respective carbon footprints. What we are witnessing is yet another discrete move by authorities to manipulate markets based on fantasy rather than fact.  The hypocrisy is extreme as we shall discover.

While the Riksbank should have complete freedom in how it wishes to deploy capital, we should view this is a pathetic sop to the cabal at the European Central Bank (ECB). Since when did central bankers become experts on climate change? The RBA is no better. Deputy Governor, Guy Debelle, gave a speech in March 2019 on the risks posed by climate change which based prophecies on the data accident-prone IPCC and Bureau of Meteorology. Why not seek balance? Easier to fold to group think so as not to be outed as a pariah. Utterly gutless. Our own APRA is also pushing this ridiculous agenda on climate change reporting. It is willful negligence.

While it is true that on a per capita basis, Australia and Canada’s emissions are higher than the global average, why doesn’t the Riksbank give us credit for lowering that amount 11.4% since 2000? Even Canada has reduced its carbon emissions by 7.3% over the last 18 years. Admittedly Sweden’s emissions per capita have fallen 21.9% according to the IEA. Greta will be happy.

Why hasn’t the Riksbank taken China or India to task for their 169.9% or 94.7% growth in CO2 emissions respectively? There are plenty of oil-producing nations – Qatar, UAE, Bahrain, Saudi Arabia and Oman that have worse per capita outcomes than Australia or Canada. Do these countries get special dispensation from the wrath of the Riksbank? Clearly.

The US has pulled out of the Paris Climate Accord. If the US has marginally lower emissions per capita (15.74t/CO2-e) than Australia (16.45t/CO2-e), isn’t a double standard to write,

Essentially Riksbank commitment to climate change is conditional. The US which is responsible for 13.8% of global emissions can be 75% of holdings. Australia at 1.3% can’t. No doubt sacrificing Queensland Treasury Corp, WA Treasury Corp and Albertan bonds from a Riksbank balance sheet perspective will have little impact on the total. In short, it looks to be pure tokenism. The Riksbank has invested around 8% of its foreign exchange reserves in Australian and Canadian central and federal government bonds. So perhaps at the moment, it is nothing but substitution from state to federal. Why not punish NSW TCorp for being part of a state that has 85%+ coal-fired power generation?

At the very least the Riksbank admits its own hypocrisy.

“The Riksbank needs to develop its work on how to take climate change into consideration in asset management. For instance, we need a broader and deeper analysis of the issuers’ climate footprint. At the same time, one must remember that the foreign exchange reserves are unavoidably dominated by US and German government bonds. The Riksbank’s contribution to a better development of the climate will, therefore, remain small. This is entirely natural. The important decisions on how climate change should be counteracted in Sweden are political and should be taken by the government and the Riksdag (parliament).”

Still, what hope have we got when Benoît Cœuré, member of the Executive Board of the ECB, lecturing those on “Scaling up Green Finance: The Role of Central Banks.” He noted,

“2018 has seen one of the hottest summers in Europe since weather records began. Increasing weather extremes, rising sea levels and the Arctic melting are now clearly visible consequences of human-induced warming. Climate change is not a theory. It is a fact.”

Reading more of this report only confirms the commitment of the ECB to follow the UN’s lead and deliberately look to misallocate capital based on unfounded claims of falling crop yields and rising prices (the opposite is occurring) and rising hurricane and drought activity (claims that even the IPCC has admitted there is little or no evidence by climate change). Sweden is merely being a well-behaved schoolboy.

Cœuré made the explicit claim, “The ECB, together with other national central banks of the Eurosystem, is actively supporting the European Commission’s sustainable finance agenda.”

CM thinks the biggest problem with this “agenda” is that it risks even further misallocation of capital within global markets already drowning in poorly directed investment. It isn’t hard to see what is going on here. It is nothing short of deliberate market manipulation by trying to increase the cost of funding to conventional energy using farcical concocted “climate risks” to regulate them out of existence.

Cœuré made this clear in his speech,

“once markets and credit risk agencies price climate risks properly, the amount of collateralised borrowing counterparties can obtain from the ECB will be adjusted accordingly.”

What do you know? On cue, Seeking Alpha notes,

“Cutting €2bn of yearly investments, the European Union will stop funding oil, natural gas and coal projects at the end of 2021 as it aims to become the first climate-neutral continent.”

All CM will say is best of luck with this decision. Just watch how this kneeling at the altar of the pagan god of climate change will completely ruin the EU economy. The long term ramifications are already being felt. The EU can’t escape the fact that 118mn of its citizens (up from 78m in 2007) are below the poverty line. That is 22% of the population. So why then does Cœuré mention, in spite of such alarming poverty, that taking actions (that will likely increase unemployment) will be helped by “migration [which] has contributed to dampening wage growth…in recent years, thereby further complicating our efforts to bring inflation back to levels closer to 2%.”

Closer to home, the National Australia Bank (NAB) has joined in the groupthink by looking to phase out lending to thermal coal companies by 2035. The $760 million exposure will be cut in half by 2028. If climate change is such a huge issue why not look to end it ASAP? This is terrible governance.

Why not assess thermal coal companies on the merits of the industry’s future rather than have the acting-CEO Philip Chronican make a limp-wristed excuse that it is merely getting in line with the government commitment to Paris? If lending to thermal coal is good for shareholders in 2036, who cares what our emissions targets are (which continue to fall per capita)? Maybe this is industry and regulator working hand-in-hand?

The market has always been the best weighing mechanism for risk. Unfortunately, for the last two decades, global central bank policy has gone out of its way to prevent the market from clearing. Now it seems that the authorities are taking actions that look like collusion to bully the ratings agencies into marking down legitimate businesses that are being punished for heresy.

This will ironically only make them even better investments down the track when reality dawns, just as CM pointed out with anti-ESG stocks. Just expect the entry points to these stocks to be exceedingly cheap. Buy what the market hates. It looks as though the bureaucrats are set to make fossil fuel companies penny stocks.