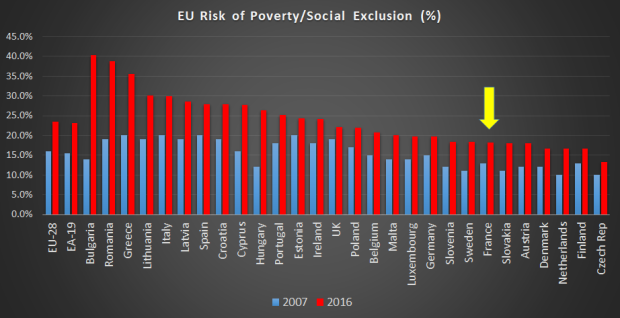 Why are we surprised at the yellow vest uprising across France? Poverty/risk of social exclusion across Europe has continued to spiral upwards since the Global Financial Crisis (GFC). There were 78mn living below the poverty line in 2007. At last count, Eurostat notes that number was 118mn  (23.5% of the European population). In the Europe 2020 strategy, the plan is to reduce that by 20 million.  37.5mn (7.5%) are living in severe material deprivation (SMD) , up from 32mn in 2007.

The SMD rate represents the proportion of people who cannot afford at least four of the nine following items:

The French are merely venting what is happening across the EU. The EU could argue that at 18% poverty, the French should be happy compared to other nation states. Europeans aren’t racist to want a halt to mass economic migration when they are the ones financially struggling as it is. Making economic or compassionate arguments aren’t resonating as they feel the problems first hand.

Is it a surprise that the UK, at 22.2% poverty, wanted out of the EU project to take back sovereign control? Project Fear might be forecasting Armageddon for a No Deal Brexit but being inside the EU has hardly helped lift Brits from under a rock. Why would anyone wish to push for a worse deal that turns the UK into a colony?

Why is anyone surprised that there has been a sustainable shift toward populist political parties across Europe? Austria, Italy, The Netherlands, Poland, Hungary, Sweden, Germany…the list goes on. Even France should not forget that Front National’s Marine LePen got 35% of the vote, twice the level ever achieved. Is is a shock to see her polling above Macron?

The success and growth of EU-skeptic parties across Europe will only get bigger. The mob is unhappy. Macron may have won on a wave of euphoria as a fresh face but he has failed to deliver. He may have suspended the fuel tax hikes, but the people are still on the street in greater numbers. He has merely stirred the hornet’s nest. Perhaps UK PM Theresa May should take a look at the table above and realise that her deal will only cause the UK to rise up. At the moment sanity prevails, and when it comes in the shape of Jeremy Corbyn that is perhaps a sign in itself.