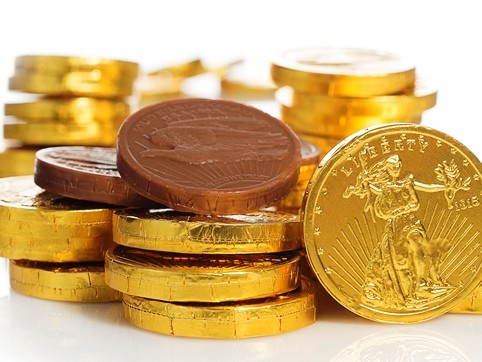 What is it with Elon Musk that keeps making up such fictitious dreams about the future? So even assuming his $2bn capital raise all goes smoothly, his dream of up to 1,000,000 robo-taxis, Tesla cars doubling in value and a market cap of $500bn is just barking mad. It reminds CM of a time when a mobile phone retailer in Japan, Hikari Tsushin, had Y100 trillion (c.US$1 trillion) market cap gold coin chocolates produced as a hubristic internal target in 2000. 19 years later the shares are only 9% of the peak price reached and 1% of the value of the prophecy embossed on the chocolate. It is up to the market to decide how much a company is worth, not the CEO. A CEO obsessed with the share price is always a dangerous game.

According to CNBC Musk said at his Autonomy Day,

“that autonomous driving will transform Tesla into a company with a $500 billion market cap, these people said. Its current market cap stands around $42 billion. He also said that existing Teslas will increase in value as self-driving capabilities are added via software, and will be worth up to $250,000 within three years.

Musk reiterated that because Teslas can be upgraded “over-the-air” with new software-enabled features and functionality, they will appreciate in value, unlike nearly every other car on the market. A Tesla will be worth $150,000 to $250,000 in 3 years, he claimed. He also said that a full self-driving upgrade will increase the value of any Tesla by a half order of magnitude, or five times.

Tesla expects to have 1 million vehicles on the road next year that are able to function as “robo-taxis,” Musk said, reiterating statements made at Autonomy Day and on the company’s Q1 earnings call. Each car should be able to do 100 hours of work a week for its owner, making money as a robo-taxi he told investors.“

So if Musk’s cars would be worth $150,000-$250,000 how does that reconcile with a sticker price of $35,000~$124,000? A used 2018 Model S 100D with 18,588 miles on the clock is $60,990. So the above used car could technically be worth c.2.5x higher in Musk’s thought bubble. Where is the stampede of people running to used car lots to hoard compatible Teslas? That has to be one of the best investments out there – forget buying Tesla shares! Buy the used cars. Sadly, about the only cars that appreciate are limited edition classic cars. A mass-market electric car in abundant supply will not be worth a 100% mark-up, even if one takes into account the hypothesis is driven by the revenue uplift of one’s car doing the rounds of a taxi while you sleep.

If Musk truly believes his robo-dream, he should move to immediately raise the price of his cars to the price range he thinks his cars will be worth. Why not bring back residual value guarantees (RVG)? That’s right, he had to take a $121m write-down on existing RVGs this quarter just gone. Guess how many of his current line up he will sell at $150,000-250,000? Zero. That shows us the true value of Tesla. Appreciating Teslas and $500bn market caps. Some of the best comedy going. So is $240/share.

CM has been critical of the company’s mid term business plan. It is preposterously over optimistic. How has CEO Matt Levatich managed to hold on over the past 4 years? Since taking the helm, volumes have fallen from 268,000. Revenues have shrunk from $6bn to $5.7bn and EBIT of $1.2bn to $733mn.

Harley continues to suffer from the divine franchise. It isn’t about introducing 100 new high impact motorcycle models. It needs to revamp what it has. It needs to go back to is roots. Not use the metrics of an expensive consultant to paint rosy pictures that are unattainable.

Harley bought a kid’s electric scooter company. It should be looking to M&A to diversify the portfolio of motorcycle brands and segments. Harley building an adventure bike is not going to cut it. They need to buy Ducati, something CM has encouraged for ages.

Harley-Davidson (HOG), perhaps the most iconic form of discretionary spending, came out with a howler set of Q4 numbers.  Revenue down 9% and operating losses in the last period. FY operating income fell 30% on revenues that finished 1% up. Domestic sales for the 2018 year fell 10% while international sales were flat. Worse was guidance pointed to unit sales falling between 217,000 & 222,000 units down from 228,000 in the fiscal year just past. This new range of unit targets would mean a decline for five consecutive years. If this pattern continues into 2020, luxury competitor BMW, which targets 200,000 units, will likely even up the tally, despite being less than half HOG was in FY2012.

In June 2018, CM wrote, ““Harley-Davidson (HOG) is the classic case of a divine franchise. While still the world’s largest maker of cruiser motorcycles, it is being swamped by new competition. HOG’s EBIT performance has slid for the last 4 years and is even below the level of 2012…Sadly for HOG, 1Q 2018 has revealed even worse numbers. Global unit sales were 7.2% down on the previous year and 12% down at home.  Japan and Australia were soft. Looking at the strategy it looks like throwing spaghetti at a wall and hoping it sticks.”

Harley may have a grand master plan to incubate 2,000,000 new riders and launch 100 new bikes out to 2027, but all the while they remain stuck in a design studio, the competition, including the Japanese, keep stealing sales away from the Milwaukee icon.

The strategy looks completely unrealistic because growing 200,000 new bikers a year for a decade in the domestic market would mean that based on 2019 global unit sales projections,  92% of customers would need to be brand new, not repeat or existing. However the plan is to grow in the US where it had 138,000 sales in 2018 that would mean new customers would need to be 145% of all current sales in the US. No auto maker on the planet has ever had such pie in the sky assumptions for cultivating new customers, much less at that pace for 10 straight years. How can the board of HOG honestly think this is even remotely achievable? Sadly the company has been too eager conducting buybacks to flatter EPS. Net income for HOG was +1.8% for FY2018, diluted EPS was +5.6%. Time to stop playing games and properly delivering for shareholders.

It hadn’t really hit until going back to read the conditions of Musk’s new executive compensation package but the first thing that struck me was the risk of the old adage of paying too much attention to the share price. The collection of all 12 tranches for CEO Elon Musk only kicks in when his company hits $650bn in market cap. The first thing to pop in the head was that of Japanese mobile phone retailer Hikari Tsushin back during the tech bubble. The rather eccentric CEO Yasumitsu Shigeta had gold coin chocolates made embossed with “Hikari Tsushin: Target Market Cap Y100 trillion.” One could only conclude he believed in his own BS.

It was at that moment where the only thing that crossed the mind was ‘this spells trouble’. There were magazines like Forbes touting how Shigeta was one of the richest men in the world and analysts fell hook, line and sinker for this unrealistic dream forecasting he’d be #1 before long. The only rational conclusion for the Contrarian Marketplace was to tell them that “bet he won’t be in the top 100 next year.”  Low and behold the tech bubble collapsed and Hikari Tsushin – that believed it was worth 2x the market cap of then highest valued corporation in the world, General Electric – fell over 95%.

While Musk may not yet have printed target market cap $650bn gold coin chocolates, what the incentives are saying to the market is that his company needs to be worth more than Daimler, BMW, VW, GM, Ford, Toyota, Nissan, Honda, Renault, Fiat-Chrysler Ferrari and Porsche combined. Just read that last sentence again. Do investors honestly believe that Tesla which consistently misses and is going up against companies that have been in the game for decades, seen brutal cycles, invest multiples more in technology and forgotten more than they remembered will somehow all become slaves to a company which has no technological advantages whatsoever?

Once again, this compensation package screams of gold coin chocolates in mentality. Instead of running the business and letting the share price do the talking, the mindset is focused on launching convertibles into space and distracting investors from increasingly dreadful financial results which eventually must come full circle if the results continue to miss. Broader Tesla report here.