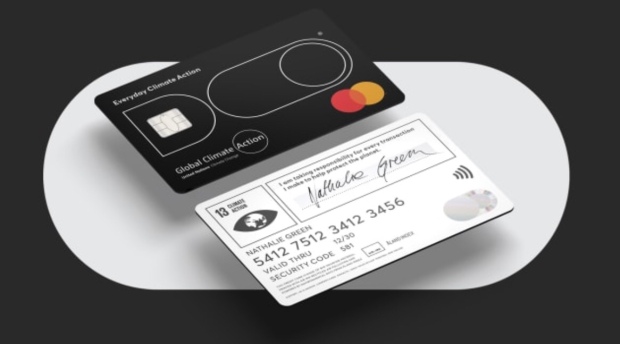 Here is a credit card business model bound to fail. Johan Pihl, one of the founders of Doconomy, is launching a new credit card in collaboration with the UN Climate Change Secretariat and Mastercard. It cuts your ability to spend when you’ve hit your “carbon” limit, not your financial one. Now we will be able to stop our rampant plastic use with, you guessed it, plastic!  Although Doconomy claims the card will be made from bio-sourced material. Sadly the silicon chip will require high energy intensity to make. At least air pollution is good for something as it will be the main source of the ink.

Pihl said, “we realized that putting a limit that blocks your ability to complete the transaction is radical…but it’s the clearest way to illustrate the severity of the situation we’re in...Imagine if the consumer would pick up our app and actually look at their footprint and that’s the basis for whether they buy something or not,”

Perhaps we should ask all UN staffers to use it as their business credit card. If Doconomy lived up to its promises, most would have their carbon limit triggered when paying for flights to the next COP summit halfway around the globe. That would be a plus!

It uses the Åland Index to identify the CO2 of every transaction. CM encourages everyone to have a play with the carbon calculator.

For instance, if one spends 100 euro in a supermarket, the carbon footprint is almost the same as spending 100 euro in a department store. So regardless of whether one buys 100 euro of fruit or 100 euro of plastic-packaged flash-fried instant noodles, the impact of 4,902g of CO2 footprint is the same. Buy a 100 euro bottle of perfume or 100 euro of cuff links at a department store, the impact is still 4,293g. What you probably didn’t know is that smoking has a lower carbon footprint than buying groceries on a euro for euro basis. If smokers ever wanted an excuse to repeal these oppressively high taxes on tobacco, surely we should be getting Extinction Rebellion to add it to the list of demands because of the lower carbon footprint that can be achieved.

Whatever you do, don’t buy your loved one flowers! 100 euros of flowers has a 4,696g impact. That 200 euro Valentine’s dinner will add 15,928g. However, will the app calculate the 200 euro bottle of wine to celebrate an anniversary at 2x the 100 euro bottle? Yes it will.

If you do online gambling, 100 euro will cost 38,066g. You guessed it, if you spent 1,000 euro (exactly the same transaction time and keystrokes) it will cost 380,660g. Just shows how woefully inaccurate these carbon calculators are. To save the planet, instead of fuelling a gambling addiction,  you can cut your impact on the social fabric of society and save 90% by filling your car (118,600g of CO2) with 100 euro of fuel and enjoy a spiritual country drive to avoid regular attendance at Gamblers Anonymous.

Hotels – same thing. 100 euro on a hotel has 1/4 the emissions of a 400 euro hotel. Presumably if one is a master of Trivago or Hotels Combined website one can cut the emissions on exactly the same hotel room by the level of the discount. Who knew being environmental was so simple?

“With DO, you get actual refunds from connected DO stores, based on the carbon impact of your purchase. We call it DO credits…The refunds can be used to compensate for the carbon footprint of your purchase. You can direct it to UN-certified carbon offset projects, or invest in sustainable funds. If you choose to invest in a fund, you must add the same amount as the value of your DO credit. You choose.”

Damn. How much will one have to spend to get enough DO credits to make an impact on a sustainable investment fund?

What a joke. As soon as the UN is involved in any such project we can absolutely guarantee the outcome will be a farce.

Here is a credit card business model bound to fail. Johan Pihl, one of the founders of Doconomy, is launching a new credit card in collaboration with the UN Climate Change Secretariat and Mastercard. It cuts your ability to spend when you’ve hit your “carbon” limit, not your financial one.

To CM, the pricing is wrong. It should allow one to spend beyond their carbon limit and pay penalties on exceeding it straight into the UNIPCC’s coffers. Or perhaps we should ask all UN staffers to use it as a corporate credit card. If it lived up to its promises, most would have their carbon limit triggered when paying for flights to the next COP summit halfway around the globe. That would be a plus!

Pihl said, “we realized that putting a limit that blocks your ability to complete the transaction is radical…but it’s the clearest way to illustrate the severity of the situation we’re in”

It is such a dopey idea. Presumably, if you wish to purchase something that you want and your Doconomy cuts you off, you’ll use another card to complete the transaction. The carbon footprint limit will initially be based off a random calculation tied to the industry aggregate. So it is wildly inaccurate from the get go.

“Imagine if the consumer would pick up our app and actually look at their footprint and that’s the basis for whether they buy something or not,”

If history is a guide we can look to carbon offset schemes have failed. Aircraft carbon offsets may provide some idea as to how hard this card might be to sell.

In its 2017 Annual Report, Qantas boasts,

“We have the world’s largest airline offset program and have now been carbon offsetting for over 10 years. In 2016/17, we reached three million tonnes offset.”

Carbon calculators tend to work on the assumption of 0.158kg CO2/passenger kilometre.

In the last 10 years Qantas has flown around 1 trillion revenue passenger kilometres. While the literature in the annual report denotes one passenger offsets every 53 seconds, the mathematical reality is simple – 2% of miles are carbon offset. So that means that 98% of people couldn’t care less.

Another example was a cryptocurrency named LivingOffset, which tried to conduct an initial coin offering (ICO) 12 months ago.

LivingOffset notes on its web page,

“Let’s say you buy a cup of coffee. You know that producing the coffee has created carbon emissions.  Now, you can offset that damage with a contribution that matches the value of the carbon cost, 5c for a cup of coffee…Your 5c contribution is matched with an equal corporate contribution.  Turning your 5c offset into 10c. Just think, if everyone having coffee did the same… how quickly we could start to make a real difference…All the contributions go to projects that have proven to have a positive impact on the environment by reducing carbon emissions. And, you can track and verify that your money is going exactly where it is meant to go.”

To the best of CM’s knowledge, the ICO didn’t succeed and is currently priced at $0. That despite its lofty goals of 128% returns. Perhaps using Wikipedia as a source in the prospectus did not help matters.

CM is not sure about his readers, but to have the card reject a payment based on spurious mathematics would undoubtedly frustrate after a while.

Probably says much about MasterCard to sign up for this virtue signalling rubbish given it is lagging behind Visa. If they looked at Gillette, Colgate-Palmolive and other “woke” corporations, they would learn the value of sticking to their lane and allowing consumers to have the freedom to spend how they choose.