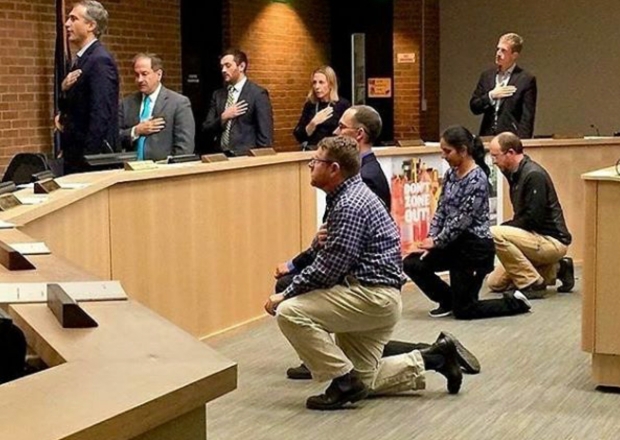 Well the dilution goes on. Seems knees can be taken anywhere now. Four councilors from the Michigan city of Ann Arbor, home to the University of Michigan, decided to take a knee during the national anthem ahead of session. Of course we can argue they are exercising free speech but what would the Ann Arbor Police Department think of councilors taking a knee to protest police violence? Given these people are in a position to influence policy why don’t they head down to the AAPD and work “with” them on solutions to raise awareness on how to deal with the problem, should it exist on as grand a scale as made out? No, just take a knee and do nothing. Wimpy virtue signaling liberals who think appearing to do good is just as good as actually doing the real thing

Of course it is not to say that excessive use of force isn’t an issue. It is to say that many good policemen and women put their lives on their line to protect the people. Some people resist arrest when compliance would see far fewer shows of force. If you aren’t breaking any laws, why would you resist? However there are too many occasions where people that have resisted arrest have threatened officers with acts of force. It doesn’t justify excessive force. In fact if cops were wanting to hide their bad behaviour they wouldn’t be signing up to body-cams to provide proof!

Back to Ann Arbor. The city of 360,000 has an income above the mean, a 3% unemployment rate, jobs growth of 2%, cost of living 1.6% below the national average and a median house price of $225k. It is hardly a town that has a rampant crime rate with cowboy cops slamming its residents.

Burglary and motor vehicle theft are at rates at half the national average. Murder 1/5th. Robbery less than half. Assault in line. Rape, marginally above. So on balance hardly a crime infested swamp overrun with blood thirsty police officers. Yet councilors with no evidence of trigger happy sherriffs take a knee?

So perhaps these councilors  could point to the wonderful work of the AAPD and use them as a beacon of successful policing rather than take a knee for problems they could help solve by coordination with other police forces with a bad reputation. No, taking a knee is enough. Case closed.