Just like clockwork, Democrats, like NY Gov Andrew Cuomo, have finally seen the light that the cost of lockdowns is too high. That the cure is way more costly than virus.

Now that Biden is assured to take his seat in the Oval Office, let’s see how quickly corona leaves the front pages of the mainstream media as deaths plummet (probably by virtue of a tweak in the manner of recording by the CDC). His administration will get a big fat tick of approval and don’t be surprised to see a plethora of puff pieces which show the rebound in economic activity among Democrat-controlled states thanks to President Biden’s superior stewardship. Who knew!?

Perhaps Cuomo chips will be a thing of the past and he will finally be able to lure all those rich folk that make up 50% of the tax base back from Connecticut. Best he start working on his culinary skills and making sure he buys the well heeled those drinks he promised to buy with the taxes they previously paid.

Maybe Cuomo should seek to get Hollywood actors to chip in? After all they bent over backwards to make public videos to celebrate his cringeworthy Emmy award.

However will the United Van Lines survey which showed most people left Democrat-controlled states in 2020 to Republican-controlled ones.

Ron DeSantis is disgusting just like his mentor Trump….here he is berating @RosaFlores a female reporter for trying to ask a legitimate question about his terrible vaccine distribution plan in Florida….glad she stood her ground #DeathSantis pic.twitter.com/JABzvGKzS8

So refreshing to see Florida Gov Ron DeSantis push back on CNN. The network doesn’t appear to have any real journalists. Only activists.

It is fun to see DeSantis call out the network for not investigating its own intended “gotcha” question. Funny how some on Twitter turned his take down – based on the victim’s lack of preparation – as a misogynistic attack.

We were continuously told last year that we must follow the science on COVID-19. No ifs. No buts. We’re all in this together. Right?

Not so fast. Politicians continued to collect paychecks while forcing so many into financial destitution by preventing their right to earn an income. Even worse the political class continuously broke their own draconian rules which landed many of the less fortunate with fines, arrests and in the worst case scenario, prison. Rules for thee but not for me.

Back to the science.

One could be forgiven for possessing a healthy dose of skepticism in questioning the medical advisories by virtue of the constant flip-flopping on how to contain the virus.

Sweden has proven that lockdowns aren’t effective. That didn’t stop a me too approach exercised by most cities/states/countries to adopt economics-destroying stay-at-home orders. It wasn’t based on a science but a safety in numbers approach. The idea that there was less political risk by following a herd mentality rather than herd immunity.

Flu guru Dr Fauci told us masks were ineffective until they became a useful political tool for him to promote their use.

Now a multitude of vaccines are upon us, science doesn’t seem to be the only driver of decisions on how it should be administered.

Were the science to be followed to the letter, wouldn’t the best option be to save lives in aggregate? Wouldn’t that be to give it to the most vulnerable members in society first i.e. the elderly?

Well the CDC has modelers like Jo Walker. Walker identifies as a non-binary trans who goes by pronouns they/them. Walker’s Twitter handle makes a pretty strong case for putting social justice ahead of science. Walker is a fervent supporter of defunding the police and claims to live on stolen land. By that measure, it is not hard to believe that such public disclosure might reveal a certain personal bias.

We don’t know about you but all we look for in data scientists (or any other profession for that matter) is the ability to do the role competently.

Are modelers like Walker partly responsible for pushing the racial inequity narrative at the CDC? In a nutshell, given there are more whites in the 65yo and above category (who just happen to be among the highest risk of succumbing to COVID-19), the CDC believes there is a strong case for minorities being bumped up the queue even if it could result in a higher final death tally.

Put it another way, if minorities dominated the most risky categories (65+) the CDC would have no need to report it because it would merely be the right thing to do.

Expect 2021 to reveal more mind numbing social justice masked as science. So much for uniting people by promoting real equality. Use identity as the yardstick. The more oppression points the better. End segregation by enforcing it.

Then some wonder why fewer and fewer people are in this together. The CDC and many groups like it have ceased being reputable agencies and become activists pushing agendas unrelated to their mandated fields.

While vigilance is a necessary evil, we found today’s explanation of COVID restrictions somewhat similar to the schoolboy scene in Monty Python’s ‘Meaning of Life‘

140,000 tests since the latest cluster was discovered in NSW and only 90 cases. That means that 99.94% of tests have been negative. No ICU hospitalizations. No deaths. Yet all of a sudden people are masking up as if everything is totally different than recent months where cafes and restaurants have thrived (and still do) again.

We are curious to learn that compassion trumps science. People can celebrate Christmas within lockdown areas in limited numbers but can’t have visitors after Dec 27. Surely, if the #1 goal is to thwart the pandemic, then those two days pose a bigger risk than relenting for the spirit of the festive season. We think the reality is that the risks just aren’t as big as made out.

Let’s not get distracted by the fact that we’ve had near as makes no difference crowded stadiums at sporting events without mass infections resulting from them. Where are the public health officials reporting on the impact (or lack thereof) surrounding these events? Crickets.

Consistency in policy prescription makes for better compliance. NSW has done an excellent job in contact tracing. No question. Although that hasn’t stopped VIC Premier Dan Andrews lecturing NSW on managing the virus even though it graduated to QR codes 6 months after NSW and is still responsible for 90% of all deaths in Australia from COVID.

Despite all the fear mongering in the world, we only need to look at recent experience to know that we don’t need hard lockdowns to prevent a virus that has a 99.99% recovery rate.

There are very, very few instances of known allergic reactions to the Covid-19 vaccine, but Marco Rubio has always thought of himself as one in a million so there’s still hope.

Ahh, the tolerant left. You know, the same people who have promised to restore unity, healing and empathy back to America. Check this out for the type of compassion coming.

Many on the left have been aghast at the idea that Republican Senator Marco Rubio has “cut in line” to get the COVID-19 vaccine when he, in their minds, was not a priority. Former Star Trek actor George Takei even wished that Rubio get horrible side effects as punishment, even though all members of Congress are eligible on federal government continuity grounds to receive it.

For all of the left’s demands that cultist Republicans, who polls show are 4x less likely to get vaccinated, step up and try to show support for the shot, they get attacked.

However if a Democrat was inoculated the left would be celebrating their steadfast commitment to encouraging others that it is safe. Elizabeth Warren and Ed Markey had few issues publicly displaying they took the vaccine.

Senator Warren said, “At the advice of the Office of the Attending Physician for the continuity of government, I received the first of two shots of the COVID-19 vaccine on Saturday…The vaccine is safe, effective, and will save lives.”

Of course, much of the feedback to her tweet was praised for exactly that.

Because I just bashed Rubio on posting a similar picture, so had to think about why you're different. Because you're an actual leader.

“Going to give you a pass on getting it early, since I think there are genuinely people who will follow your example. Still wish we had more for the medical workers, though…”

Because I just bashed Rubio on posting a similar picture, so had to think about why you’re different. Because you’re an actual leader.”

As ever with the left, it is not the principle that matters but the side.

We must ALL come together as one big global family to beat COVID-19. I am proud to lend my voice (and my dance moves!) to the #WeAreFamily campaign with Kim Sledge, @The_WorldWeWant @thewhof in benefit of @WHO.

To learn more or sing with us, visit https://t.co/N4e6VDIR9I. pic.twitter.com/PKDbp3rFvZ

Aren’t these the people telling the rest of us to behave like adults and that staying at home is for our own good?

Sure, a dance will soften the blow of NYC businesses and staff crushed financially under the weight of often baseless unscientific draconian rules. Not. Maybe when one collects a public sector paycheck regardless of stage of lockdown, one can gladly glide down the stairs without a care in the world.

I apologize for my decision to gather for Thanksgiving with my family, contrary to the rules. I understand my obligation as a public official to provide exemplary compliance w/ public health orders, & not to ignore them. I commit to do better. My statement: pic.twitter.com/LFhX2LCUf3

Yes, hypocrisy knows no bounds when it comes to elitist politicians.

Much like CA Gov Newsom, Liccardo said, “I apologize for my decision to gather for Thanksgiving with my family, contrary to the rules. I understand my obligation as a public official to provide exemplary compliance w/ public health orders, & not to ignore them. I commit to do better.”

Unlike Californians who aren’t in the political class, Liccardo will face no repercussions.

How can these politicians warn of the imminent threat of coronavirus when they display such flagrant double standards? 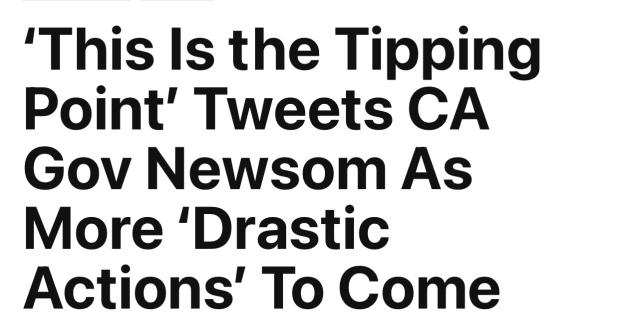 Who knew? Not much more than one week after he was caught red handed violating coronavirus restrictions dining in a fine restaurant with a dozen others including the CEO of a major medical association no less, California Gov Gavin Newsom is talking of far harsher restrictions to prevent another ‘rona outbreak issuing the threat that ICU beds could be over 100% capacity by Christmas.

Perhaps the waiters at the French Laundry know all about tipping points. Newsom knows nothing of the sort.

Why do the WaPo editors bother publishing such nonsense over a traditional family get together? What evidence does WaPo have of the world watching in disbelief? Should Americans heed the disapproval of someone living in Melbourne?

It is hard to think of a more sanctimonious article that sneers at families bonding.

Or have Americans moved on from the fear-mongering peddled by medical activists enjoying new found powers to push politics over science?

Isn’t it just more evidence of Americans growing fed up and tired of the double standards displayed by hypocritical politicians who break the very rules they portend gruesome death if the peasants don’t follow draconian orders to the letter?

Maybe when people see elites like California Gov Gavin Newsom busted for having a swank dinner with the CEO of the California Medical Association – who represents thousands of physicians – people can see that they are being played.

It perfectly sums up the satirical video we published today about “obedience.”

Not far off the Mark when it comes to COVID lockdown rules.