In the midst of the embarrassing backlash, can Coca-Cola honestly say that this internal (racist) training has given the company an edge in achieving diversity and inclusion?

As we wrote last week, the fact that the company saw a need to go down this woke route speaks volumes about ignoring the decades of policies it has already put into action to achieve workplace harmony.

Coca-Cola management should take a long hard look in the mirror and admit that hiring activists to conduct such training actually harms the very thing it is trying to achieve – through exclusion.

Why do corporates fear activist minorities? Companies should evaluate their own successes based on low staff turnover – a function of workplace conditions, profitability – a sign of a productive workforce and relative competitiveness to peers – a product of a driven team.

In no uncertain terms, forcing indoctrination on particular staff can only cause a drop in their morale and encourage the best performers to leave.

It is in the best interests of any company to promote the best people, regardless of age, race, gender or what they choose to do behind closed doors. If ALL of the best performers happen to black LGBT women then promote them on their achievements rather than identities.

Coca-Cola has done the opposite. Why risk having internal training leak to the outside and polarize customers? Gillette cost shareholders $8bn in write offs due to inferring men, the majority of its clientele, were toxic.

Let customers decide their own politics. Reward staff based on performance and contribution rather than skin hue and genitalia. It’s simple.

And Coca-Cola, or any other corporate for that matter, customers never have you in mind when you publicly state that racism, sexual abuse or violence doesn’t align with your values. Who in your HR and PR departments ever thought it did??

🚨🚨🚨 BREAKING: Coca-Cola is forcing employees to complete online training telling them to "try to be less white."

These images are from an internal whistleblower: pic.twitter.com/gRi4N20esZ

Why not give the majority of all employees the benefit of the doubt that they are fair minded individuals who respect their colleagues in the workplace regardless of identity. Aren’t 360 degree reviews supposed to nut out trouble makers or underperformers, whatever background they may come from? Isn’t that the best outcome for all?

Good companies should always be seeking to work toxic employees off their platform should the pernicious behaviours create negative outcomes for other staff members, suppliers or clients.

Good managers pay close attention to staff behaviour in the workplace. In our own careers we all know of people in our companies that positively create energy and those who drain it. Bad employees are just that, regardless of identity.

The more important question is whether decent, hard working minorities who back their ability, demanded Coca-Cola conduct the training? Have they gone out of their way to make claims of racism to HR about their white colleagues acting too white? Most likely not. This is another one-size-fits-all program which makes out that groups are monoliths.

Interestingly, Coca-Cola has made much fanfare of its long history of diversity and inclusion, going back to 1934 with the appointment of the first female board member, Lettie Pate Evans.

“We work to maintain workplaces that are free from discrimination or harassment on the basis of race, sex, color, national or social origin, ethnicity, religion, age, disability, sexual orientation, gender identification or expression, political opinion or any other status protected by applicable law. The basis for recruitment, hiring, placement, development, training, compensation and advancement at the Company is qualifications, performance, skills and experience…”

So if the very policy is to respect ‘all’, why single out one group to be less white? What is next? Men required to be less toxic? Tall people to walk on their knees?

Coca-Cola has a plan to make women 50% of the managerial class in the company. Shareholders would gladly welcome 100% female managers should they be best suited to the roles were it based on “qualifications, performance, skills and experience…”

As it should be.

What a slap in the face to all those deserving employees – who can make it on meritocracy alone – effectively be told by the company that unless whites are forced to behave less white that path for success will be harder. Basically, the suggestion is that they need a leg up.

Surely if Coca-Cola had executed 130 years of self-proclaimed continuous diversity and inclusion in the workplace ethos it wouldn’t need to introduce such training. Period. The company should evaluate the systemic failures within HR, not the employees.

The tale of a typical liberal politician. City of San Francisco Mayor London Breed, a Democrat,  said she will no longer conduct business with 22 states that have laws limiting the ability of women to obtain abortions, specifically late-term. At present Alabama, Arkansas, Florida, Georgia, Indiana, Iowa, Kansas, Kentucky, Louisiana, Massachusetts, Mississippi, Nebraska, Nevada, North Dakota, Ohio, Oklahoma, Pennsylvania, South Carolina, South Dakota, Texas, West Virginia, and Wisconsin have pro-life laws in place. City of SF employees will be prohibited from conducting business travel to states on the list, and from making any deals with companies headquartered in those states.

The City of SF’s Director of the Department of the Status of Women, Dr. Emily Murase said,

“In recent years, states across the country have passed a growing number of restrictive abortion laws. In accordance with Supervisor Brown’s ordinance, we identified state laws that prohibit abortion before viability and have recommended that these states be added to the City Administrator’s list…If any company that is headquartered in the listed states wants to continue doing business with the City, we encourage them to stand up for reproductive rights and advocate for a change to their state law. We applaud Supervisor Brown for her leadership in authoring this ordinance and for continuing San Francisco’s long history of fighting for women’s rights.”

As regular readers would know, CM detests corporates getting actively involved in politics that are completely removed from the products they sell. Corporations are completely free to go down the path of whatever marketing path they desire. However, CM doesn’t need lectures from Nike, Gillette or Starbucks on their views completely unrelated to fitness, shaving or bitter burnt coffee. CM would prefer these corporations to leave it to customers to make choices solely based on the combination of utility, quality and price of the products they sell. CM is also against boycotting of any kind. Let individuals make these choices.

Unfortunately, too many corporations are folding to this type of virtue signalling. Corporations cannot guarantee that they have 100% support for unrelated political positions among staff, so why push agendas that have little or no relevance to the performance of the business for the sake of public preening? When scandal-clad banks make overt gestures of their moral superiority on matters outside of their remit, CM reaches for a bucket. On what grounds do banks have to lecture we peons on anything? Hypocrites.

Sadly for Breed, Coca-Cola, WalMart, AT&T, Aetna, Pfizer & Eli Lilly have donated to politicians who have advocated for abortion bans in some of those 22 states. Corporate donations to politicians that may support abortion bans don’t necessarily automatically convert to company policy on the same topic. Will City of San Francisco employees caught drinking Diet Coke be hauled into a room and read the riot act? Will an internal lunchtime order for Domino’s Pizza with 50% off a 2-litre bottle of Sprite special demand staff seek pre-approval from the mayor’s office?

True to form, liberals such as Breed have no compunction bullying big business to toe the line, much like the NBA now buckles to the whims of President Xi. While kneeling for the US anthem or shunning President Trump is considered an act of free speech, it is now mandatory for all players to stand for the Chinese national anthem. How wonderful liberals decide to back the side, not the principle.

Regardless of one’s views on the rights and wrongs of (late-term) abortion, it is rather ridiculous for a mayor to dictate terms to public officials in other states who were voted in by constituents that happen to hold different opinions. 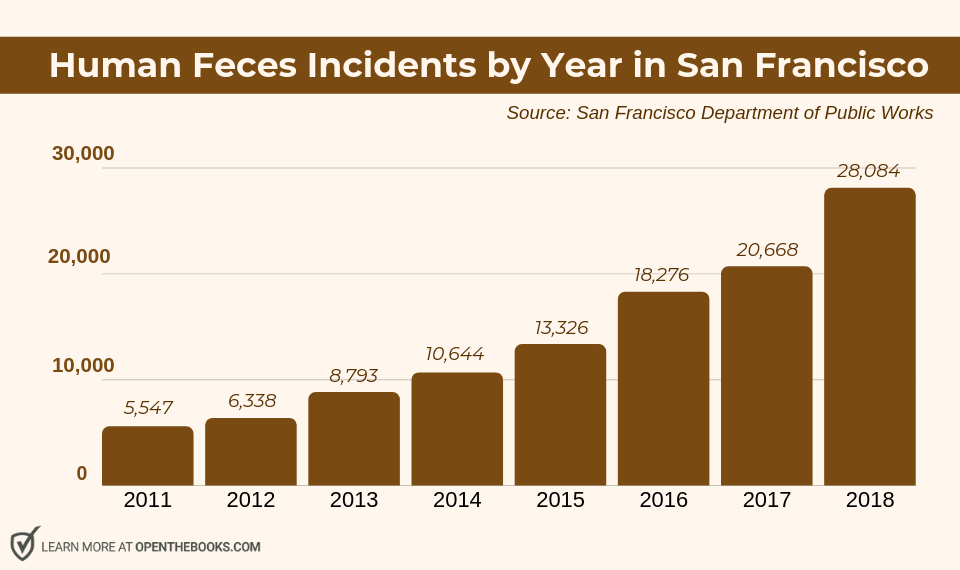 Perhaps Mayor Breed should focus on the disastrous liberal policies that have led to a surge in homelessness, drug use and public human excrement clean up squads. Although she won on a ticket of cleaning up this mess, the trends remain in force with the 1Q 2019 trend at 6,700 fecal incidents. Homeless numbers remain high.

So before Breed starts berating her neighbours for their supposed shortcomings, perhaps she should concentrate on her own backyard first. Better still, perhaps she should run for mayor in one of the cities of the 22 states mentioned and push her pro-choice platform to see how far she gets. Didn’t think so.

The ultimate irony is that these 22 states probably have less to lose than San Francisco does with this action.