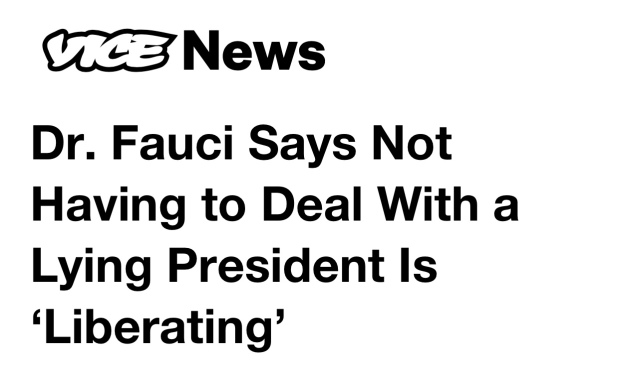 If principles were so high on Dr Fauci’s agenda, why didn’t he resign and publicly out Trump for all his wicked ways at the time he felt silenced? Was he enjoying the limelight of being in a position of power and privilege too much to do so?

“I can tell you I take no pleasure at all being in a situation of contradicting the president so it was really something that you didn’t feel that you could actually say something...”

Yet Fauci previously said of Trump,

“The president [Trump] has listened to what I have said and to what the other people on the task force have said…when I have made recommendations he has taken them. He has never countered or overridden me…”

Don’t forget that Fauci was originally against masks as a preventive and then for them when it was politically expedient to do so. So inconsistency is a hallmark.

Now that Trump has gone, is Fauci jumping on the “trash Trump at any opportunity” cancel culture bandwagon because he’s now got a new master who welcomes criticism of his predecessor and allowed him to keep his job? Sounds like it.

Was Fauci worried that Trump might win the election and resigning early would have left him with egg on his face? Or did he just hedge his bets like he has done with so much of his advice?

Vice’s article says way more about who is really telling fibs. But of course, we can’t expect any journalistic integrity from the left wing media to call him out on his conflicting remarks.