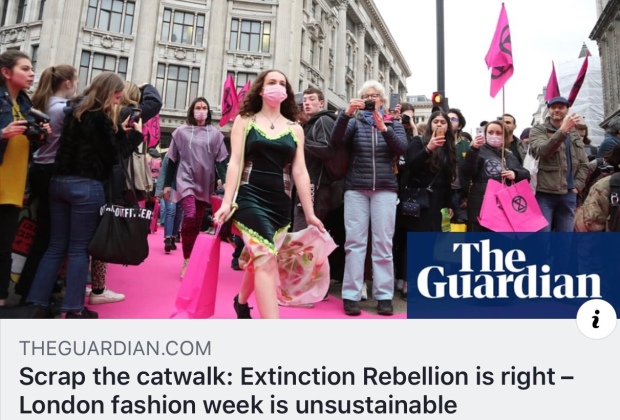 That’s it folks. Forget fashion. Ditch your Manolo Blahniks. Shred your DVF dresses. Burn your designer Armani jeans in a pyre. Even better write a placard and protest outside Gucci or Louis Vuitton. It’s for the planet you know.

Extinction Rebellion (XR) has said London fashion week is unsustainable. Ladies, prepare to wear drab grey gender neutral pant suits from now on. Men will be allowed to wear a skirt presumably so as to foster transgenderism. This will be year round. We’ll be allowed one set only.

“the environmental group Extinction Rebellion has seized the initiative, writing to the British Fashion Council (BFC), conveners of London fashion week, demanding it is scrapped in favour of “a people’s assembly of industry professionals and designers as a platform to declare a climate and ecological emergency” 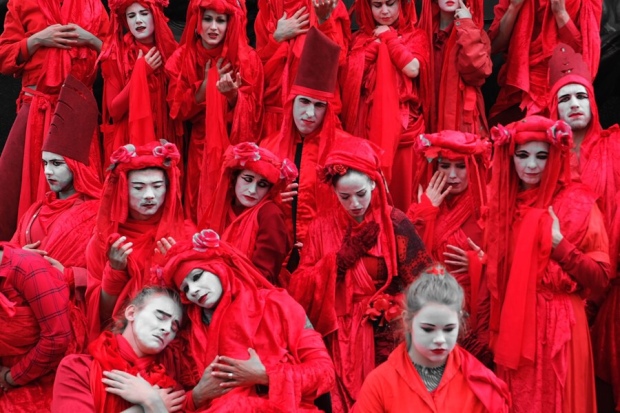 So let’s get this straight, these XR hippiecrits use the very materials and dyes to make a fashion statement to push their agenda.

Tell you what XR, given that China is the largest producer of textiles, please take your protest to Beijing. While you’re at it you can protest China’s 29.3% (and growing) impact on CO2 emissions. Two for the price of one. President Xi would warmly welcome your presence in one of his jails. Afterall you encourage peaceful arrest although you might want to update your legal assistance page for those who do end up being arrested in Tiananmen Square. 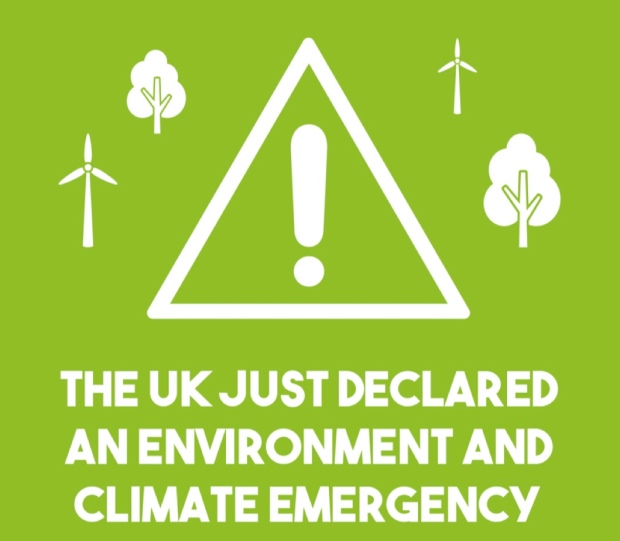 This is the first step in the government telling the truth about the climate and ecological emergency. Pressure on our politicians will now increase as nothing but decisive action will suffice.

This issue isn’t going away and neither will we. The International Rebellion will continue until all our demands are met.

This is the post put forward by the Extinction Rebellion (XR) today. There is some irony as to how a parliament that can’t vote the will of the people over three years, can unanimously find an immediate position on a “climate emergency” after being visited by a 16yo. Labour leader Jeremy Corbyn called the motion.

What exactly is a climate emergency? Wales, Scotland and cities like Bristol have declared it but not defined it. If we need any further evidence of how dysfunctional UK politics is, this confirms it. Not one dissenting voice? Virtue signaling to fix a problem that constantly gets debunked and worse no well thought out positions. Or will the government just ask Greta Thunberg for her manifesto?

If XR plan to have every demand met, will UK Parliament acquiesce them? Here are their demands

1. The Government must tell the truth about how deadly our situation is, it must reverse all policies not in alignment with that position and must work alongside the media to communicate the urgency for change including what individuals and communities need to do.

Tell the truth? Wow. If only we could legislate that. Shall we have a Ministry of Truth and Room 101 for heretics?

2. The Government must enact legally-binding policy measures to reduce carbon emissions to zero by 2025 and take further action to remove the excess from the atmosphere. It must cooperate internationally so that the global economy runs on no more than half a planets worth of resources.

Is zero carbon emissions by 2025 even feasible? Will we just ban petrol and diesel outright? Ban air travel?

Are governments comfortable turning the second most expensive household asset to effectively zero? Because phasing our fossil fuels and being zero carbon by 2025 means junking the economy.

How do the intelligent brains of XR plan to power homes in Britain when fossil fuels make up 38% and nuke (which doesn’t produce CO2) another 13% of the mix? Good luck getting agreement of all this mammoth investment to replace it all with renewables. Where will all these new plants go? New power plants are years, often decades in the planning, safety and construction.

Shall we regulate during this scrap and build program that odd numbers on your street can use power on Monday, Wednesday, Friday and alternate Sundays? And the even numbers the other days? Have they realized that Merkel’s green madness has made German power prices some of the highest in the world leaving 330,000 people with their electricity cut off for inability to pay? Maybe celebrate it being down on the previous year’s 331,000. Does XR see such things as an acceptable price to pay?

3. By necessity these demands mean an initiative similar to those enacted at times of war. We do not however, hand further power to our Government, we demand a Citizens Assembly to oversee the changes, as we rise from the wreckage, creating a democracy fit for purpose.

The Citizens Assembly will likely be chosen by apparatchiks. Not to worry, the education system is already in place.

“Climate science is now mature enough that we do not just count climate change in terms of degrees of additional warming, we count it in terms of human lives lost, biodiversity reduced, and land claimed by the oceans...The youth, championed by Greta Thunberg, and taken up by school children around the world, recognise this is an emergency, so it is of the upmost important that our leading institutes on climate change such as the University of Bristol recognise it too.”

Lives lost? Land claimed by oceans? Huh? Well it’s ok because we only need to listen to a spoon-fed 16yo. No wonder she is depressed when she’s had her head filled with 5 years of indoctrination about how her life is doomed.

We should be worried how our elected leaders are so willing to roll over without standing for anything. It reminds CM of that scene in Monty Python’s ‘Holy Grail’ where townsfolk are trying to burn a witch. When Sir Bedivere debunks their witch hunt they come to their senses. But they burn her anyway.