It seems that Titanic shipbuilder, Harland & Wolff, has been thrown a £6m lifeline after the Belfast based business looked to sink into receivership. The company has 79 staff, well down on the historic peak of 35,000. The trends are only too self-evident.

The OECD notes “As of March 2018, the global order book of registered ships totalling approximately 78 million CGT, thus continuing to remain at historically very low levels. In year-on-year (y-o-y) terms this represents a decline of around 10% and is almost 66% lower than the peak in September 2008.  The order book continuously declined after 2008 before stabilising in 2013 and staying above 120 million CGT throughout 2014. With deliveries stable and new contracting at record lows, the order book again decreased substantially in 2016, declining by around ¼ from January 2016 to January 2018. In the course of 2018, new ordering picked up again from its lows, but declined in the first quarter of 2018.”

It wasn’t so many years ago that Korea’s largest container transporter Hanjin Shipping declared bankruptcy.  The above chart shows the daily shipping rates for the industry which remain tepid for the past decade. The problem with the shipping industry is the fleet. Ships are not built overnight. Surging order books and limited capacity meant that as the pre-GFC global trade boom was taking place, many shipping companies were paying over the odds without cost ceilings on major raw material inputs (like steel). This meant that ships were arriving at customer docks well after the cycle had peaked at prices that were 3x market prices because of the inflated materials.

H&W may live to see another day, but the consolidation in the shipping industry will be ongoing. P.22 of this report shows the slowing $ value of trade in recent months.

We are often told how robust the world economy is. Global trade tends to be a good indicator. Looking at the latest Clarkson’s December 2018 annual review, we can see that the number of shipyards that make the vessels (20,000dwt+) that look after global trade has slid from a peak of 306 in 2009 to 127. Newbuild orders have slid from 2,909 vessels to 708. Wärtsilä is anticipating a gradual recovery in contract new builds as high as 1,200 ships by 2022. Wishful thinking?

According to Clarksons, the global fleet of all types of commercial shipping is 50% larger than it was before the GFC despite the World Trade Organization saying growth in global trade for 2019 is expected to fall 2.9%. The WTO has fingers crossed for 2020. The charts in this WTO report show the sharp slowdown in freight in Q4 2018 and Jan 2019. 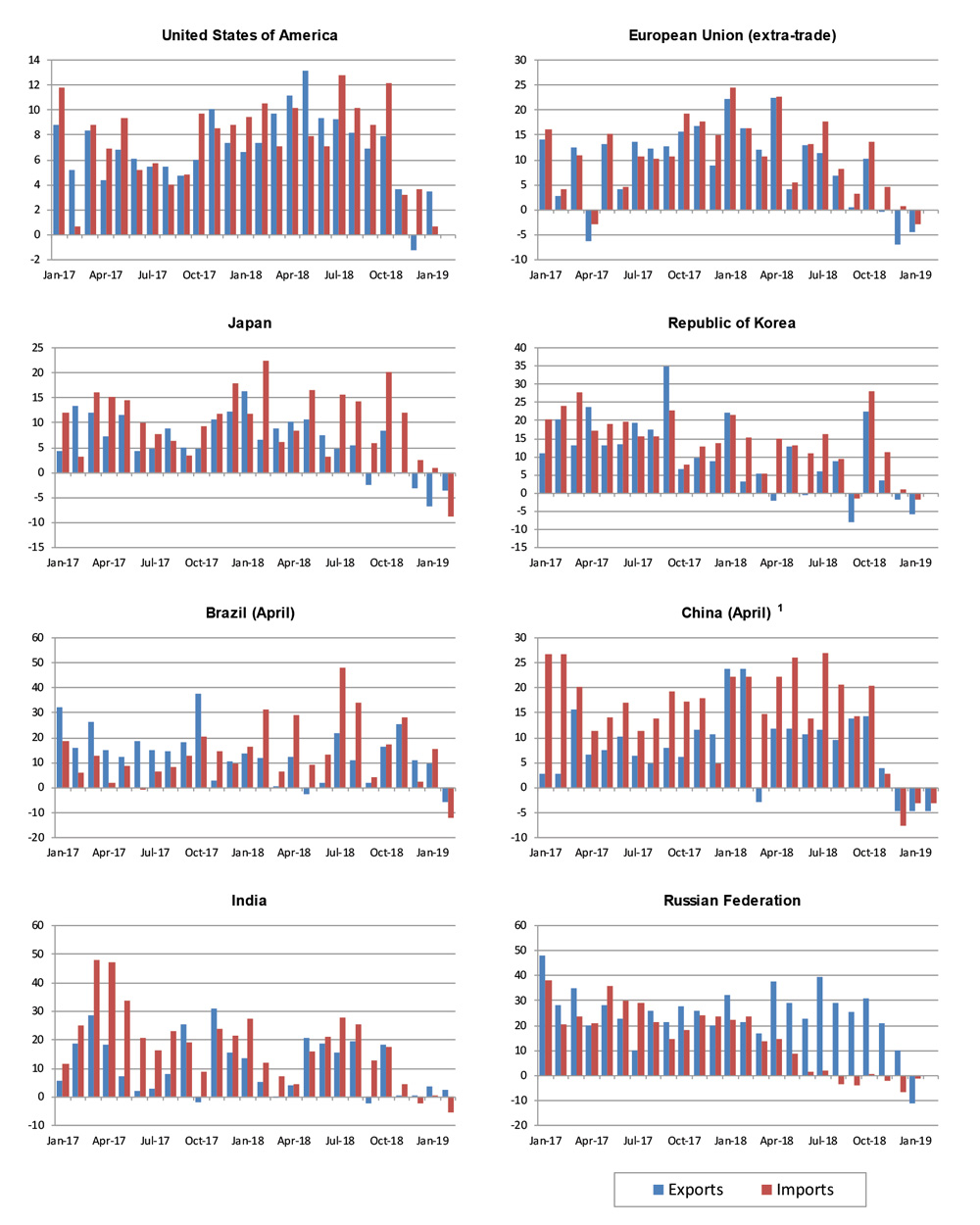 Germany’s five leading ship financiers reported outstanding ship-related loans of 59 billion euros at the end of 2016 with an average problem loan ratio of 37%. In recent years they have been busy reducing or selling off shipping portfolios. HSH Nordbank required a 10 billion euro bailout by its 85% owners, federal states Hamburg and Schleswig-Holstein. It ended up being swallowed by private equity and renamed Hamburg Commercial Bank. Nord LB was looking to bail in Bremer LB beyond the 54.8% it already owns. Bremer LB had to write off  €400m of its shipping portfolio.

China has been aggressive, filling the void left by the Germans with high leverage financing to support the longer-term objectives of the Belt & Road Initiative. One wonders whether China plans to spoil the market by squeezing a damaged sector further. It wasn’t so long ago that South Korea’s  Hanjin Shipping went bust.

BTIG reported that ship scrapping in Q1 2019 was up 35% to 107,000dwt. Ship owners tend to scrap ships if the cost of idling or operating them exceeds this. Note Capesize shipping rates have fallen to around $9,000/day well below the $25,000 breakeven rate. The bellwether Baltic Dry Index is 27% down year on year and 85% below the peak levels seen in 2009.

The shipping industry has been sick for a decade. The majors have been busy merging, cutting debt and right sizing. Unfortunately it is  still in a pickle. A global slowdown will only exacerbate the issues in the industry.

The one area that looks interesting is the scrubber makers (eg Alfa Laval, Valmet, Fuji Electric). There has been a sharp uptick in growth for retro-fitting pollution equipment to existing ships instead of buying new equipment. Sometimes the best investments come when industries that require massive consolidation hit breaking point.

Yet more eco-mentalism being celebrated by the UN International Maritime Organisation (IMO) with little thought to the very economics that has crippled shipping companies for so long. Shipping companies need to save themselves before bothering to save the planet.  Although the back slapping for the supposed “watershed agreement” (their words) will be achieved by 2050. The most pressing global issue of our times and these metal hulks which burn the ugliest, dirtiest and cheapest fuel (bunker) available have 32 years to get there. Perhaps the irony is that bankruptcy might take half the ships out of service meaning the emissions target could be hit decades earlier. A brief look at history.

It wasn’t so long ago that Korea’s largest container transporter Hanjin Shipping declared bankruptcy.  The above chart shows the daily shipping rates for the industry which remain tepid for the past decade. The problem with the shipping industry is the fleet. Ships are not built overnight. Surging order books and limited capacity meant that as the pre GFC global trade boom was taking place, many shipping companies were paying over the odds without cost ceilings on major raw material inputs (like steel). This meant that ships were arriving at customer docks well after the cycle had peaked at prices that were 3x market prices because of the inflated materials.

The pricing market was looking grim in 2016. CM wrote, “These are the latest prices in 2016 vs the 5 year average by type. New LNG, grain and oil carriers etc are holding up but the used market is being slaughtered. Ships are generally bought with a 25-yr service span at the very least. Global seaborne trade growth has shrunk from 6%+ growth in 2011 to less than 2% now.”

Take a look at the financials of global leader Maersk. It recorded $US27.1bn of revenue in 2012 but only $24bn in 2017. Yet profitability slumped from $2.1bn to a paltry $25mn. Maersk carries around $34 billion in deferred tax loss carry forwards. That is the extent of the ‘financial baggage’ it still carries. The three major Japanese shipping companies have had a hell of a hit to profitability in recent years. See below.

If the volume of goods transported by sea increases 3% every year, the volume in 40 years will be 3.3 times today’s volume. To cut total CO2 emissions in half by 2050, CO2 emissions per ton-mile need to fall by 85%. NYK is looking at the following ship that will cut emissions by 69% in 2030.

If the shipping industry is not fixed through market forces it will be difficult to repair the profitability and balance sheets that would allow the companies to invest in more eco friendly vessels. Bankruptcies are mergers are needed to streamline the sector.

According to Clarksons, the global fleet of all types of commercial shipping is 50% larger than it was before the GFC despite the World Trade Organization saying growth in global trade has crept up from $14.3 trillion in 2007 to $15.46tn in 2016 (+8%). Scrapping rates have fallen 40% since 2012 but since 2017 have risen moderately, appealing to owners with too much tonnage on their hands.

The International Chamber for Shipping’s secretary general Peter Hinchliffe said, “This is a ground-breaking agreement — a Paris agreement for shipping — that sets a very high level of ambition for the future reduction of carbon dioxide emissions…We are confident this will give the shipping industry the clear signal it needs to get on with the job of developing zero carbon dioxide fuels so that the entire sector will be in a position to decarbonise completely.”

What a wonderfully naive plan. At least the IMO can feel warm and fuzzy despite so many headwinds ahead of an industry still in structural distress. 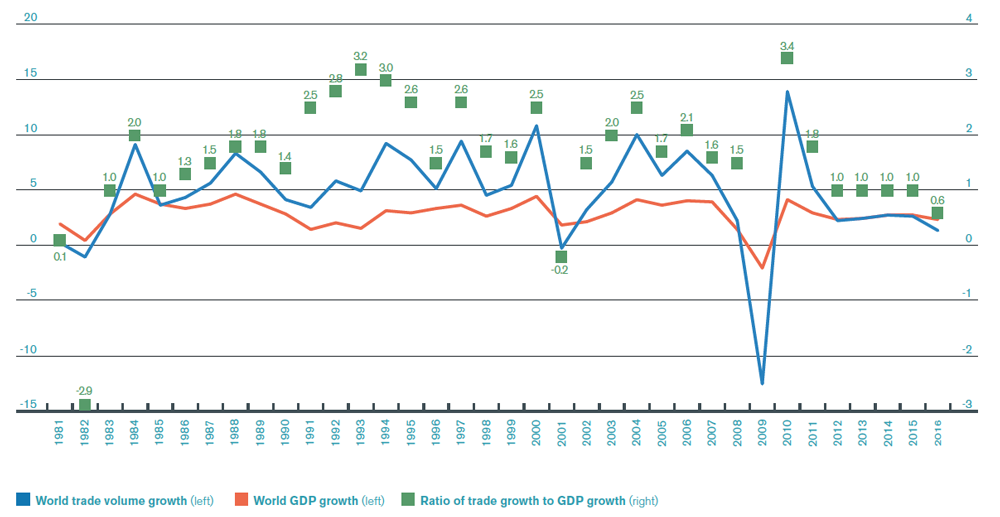