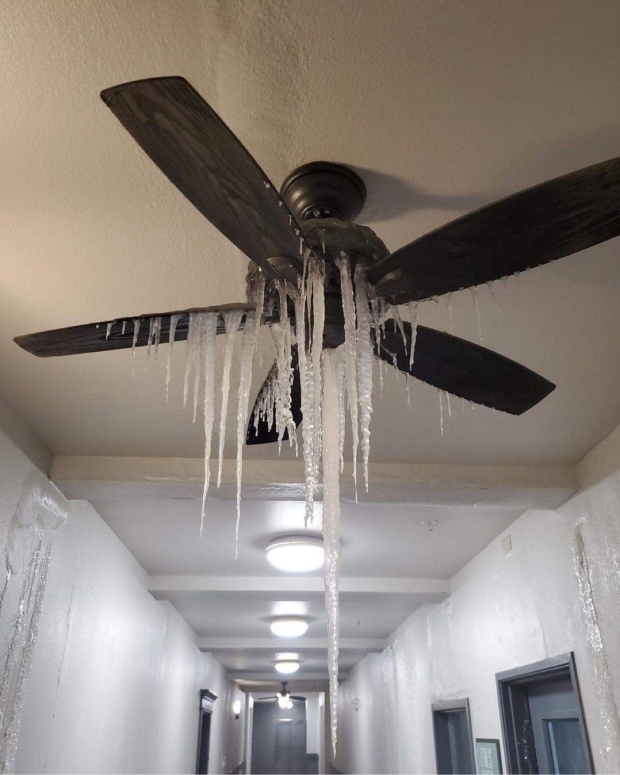 They say the only salt and ice you get in Texas is for Margaritas.

This is a summary of the power shortage experienced during the big freeze by Rep Dan Crenshaw of Texas:

“With blackouts across Texas, many are wondering: what happened?

Leftists are cheering a “red state” having energy problems.

Here’s the truth about what happened.

A mix of over-subsidized wind energy and under-investment in gas power means we didn’t have enough base load energy for a massive spike in demand.

West Texas had wind turbines that had to be de-iced. The little energy that power regulators planned on being supplied from wind was now gone.

We have almost 31GW of wind installed on the grid, but on Monday we couldn’t even depend on 6 GW working.

To make matters worse, existing storage of wind energy in batteries was also gone, because batteries were losing 60% of their energy in the cold.

This is what happens when you force the grid to rely in part on wind as a power source. When weather conditions get bad as they did this week, intermittent renewable energy like wind isn’t there when you need it. https://www.forbes.com/sites/salgilbertie/2021/02/15/texas-outages-put-reliability-of-renewable-energy-in-the-spotlight/

We only have 4 nuclear units in TX, near Houston and Dallas. One of the reactors near Houston turned off due to a safety sensor freezing. No problem with the reactor. But the lack of the sensor forced the plant to shutdown, as a precaution.

(On another note, this shows how safe nuclear is. Lots of safety precautions.)

ERCOT planned on 67GW from natural gas/coal, but could only get 43GW of it online. We didn’t run out of natural gas, but we lost the ability to get it transported. Pipelines in Texas don’t use cold insulation – so they froze.

Every natural gas plant stayed online. The “downed” plants were due to scheduled maintenance.

Gov. Abbott made the right call in diverting all natural gas to home heating fuel and then electricity for homes. Gas and coal brought a stable supply of energy, but still not enough.

Why don’t we have extra gas power when we need it most?

Because years of federal subsidies for wind has caused an over reliance on wind and an under-investment in new gas and nuclear plants.

Bottom line: fossil fuels are the only thing that saved us. They are *base load* energy.

If we were even *more* reliant on the wind turbines that froze, the outages would have been much worse.

This raises the obvious question: can we ever rely on renewables to power the grid during extreme weather?

No, you need gas or nuclear.

And subsidizing investment in wind has pushed gas and nuclear out.

Now we live with the consequences.

The push to decommission baseload power sources like natural gas would be disastrous when trying to keep the lights on in Texas.“ 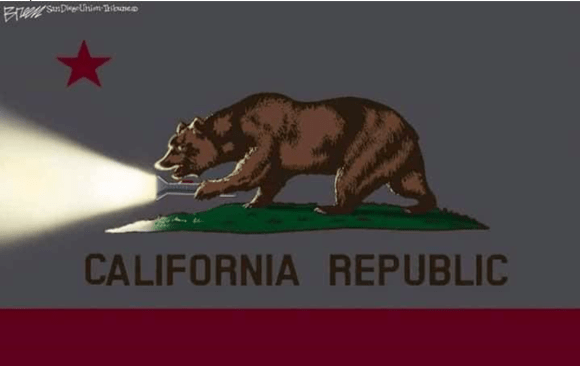 Oh the irony of a company, PG&E, that has 100% knowledge of the diversity of its workforce and suppliers but is unsure of the status of the very infrastructure of the core business. It has been enforcing blackouts to assess the matter. That’s what one calls ‘progressive‘ in the world’s 5th largest economy. This cartoon sums it up.

Is it any wonder it filed for bankruptcy. Get woke, go broke. 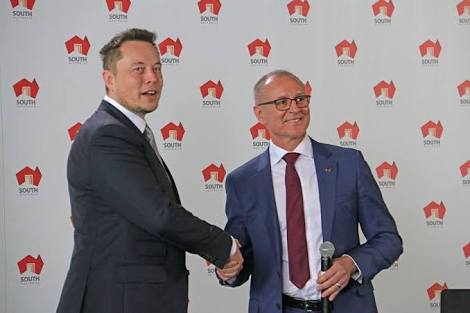 No matter how dreadful the Liberals under Turnbull are at a federal level, South Australians realized that the 16 years of Labor in SA led them to the slowest growth, highest unemployment and most expensive electricity prices in the nation thanks to the loony renewables policy of the Weatherill government.  He ran a platform to double down on the failed policy that led to multiple state wide black outs. Common sense prevailed and he was rightly booted.

No amount of blowing up coal fired power stations or smug smiles while shaking hands with Elon Musk to make out as if wasting $560mn more of taxpayers money was intentional, could sway the hearts of the electorate.

The Libs gained a majority on its own right with 25 seats. Labor set to lose 5 seats to 18. The Greens lost more ground in SA, slipping over 2% to 6.6%. No seats. At the sharp edge of the wedge, a growing number of constituents don’t need the virtue signaling. They want sustainable jobs, sensible stewardship of their tax dollars and reliable, affordable electricity.

Whether the Libs can actually deliver is another question but Premier Weatherill’s flagrant failure came home to roost. However Turnbull mustn’t take these state victories as an endorsement for the coalition at the federal level. He’s still badly burnt toast. 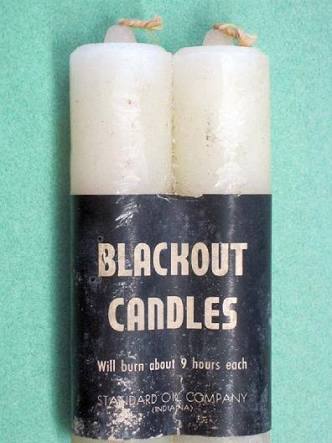 The green madness in Australia continues apace. Virtue signaling governments whose efforts are nothing more than expensive tokenism at best have led the Australian energy market regulator to warn of blackouts in Victoria during the coming summer. In what world would anyone logically trade perfectly reliable electricity for renewables which have a track record of failure in neighboring South Australia? On even the most pessimistic warming scenarios Australia’s renewable efforts will have a 0.00014 degree impact in 100 years. So many billions frittered away for absolutely no gain. Industries made deliberately less competitive because their electricity prices have doubled in a decade despite being a country totally rich in raw materials to make us one of the most efficient. What is worse is that South Australia which is 40% renewable has had to blow another $600mn of taxpayer funds on back up power. Initially it will be diesel generators that burn 80,000 litres per hour until a gas plant can be built. Despite the massive failure, the Premier of SA talks it up as though he is noble. At what cost? The highest electricity prices in the world, the highest unemployment rate in Australia and the slowest growth. Surely a legacy worth protecting. 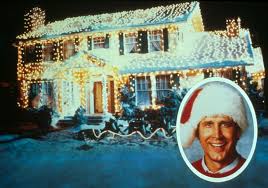 The boffins at MIT are forecasting that EVs charging with home fast chargers could add the equivalent power consumption of 3 houses to the grid. According to MIT, “Electric cars being sold today can draw two to five times more power when they’re charging than electric cars that came on the market just a couple of years ago.”

Utilities are now prioritizing areas that are seeing a higher proportion of EVs sold as the risk is that failure to upgrade the connectors could lead to more frequent blackouts. The upgrade costs are borne by all ratepayers, not just the EV buyer.

According to a UK National Grid report, peak demand for electricity will add around 30 gigawatts to the current peak of 61GW – an increase of 50%.

It is doubtful whether most governments have factored in the true costs of EVs on electricity markets other than vague commissioned reports that get them to the result their looking for. Then when it’s too late and EVs potentially start crashing the grid then comes all the regulation around when you can charge and the decade of planning required to set up a new back up electricity facility to make up for the shortfall.

Watch it unfold. Governments doing what they do best. Making promises by which time they’ll be out of office when the true costs must be borne.

South Australia’s Premier Jay Weatherill is looking to get a $50mn+ selfie with Elon Musk as Tesla’s battery storage packs will be selected to keep the lights on the state for c.90 seconds in the event of (the state’s frequent) blackouts. Not withstanding the blithering incompetence in adopting a power policy which will end up costing SA taxpayers a further $560mn+ to cover up the green madness which got them into this mess in the first place, Weatherill gets to turn a massive failure into a virtue by maximizing exposure with the world’s most successful rent seeker (that is a compliment) to appeal to the state’s contributions to renewable energy in full knowledge of it creating the least reliable yet most expensive electricity prices, the highest unemployment rate and slowest growth in the nation. Even companies like Coca -Cola have packed up after more than 50 years operation because of the untrustworthy grid and usury plug prices.

Of course Musk has said he’ll install in 100 days or it is free. As mentioned several months ago when the plans were on the table this will only be enforceable after his lawyers have added every contingency to ensure it is just an optical illusion of insurance. Still that won’t matter to Weatherill. He wants the pride of saying he has the world’s largest battery storage plant even though it is pointless in practice. Perhaps a bronze bust and keys to the City of Adelaide will be given to Musk for his humanitarian efforts.

Still one has to hand it to Musk. His ability to get governments to turn over cash subsidies on EVs and unproven technologies shows his guile as a salesman extraordinaire. I’m green with envy, literally! 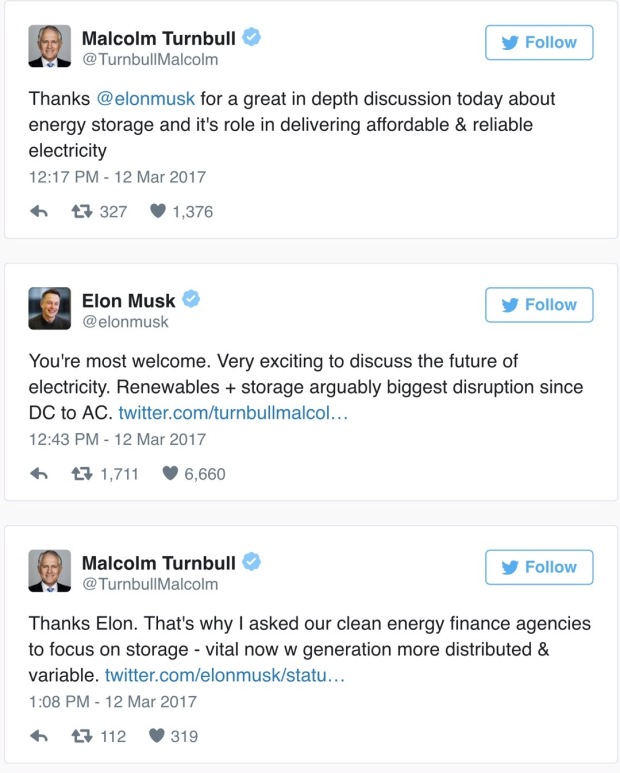 It is no surprise that Prime Minister Turnbull is having another ‘thought bubble’, this time with Tesla CEO Elon Musk. I am sure his thinking is it may create another diversion for his weak, indecisive and increasingly unpopular leadership. Using the likes of an international celebrity like Elon Musk he can appeal that he’s hip with global trends. In reality he is trying to steal Weatherill’s limelight. Taxpayers won’t want to pay up for something that hasn’t been proven on the scale that is required in South Australia. Storage isn’t Australia’s problem. It is loony renewable targets like we have in South Australia which are showing the limitations of green power. The Musk plan highlights the stupidity of

100 days or it is free is a gimmick. It is one thing to promise these packs, it is another to be able to install. The guarantee undoubtedly come with huge quid pro quos which will undoubtedly fall on the government – such as provision of land, connection to the grid etc etc. The only thing free will end  up being the set of steak knives. Turnbull can whistle all he wants about storage but Australia will has a growing generation problem which will worsen with the crazy renewable targets being espoused. If states can’t produce enough electricity to meet their own demand, then there is nothing left over to store. That will mean even more expensive inefficient renewables will be sought by governments in order to feed the batteries which sadly won’t lower prices. Taxpayers will get slugged.

Originally Musk had called up SA Premier Jay Weatherill to solve the total farce his energy policies have proven. South Australia has the country’s most expensive, yet most unreliable electricity supply.  SA scrapped its coal-fired power and relies on wind power for 40%of its electricity. When the wind doesn’t blow, SA relies on backup power from neighboring Victoria, which has its own ridiculous renewable energy targets. Victoria has announced the closure of the Hazelwood coal-fired electricity plant which constitutes 20% of Victoria’s power. So Victoria’s ‘pipe’ of backup will all but disappear.

Musk is a master of the deal. If we place the same faith in Turnbull’s judgement on things like new submarines, child detention centre Royal Commissions, proposals to hand income tax powers back to the states and so on we can be pretty sure he’ll probably try to do a deal with Musk. Might be worth buying Tesla shares on the basis of the Prime Minister’s unbelievable ability to stuff almost everything he touches almost guarantees it. Next thing we’ll see the number plate C*1 (the PM’s car) attached to a Tesla instead of the BMW 7-Series.