One could be easily forgiven for thinking this was the Babylon Bee. Nope. It’s WaPo.

The country faces an election of choices as clear as any we have had in modern times, with clear consequences as well.

Vote for President Trump and you are voting for the Constitution, military strength and robust economic growth.

Vote for former vice president Joe Biden and you are voting for bureaucrats, appeasement abroad, and economic entropy….

…Trump is chaos theory contained in a man, an explosive combination of complete candor as to what he thinks and feels, a willingness to brawl, an almost animal energy for the fray.

Biden is clearly not that. He is mostly invisible these days, but he hasn’t just lost a step. He’s lost a lap. His White House would be marked by echo-chamber enthusiasts and the control of the appointees he brings along with him, a haphazard and dangerous step for the republic…

…Nothing has worked to slow Trump down, so now it must be racial politics, the scourge of the nation put not to the service of justice for the poor, who Trump had served quite well with good jobs until the Chinese Communist Party lied about a deadly virus unleashed on the world and upended the blue-collar boom. That boom is returning. It would once again lift all communities.

For WaPo to be publishing this type of article shows how exposure to sunlight can cure Trump Derangement Syndrome.

As we keep reminding our readers. The Democrats are simply not making a strong case as a credible alternative to Trump, especially the behaviour of Democrat state governors and mayors during COVID19 and their empty virtue signalling, weakness and radical responses to the ‘protest anything under the banner of BLM‘ movements.

Even we Aussies can tell that the majority of Americans are patriots when push comes to shove.

Never forget that “lived experience” is a powerful force. We don’t think Trump’s first 3.5 years will be forgotten at the polling booth. Outside of all his bluster, vulgarity and unorthodox style, he’s made a lot of headway.

We have often said that journalistic integrity will only return when the mainstream media loves America more than it hates Trump. How long till the rest of WaPo channels Hugh Hewitt?

Democratic Party hopeful Bernie Sanders announced overnight that he is dropping out of the presidential primaries. For the first time ever, his actions actually led to substantial wealth creation, sending the S&P500 up 3.4% on a $21 trillion market cap index.

All jokes aside, we thought markets have found a (short-term) bottom. S&P has reclaimed almost half of the peak since the corona-crash. We question the sustainability of this rally. At the moment the trend is our friend. We pointed out that the kitchen sink would be thrown and provide one last hurrah before the realities of businesses coping with a return to business played out.

As the lockdown continues, it is very hard to determine what the actual prints will be for large-scale macro-economic data and where that fits into expectations. We know that the Fed has already been out hosing the credit markets with promises of unlimited QE.

The housing market is already giving us hints. According to the Mortgage Bankers Association’s (MBA) Forbearance and Call Volume Survey, the total number of loans in forbearance grew from 0.25% to 2.66% from March 2 to April 1, 2020, with mortgages backed by Ginnie Mae seeing the largest growth (from 0.19% to 4.25%).

While not strictly an apples for apples comparison, the Delinquency Rate on Single-Family Residential Mortgages, Booked in Domestic Offices, Top 100 Banks Ranked by Assets peaked at 12.89% in 2010.

Plenty of trouble ahead. The market complacency is quite astonishing.

Denver councilwoman Candi CdeBaca (D) tweeted “#solidarity Yaaaas!!” when she saw a post which encouraged the infection of Trump supporters with Coronavirus.

The Colorado Republican Party responded with : “Councilwoman CdeBaca praising a social media post calling for Trump supporters to be infected with the coronavirus is simply disgusting. There can be no room in our politics for wishing harm on Americans who have different political beliefs. Democrats in Colorado and across the country need to condemn this evil statement…Councilwoman CdeBaca…[should] resign immediately.”

No surprises that Cdebaca is a Bernie Sanders supporter. The tolerance of the left. Dignity, respect and fair play. Didn’t Michelle Obama once claim, “when they go low, we go high“?

17,000 showed up to Bernie Sanders’ latest rally in Washington. We shouldn’t underestimate the scope of his support despite not being able to cost healthcare for all, free education or canceling student loan debt. Some pundits put it at $60 trillion.

While we still think Trump will win 2020, the Democrats need to carefully weigh their hatred of the president vs their dislike for Sanders stealing the Democratic nomination as an independent. The DNC is no stranger to dismissing democratic process in the primaries.

We very much doubt Bernie Sanders would endorse what his field officer said. Perhaps his staffer is just disgruntled that Bernie cut his hours…

The Drudge Report is suggesting Mike Bloomberg wants Hillary Clinton as a running mate as polling suggests the duo would be a “formidable force.”

We’re not sure whether to laugh or cry.

Don’t forget that Michael Bloomberg endorsed Hillary Clinton ahead of the 2016 election. Recall he was intending to run as a Republican back then. When his bid failed he threw his support behind Trump’s opponent.

Perhaps a formidable force in rallying Trump deplorables to the ballot box to rub her nose in it?

Clinton continues to show herself to be bitter since losing the election in 2016. Of course absolutely none of it was her fault. How nice it was of her to throw Bernie under the bus late last year when she said that he destroyed her campaign by not endorsing her after the rigged nomination.

Still, thankfully friends like Michelle Obama justified Hillary’s loss when she said, “Any woman who voted against Hillary Clinton voted against their own voice!” Who knew?

Would such a combo be a plan to have the DNC unseat Bernie Sanders from the front of the queue? Does the DNC think Bernie voters hate Trump more than them post 2016? It sort of has that stench about it.

What a gift for Trump. At the very least HRC could get one step closer to being the first female head of state, especially if she adopted Nancy Pelosi’s prayer guide for the president.

“Today, the 3 wealthiest Americans own more wealth than the bottom half of our people, and income and wealth inequality is worse now than at any time since the 1920s. This is a moral outrage and bad economics. Unacceptable.”

Despite Bernie Sanders’ net worth of $2.5mn, there is an irony for him to act like hr speaks for the poor and oppressed.

The funny thing is that many Americans aspire to be as successful as Jeff Bezos, Bill Gates or Warren Buffett. Undoubtedly the Bottom 50% use/have used Windows, have ordered something on Amazon or used products that sit in the portfolio of Berkshire Hathaway. Bezos, Gates and Buffett all came from relatively humble beginnings. So it isn’t a system that has gifted their success.

What Sanders is forgetting is that the net worth of the Bottom 50% has improved substantially since Trump took office. What is often overlooked by politicians is the simple fact of “lived experience.” Sanders can cry about the”gap” all he wants but if a growing number of people feel less under a rock, they’ll gladly overlook the bluster of Trump and his loose Twitter fingers if he keeps delivering for them. It works the other way too. Telling voters how great they have it when they don’t has the opposite effect.

Sanders should be outraged that the ultra-wealthy have done much better under Obama with a 100% gain in net worth under his term vs the paltry 15.3% so far under Trump.

Best he become a Republican instead!

Yet more old people who clearly must not get it.

Another example highlighting how the current generation believe that they’re smarter than the previous one as well as the one that will follow them. 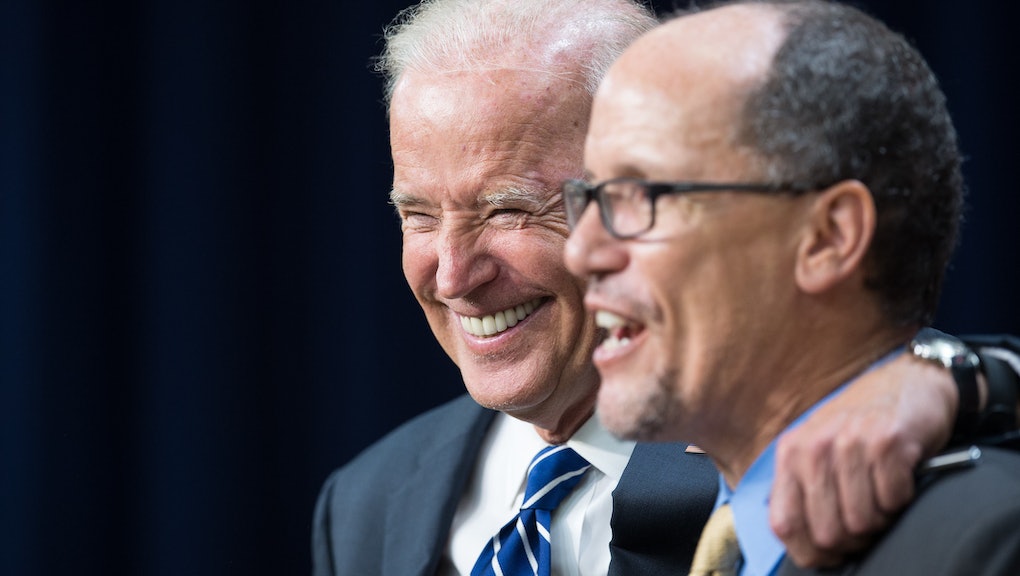 A.F. Branco’s cartoon this morning hit the nail on the head re the Iowa Caucus, or should that be Circus?

So divided are the Democrats internally that the thought of Bernie Sanders winning has caused them to blame a glitch in the voting to fiddle the numbers so he doesn’t win (again).

The party told NBC News that it was “doing our quality control checks, making sure the numbers are accurate. People are still caucusing, we’re working to report results soon.”

So much for respecting democratic processes.

What a farce. All to get more centrist Joe Biden on the ballot. Are memories so short to remember what happened when the DNC shafted Bernie for Hillary in 2015?

How on earth do they intend to beat Trump when they can’t even run their own internal processes? Don’t they see Americans are in full view of this incompetence?