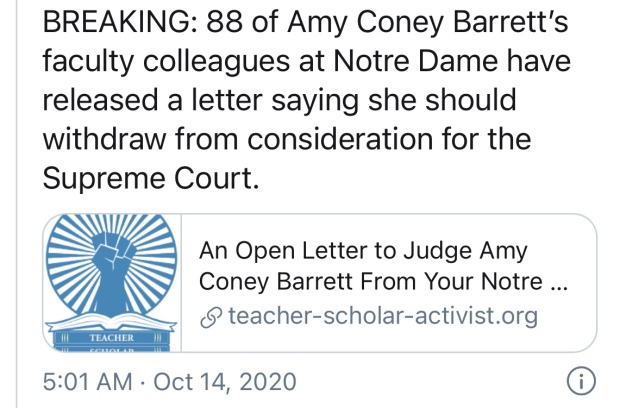 Oh, the sanctimony. 88 faculty colleagues at Notre Dame co-signed a letter requesting Judge Amy Coney Barrett halt her confirmation process and step aside til after the election.

This follows a pattern we have reported on before where left leaning academics/activists pass off high numbers of co-signatories as a sort of validation process. Closer analysis reveals how often the very people who would make these letters credible are often conspicuously absent.

2) Or the Feb 2020 Safe Climate Declaration which hosted 100 speakers of which less than 5% were climate scientists. Most were from academia, media and high schools.

3) Or the 268 cosignatories of an open letter in support of Extinction Rebellion (XR). Perhaps the most hilarious signatory to the letter was Matthew Flinders. Our esteemed explorer seemed to have navigated his way back to life after 200 years.

4) Or the the sanctimonious video made by the World Mental Health Coalition (WMHC) where all members co-signed the case for Trump’s lack of mental capacity. Sounds impressive using “world”, doesn’t it? Given the World Psychiatric Association represents 200,000 members worldwide, WHMC’s 37 members seems rather pathetic by comparison. Be sure to read how they were prepared to ditch their Hippocratic oath to smear Trump.

5) The liberal artists who caved so soon after signing a letter condemning cancel culture.