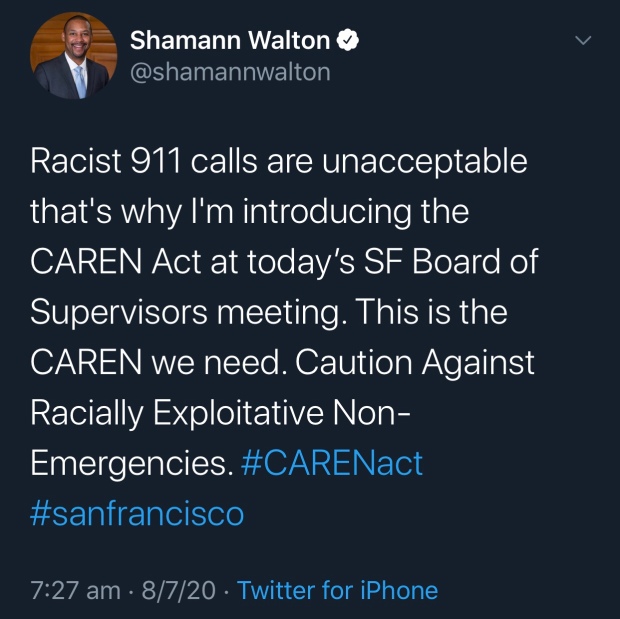 Making fake 911 calls is against the law. The Caution Against Racially Exploitative Non-Emergencies (CAREN) Act has been introduced in San Francisco to stop racially motivated 911 calls.

CAREN was chosen after the name “Karen” which has entered the lexicon to describe white women who engage in racist behavior.

We have a few questions:

Who will determine what defines an emergency before and after the event?

Will callers be required to state their race and that of the supposed perpetrator(s)?

Will 911 dispatch read them a disclaimer on whether they’d like to cancel their request as burglars enter their home?

What body will ensure there is a fair assessment of the call and will activists form any part of the decision making body?Recent history shows many Democrat DAs showing political bias.

Will the City of San Francisco publish data on the racial profile of who gets charged under the CAREN Act?

Will the legislation apply equally across all races?

Maybe California State Assembly Member Rob Bonta can clear that up. He said, “This bill could protect millions of Californians from becoming targets of hate and prevent the weaponization of our law enforcement against communities of colour,”

So if a person of colour channels Jussie Smollett and makes a hoax 911 call on white people will they be exempt under the CAREN Act?

Perhaps the San Francisco Board of Supervisors should have listened to the 911 recording of a white mother and her child kettled by BLM protestors as they walked on her car? Would that be racially motivated?

Lawmakers in California, New York, Oregon and Washington have introduced similar bills. Guess what? All states run by the party of segregation – The Democratic Party.

You have to wonder how they aim to end racism with new laws which define segregation in application.