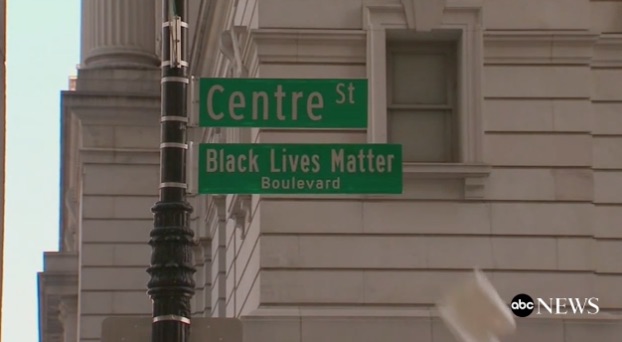 It tells the sad tale of violence in NYC as Mayor Bill de Blasio merrily paints BLM murals in front of Trump Tower at the same time he is requesting $7.4bn from the man he is trolling. He has even co-named a street ‘Black Lives Matter Boulevard.‘

60% said he hates the NYPD. NYC Scanner followed up with this to prove it.

“DeBlasio paints “Black Lives Matters” on 5th Ave this morning, but this man painted anti-police slurs all over the NYC Surrogate’s Courthouse on Chambers Street. Multiple NYPD Officers watched – but were unable to arrest anyone as per orders. @SBANYPD @NYPDnews”

Did the black lives matter to three unarmed black men cornered in the Bronx and shot in cold blood by two other black men?

Did the black life matter of a man shot dead crossing the street with his 7yo daughter?

Maybe we should just let the NYPD tell de Blasio exactly what they think of his stupid policies in this video.