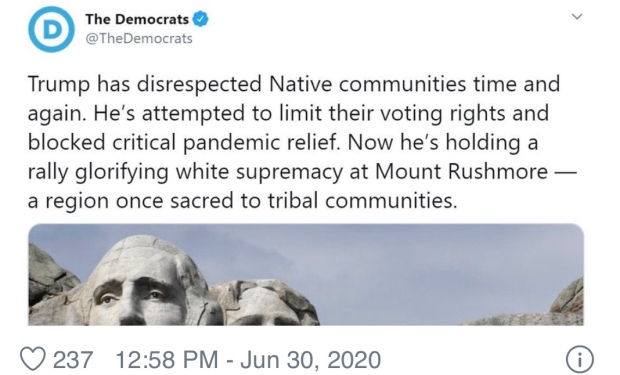 Gotta love the consistency of the Democrats in the identity politics sweepstakes.

They cared so much about George Floyd that they couldn’t even remember his name.

They used African Kente scarves to kneel despite not knowing the history and significance of the garment.

Speaker Pelosi then removed the portraits of former speakers who served in the Confederacy, not bothering to suggest it once in over three decades she’s been in office.

Now a rally at Mt Rushmore is being viewed as a symbol of white supremacy because it disrespects Native Americans. How rich coming from a party who has a member who lied about her Native American ethnicity to get ahead.

Perhaps Pelosi should run on demolishing Mt Rushmore as an election promise.