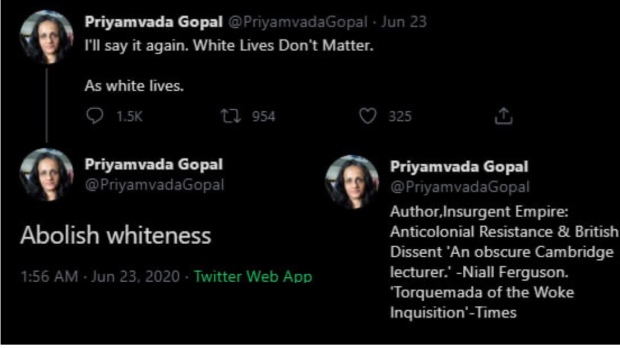 It used to be a source of pride to say one graduated from Cambridge University.

Gopal’s areas of study include gender and feminism, Marxism, critical race studies, and the politics and cultures of empire and globalization.

How does the dean tolerate the divisive radical professor?

We don’t have a problem with her free speech because her words speak for themselves. We question why the university tolerates faculty staff who bring the reputation of a prized tertiary institution into disrepute?

Even worse, she doubled down

“One thing about white racists, the ones who are emailing & tweeting about my losing my job. It REALLY gets up their nose that Cambridge–which they see as theirs, their Properly White Institution–has me in its teaching ranks. Deeply triggering.”

No, they care about the legacy of the institution. The university should seek to protect it regardless of the identity of the individual who made such thoughtless comments.

We shouldn’t be surprised at the deterioration in education standards. Who could forget the Stanford law professor, Pamela Karlan, who said during her testimony at the impeachment hearings that she crossed the street so she didn’t have to walk in front of Trump buildings.

When the left demand free education, we finally understand. If this is the standard, why drop a fortune on something that increasingly has no value?

Cambridge University’s reaction will be telling.