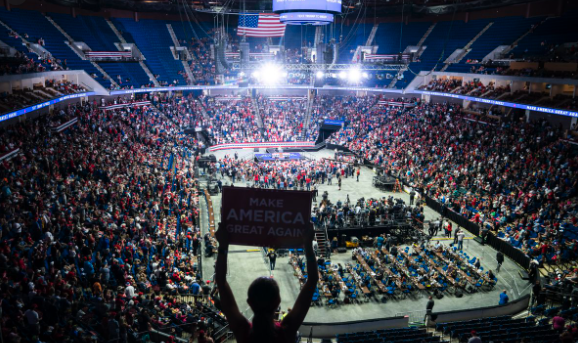 Fair play. Trump’s team were hoodwinked by tech-savvy teens on Tik Tok who signed up to an open platform, for seats they never intended on taking. The campaign manager should have been aware of the threat of fake sign-ups. The 19,200 capacity BOK Stadium only managed to get 6,200 according to the local fire department. Hardly a failure in a COVID-19 world and certainly more successful than anything Biden can muster. But empty seats makes for poor optics. The mainstream media is in raptures as it can rerun the story to boost flagging ratings.

Even Korean K-Pop fans relished the opportunity to interfere in an election that is not their own. A bit rich given their country has lived under the blanket of US security for decades and the man they chose to humiliate has been the only US president to set foot in North Korea to try to get a dialogue going. Just shows how few know their history.

Amazing how politicians like Alexandria Ocasio-Cortez and the media celebrated the Korean trolls when they were apoplectic with rage over Russian bots in the lead up to the 2016 election.

The next rally Trump holds won’t fall for the same trap. While the media celebrates the idea that supposedly bursting Trump’s ego as a victory, his followers are only likely to return serve the next time. Who would blame Trump supporters for thinking 800,000 sign-ups in a city with a population half that size might make the journey to get a seat almost impossible given it was first come first served? Still. Facts are facts. The stadium was c. 1/3rd full.

Perhaps with a newfound confidence in thinking Trump’s armour has been breached, the Democrats should have no issues deploying Joe Biden to the debates to humiliate the president some more.

How the Democrats respond to this rally will be more telling than those that didn’t attend it. At the very least, former Obama administration National Security Advisor Susan Rice fired her first salvo by saying Trump and his supporters in the Senate hopefully end up in “the trashcan of history.”

Note Rice did NOT say “his supporters”, but “supporters in the Senate” which the media on the right is incorrectly pushing.