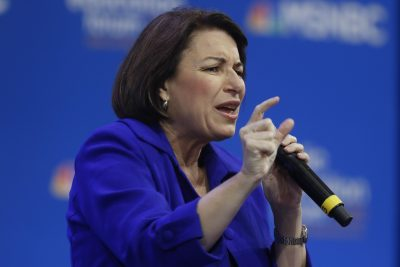 Minnesota Senator Amy Klobuchar showed why she would have been unfit to be Joe Biden’s VP.  She said Biden should choose a woman of colour. She said, “After what I’ve seen in my state and what I’ve seen across the country, this is a historic moment and America must seize on this moment.”

Don’t Americans just want the most qualified person for the VP role that will add value regardless of colour, sexual orientation or gender? Or do they want to bow down to the mobs in places such as her state which include the epicentre of the crisis, Minneapolis?

Why only a black VP, Senator Klobuchar? How about a Pacific Islander or Asian who represent far smaller parts of the American population?

How about the Native American community? Surely one is even more worthy of selection given she occupies some of the very lands that a VP would argue her ancestors were dispossessed of.

Or is that what Klobuchar means? Senator Elizabeth Fauxcahontas Warren. She is still in the running.

This is the poison of identity politics. It seeks to undermine the very cause it proclaims it helps. Klobuchar is the very racist and sexist she condemns to think that skin colour and gender are what is important.