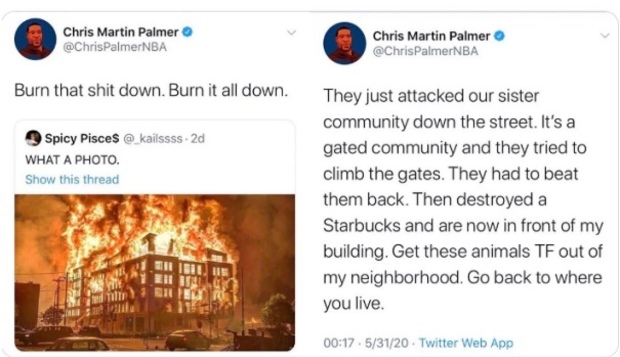 ESPN NBA reporter Chris Martin Palmer tweeted his joy at rioters burning down buildings in Minneapolis on May 28th until it looked like it would affect his own community on May 31st when he doth protest these out of town animals.

Not in my back yard?

“Welp. They’re gone. Security called the cops and they swarmed. Some scattered, others were arrested. (You hate to see it.) Tense moments. There’s graffiti everywhere. We live in a beautiful, safe community and have pride. These people had no pride and weren’t protesters.”

Presumably unsafe and ugly communities which have no pride are fair game to be torched by ‘animals’ who clearly aren’t protestors. Glad he cleared that up.

This is the sickness that undermines the lessons that should be taken away from this tragedy. It is despicable to see so many people want to boost their social media following by posting such stupidity.