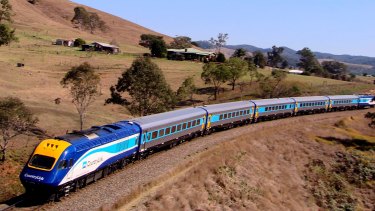 While the media has been quick to point fingers, are there any data buried inside the annual reports and releases from NSW Trains/Transport NSW in the lead up to the tragic derailment at Wallan yesterday that point to problems?

On Feb 18, 2020, several days before the accident, Transport for NSW made the following statement:

“The NSW Government is replacing the ageing NSW regional rail fleet of XPT, XPLORER and Endeavour trains, which includes trains that are up to 37 years old.”

A contract with Momentum Trains for the $2.8 billion project to design, build, finance and maintain the new regional rail fleet, along with a new purpose-built maintenance facility in Dubbo. This is an artist’s impression of the new rolling stock.

“Around 65 new state-of-the-art trains, including some 520 new carriages, will carry passengers to the Central Coast, Newcastle, Blue Mountains and Illawarra. The first train is expected to be in service by 2019 and the new fleet will be progressively rolled out through to 2024.” was announced. Unfortunately, 2023 is the realistic time frame for the first trains to arrive.

Problems with the existing fleet were revealed relatively frequently in press releases and annual reports.

“Temporary speed restrictions impacted services to Moree, Brisbane and Melbourne during the year. Trains were required to travel at reduced speeds due to extreme weather conditions and infrastructure issues. In addition, trespass and copper wire theft in the Victorian ARTC network also affected our ability to meet the punctuality target.

The reliability of the ageing XPT fleet has affected punctuality and we are working closely with the fleet, maintainer to minimise the impact on customers.”

As we can see XPT punctuality vs the other regional services it compares to shows a marked drop off to 55.7%.

“Signals passed at danger (SPADs) continued to trend upwards during the reporting period. There were 39 SPADs in 2017–18, which is 15 per cent higher than the previous year.”

Lost Time Injury Frequency Rates (LTIFR), which is a combination of physical and psychological stress revealed the following. A more than doubling of the previously recorded peak. Were staff feeling the pressure of the ailing fleet and infrastructure?

In the 2016/17 AR further problems were flagged with infrastructure problems.

“Temporary speed restrictions put in place by the Australian Rail Track Corporation (ARTC) were imposed periodically throughout the financial year and the number of these increased from January to June 2017. The speed restrictions significantly affected Intercity services on the Southern Highlands line and Regional services on the Melbourne and Canberra lines between Campbelltown and Goulburn…

In August 2013, a big push had been rolled out to improve reliability of the rolling stock.  Rob Mason, CEO of NSW Trains said in the statement:

“In addition to daily maintenance and our already high standards, there have been a number of measures implemented aimed at reducing the likelihood of faults on our XPT fleet.”

“Automatic Train Protection (ATP) is being installed on trains and tracks to boost safety across the electrified network. The ATP system monitors train speed and will alert the driver if the train has exceeded the permitted speed. It will also automatically apply the emergency brake if necessary…The first stage of the ATP System implementation (Newcastle Interchange to Cockle Creek) is planned for March 2019.”

In defence of NSW Trains, the annual reports all point to the acknowledgement of the problems with rolling stock and infrastructure.  Sabotage and theft of crucial safety systems seem to have played a role. Was that responsible for the increase in SPAD incidents? Is this a factor for the crash at Wallan?

It seems that V-Line train drivers had been warned (on advice from the Australian Rail Track Corporation) on Wednesday in a memo which stated that some of its trains would be diverted through the 15km/h Wallan Loop on Thursday. Apparently, the signal hut at Wallan had been damaged by the bushfires. In December 2019, Infrastructure Australia knocked back a proposal to upgrade the line from Melbourne to Albury as a national priority.

Plenty more tales will be told as the result of the investigation but it appears that these problems have been well flagged by NSW Trains since 2013/14.