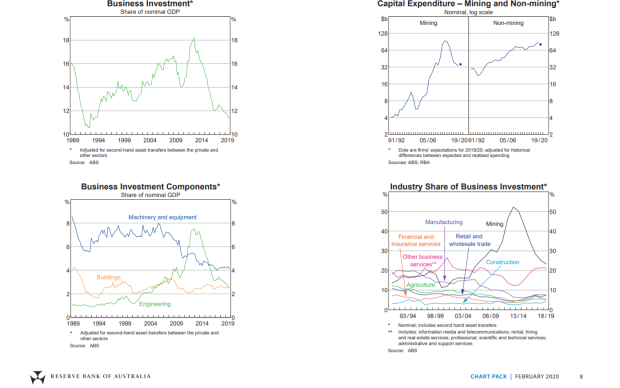 Flipping through the latest RBA Chart Pack, it is no surprise that business investment keeps sliding off a cliff. As a % of GDP, it has slid from a peak of 18% off the short-term trough of 14% (GFC) to 11%, which now puts it at 1994 levels. It proves the old adage that businesses don’t invest because interest rates are low, they invest because they have confidence in the cycle.

Our government should be looking at this with alarm bells. It doesn’t take too much imagination to work out that political instability has played its part.

Australia was once regarded as the vanguard of political stability in the region which made it a sensible investment choice for domestic and international investors as a place to do business. There was a comfort in knowing that there wouldn’t be revolving door prime ministers and flip flops on policy positions. After all, much business investment takes years to get to the production stage.

We have been running deficits ever since and cranking up the national debt (we wrote about it here) because it is clear we don’t have sensible free-market conditions to self sustain direct investment at anywhere the levels we need.

Instead, we kowtow to radical activists who try to stop investment in projects like Adani and conduct illegal secondary boycotts on businesses like Greyhound Australia and Siemens without repercussions.

Whether coal is evil or not is irrelevant. The problem is such activism, which is further supported by ideologically corrupted government environmental departments – that push their own agenda on granting approvals – doesn’t endear domestic industries or foreigners to invest in us. These are dangerous precedents. All of this tokenism when we only need look at the realities of what will happen down the line.

Don’t take our word for it. Even our domestic businesses are leaving.

Thanks to Australia’s ridiculous energy prices, Aussie company Bluescope confirmed the expansion of capacity in Ohio. In Feb 2019, the company CEO said, “much cheaper energy in the United States is a major driver of the company’s preparedness to invest in a $1 billion expansion in Ohio.”

In 2017, Tomago Aluminium reported, “We have to grow to be competitive and to be ahead of the curve, but when the spot price went to $14,000 [per megawatt hour] we had to take that load off. It’s just not sustainable. You can’t smelt at that price. We have had to curtail or modulate the load [on occasions] or we get hammered by the price…We cannot continue to keep paying those prices. We have to find a solution. The prices are crippling”

Unfortunately, 28 years of unfettered economic expansion has made us complacent. We think this economical miracle has no off-ramp.

None of this is remotely surprising.

Can we honestly say that the impact of higher electricity prices hasn’t been a factor in pushing away investment in engineering and manufacturing? So this mad push for renewables will not alleviate this pressure. Germany is the perfect beta-test crash dummy. It predicted flat prices. They doubled from those forecasts.

Yet our political class is playing with fire.

We never thought Australia was realistically going to have a surplus when it was announced. Secretly there must be a sigh of relief in Treasury that the impacts of the bushfires and coronavirus will provide a convenient scapegoat to miss those targets under the premise of ‘doing the right thing.’  And no that does not mean the government is glad those two catastrophes have happened from a humanistic approach.

We need proper reforms. We need to ditch these notions of political correctness in public policy. We are as unimaginative as many other governments around the world. Living on a low-interest rate fuelled debt bomb. Kicking the can down the road simply does not work. Why aren’t politicians convicting their cases with evidence rather than folding to ideological positions held by fringe dwellers on Twitter?

When we visited Israel on a business delegation in 2018, Israeli PM Benjamin Netanyahu uttered the only 4 words that mattered for investors – “we want your business.” The innovation nation knows what it is good at and is prepared to back it to the hilt.

It would be so nice if our government spent some time in Israel to discover that we have it all wrong. Because we are only storing up a rude awakening. When our economy does suffer from the eventual ramifications of all of that lack of investment, the public will be howling that they can’t pay their mortgages, that they can’t get decent jobs and they can’t keep the lights on. None of that would have been necessary if they had been more open to business.

The ultimate result will be that we’ll put ourselves deeper into debt to fund some monster infrastructure projects that will provide short term relief, not long term solutions.

The foreign investors that could have helped had we treated them in a more dignified fashion will just buy our assets at fire-sale prices instead. Then we’ll have another moment to howl at the moon.

That will be the true price of our complacency. Experience is a hard teacher. You get the test first and the lesson afterwards.