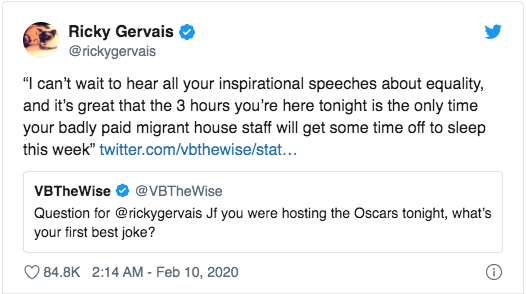 Ricky Gervais true to form in forecasting the hypocrisy that will emanate from the 2020 Oscars.

Hollywood has really lurched towards the “woke” genre. Sadly, audiences have little appetite.

The gender-swap comedy scored $54 million at the U.S. box office. Taraji Henson replaced  Mel Gibson, playing a character who can read what men think. The “What Women Want” comedy of 19 years ago racked up $182 million at the domestic box office.

Arguably the most progressive comedy ever made – looking at empowerment, virtue signalling and feminism. It only managed a $22 million haul.

Elizabeth Banks, an actress-turned-director told reporters her movie would strike a blow against the patriarchy. Banks said, “Look, people have to buy tickets to this movie, too. This movie has to make money. If this movie doesn’t make money it reinforces a stereotype in Hollywood that men don’t go see women do action movies.”

Tanked with an opening of $8.6 million in the US.

Box office grosses for the franchise have been in free fall as it goes down the woke route. Arnie is no longer there to rattle off corny one-liners.

It should appear to Hollywood that movies about real-life stories are the ones that seem to resonate most with audiences – Titanic, The King’s Speech, Argo and A Beautiful Mind. These 4 films grossed $1.04 billion at the box office. It has been 12 years since Hollywood has had a fictional film it chose for itself beat the worst of the 4 movies based off real stories in ticket sales. It has been 15 years since having a proper blockbuster like Lord of the Rings which is arguably pure fantasy and extends to child audiences.

Films are of course subjective. One film one person may enjoy, others may not share the same view. It is interesting though that $100m box offices were a cert for an Oscar Best Picture award til 2004 after which it has been hit and miss since. 9 films in the last 13 have failed to breach $75mn. So instead of Hollywood being so preoccupied with espousing politics, perhaps it should look to the audience it ‘preaches’ to and starts ‘reaching’ them instead.