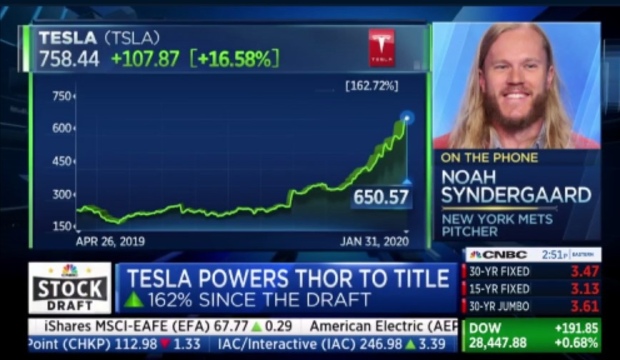 As a former stock analyst, the euphoria around Tesla seems insane. Still Mr Market is always right. I’ve been totally wrong on the direction although I still contend it’s way overvalued, especially as the Q4 was down on Q3. Who needs facts?

Now that a new target price of $7,000 has been put on Tesla by one analyst – which would make it worth around $1.3 trillion – we see that social media clickbait is driving the analysts to outdo each other rather than base it on rational fundamentals.

To make the point, even CNBC thinks getting a NY Mets baseball pitcher to give his 10c worth on Tesla makes more sense than inviting a sell-side analyst.

The twist in Tesla’s tale is that with a $130bn market cap, it could raise capital and buy a competitor auto maker to get access to production, multiple platforms and distribution expertise, three skills it sorely lacks.

What would I know? Elon Musk is a salesman extraordinaire. That has never been in doubt. The question is whether the hype built into it can match the euphoria.