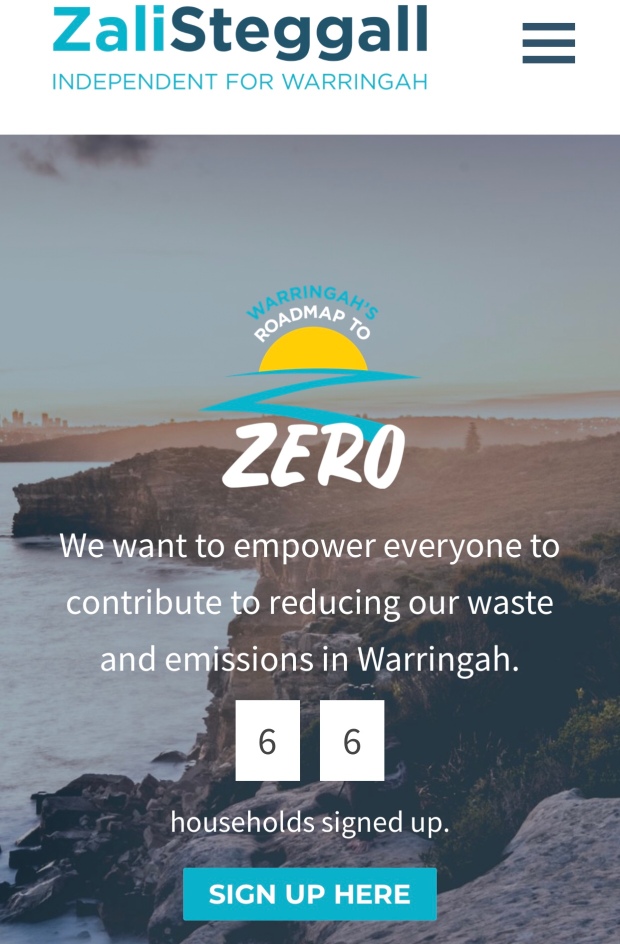 For the 63,956 dwellings in my Warringah electorate, it is cute to see 66 households, yes 0.1%, sign up to local member Zali Steggall’s ‘Roadmap to Zero‘ campaign. Not even her army of campaign staff have signed up. In an area where there are probably more gas-guzzling SUVs per square mile than most places, this is the expected response to such a token suggestion.

We have been calling for the government to come up with a plan. If we are calling for it nationally, let’s work it out locally.

We’re focusing on seven sectors where we can make a difference: Energy, Transport, Waste, Food, Finance, Water & Other.

And we’re calling for businesses who can help us reduce emissions in these sectors to get involved and share their knowledge.”

As the recipient of a hard copy letter to the same effect, one wonders if Ms Steggall has had a larger carbon footprint in the mail out than she will save via 66 households who in theory should stop driving and start taking cold showers (responsible for 50% of household emissions) immediately.

What we want to know is how empowering is it to limit waste and emissions when 99.9% of households haven’t signed up? Perhaps she should go to Lotto Land football stadium when the Manly-Warringah Sea Eagles play again and suggest no more night games.

We would like to remind Ms Steggall that the Northern Beaches (local) Council, a large part of the Warringah electorate, announced a climate emergency. In the 2017/18 annual report it states the council saved 293 tons of CO2. Given that Australia produces around 561m tons, this amazing effort has meant a reduction of 0.0000522% of Australia’s total. Put it against Australia’s CO2 impact vs the entire atmosphere means that Northern Beaches have hammered home a mammoth 0.000000000699857% saving! Yes, 9 zeroes.

Yes, the Roadmap to Zero, really is zero.