No wonder Premier Dan Andrews had the support of the United Firefighters Union in the 2014 election. Once put into office he pushed the Victorian Country Fire Authority (CFA) under its wing. Since elected, over 850 new FT jobs have been added to the CFA which stand at nearly 3x that of the NSW RFS. The CFA budget, according to the annual reports (here) has ballooned from $484mn to $657m over the same period. 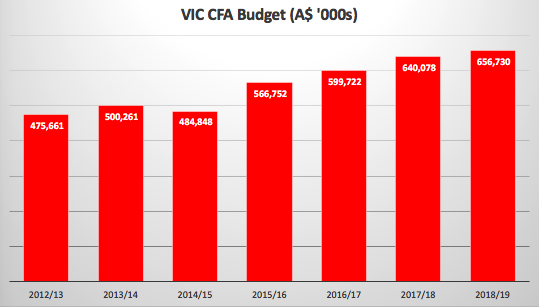 We also note that under Dan Andrews, the number of volunteers has fallen from 59,700 immediately before he took office to 54,621 today. Volunteers were none too impressed to be told their selfless service would be controlled by a union.

So do we immediately implore PM Scott Morrison to start splashing out the cash in Victoria? What has Victoria got for its money in terms of equipment?

In terms of fire trucks, the CFA has less than half the number that the NSW RFS has in its fleet. Only on water carriers does the CFA trump the RFS with 286 vs 63.

Unfortunately, the CFA has very limited data on controlled burn-offs and data that is useful in making a comparison. We will need to dig deeper into the bowels of the CFA statistics.

Within the annual reports, the CFA spends far more time discussing LGBT Pride, gender equality and diversity. Which probably goes some way in explaining why so much of the CFA budget is directed at jobs, not equipment.

Once again, FNF Media thinks the grounds for auditing the fire services is a necessary evil to get to the heart of how such devastating bushfires got out of control and burnt for so long. The data here simply throws up too many questions. As a consolation, the NSW RFS looks far more efficient than the CFA. Then again, in the Democratic People’s Republic of Victoria, this should surprise nobody.