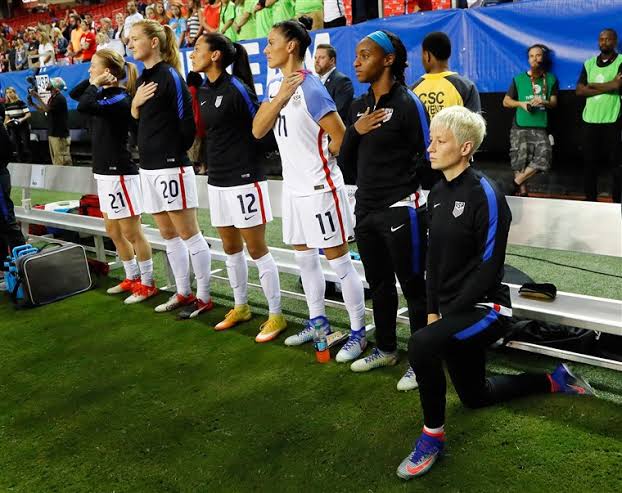 You have to hand it to society nowadays. So desperate are people to appear virtuous they will go above and beyond to prove themselves worthy. Sports awards tend to be a mix of on-field performance and off-field service to promote the game for the greater good.

Megan Rapinoe has won the Sports Illustrated 2019 Sportsperson of the Year. Yes, the US Women’s National Team (USWNT) has won the Soccer World Cup back to back. It is an admirable achievement even though the USWNT were defeated 5-2 by a bunch of 14yo boys from Dallas.

260m watched the Women’s Soccer World Cup final in 2019. The 2018 men’s World Cup in Russia saw 1.12bn tune in for the final. 4.3x the audience. Sponsors are well aware of this and tailor advertising dollars accordingly. If the women’s teams garnered more eyeballs, we can be guaranteed women would be paid more.

Unfortunately, Rapinoe is such a dreadful role model for children even though she ticks the diversity and LGBT boxes. Her profanity-laden victory parade speech (in front of kids) after the World Cup win (from 6:30 in the video) was all class. All about identity politics and screaming for “equal pay” even though the stats reveal the USWNT gets more funding than the men’s team (USMNT). The USMNT generates more revenues, despite the poorer results.

Yet Rapinoe defines the age. All about equal pay regardless of revenue generated. Perhaps every soccer player in the world should be benchmarked against Cristiano Ronaldo at Juventus. Perhaps his 81mn Twitter followers and talent allow him to charge a premium for his services which the market is willing to bear i.e. $108mn in 2019. Neymar should be up in arms for the pithy $90m at Real Madrid! Surely those on the bench should be protesting the fact they aren’t on an even playing field! Equal Pay, Equal Pay!

If Sports Illustrated truly wanted to brand a female success story in sports against the odds and shove it in the face of the white patriarchy, they could have championed the brilliance of 21yo Spanish rider Ana Carrasco, who became the first-ever woman to win a world motorcycle racing championship competing alongside men. She won the World Supersport 300s crown. If there was ever a better display of rising to a challenge in a sport dominated by males, this was it! She beat them all! More than that she embodies great sportsmanship.

CM wrote in January about her first-ever race win last year on equal machines with the boys. Shows that grit, determination and skill can make the difference without this recent desire to throw handicaps to even it out. Great job indeed to win on identical bikes.

Rapinoe is a talent in her own right. No one can dispute that. It is just a shame that it comes with all unnecessary identity politics based bluster.

Perhaps Sports Illustrated should heap lashings of praise on the Football Federation of Australia’s (FFA) kneeling at the altar of political correctness by carrying through with equal pay. Little does the FFA realise that pandering to social justice does nothing to win over fans. Because if the right talent isn’t paid accordingly, an overseas league will quickly bid the best players away and hollow out the local market. Attendance will drop and the revenues and sponsorship dollars will dry up with it. Doesn’t require rocket science.

The Aussie women’s Matildas achieved a peak crowd attendance of 16,829. The men’s Socceroo team saw 77,060 supporters at ANZ Stadium on 15 November 2018. 4.6x more fans watched the men’s national team over the women’s. It is nothing to do with gender. Fans prefer watching the men’s game, including women. Because of that, sponsors are willing to pay for greater exposure.

That isn’t casting aspersions on the female players per se. It is just that sports will always be driven by the sponsorship dollar. In certain fields, men get paid more than women. Perhaps male supermodels should take umbrage that Kate Moss gets paid multiples more for the same job.