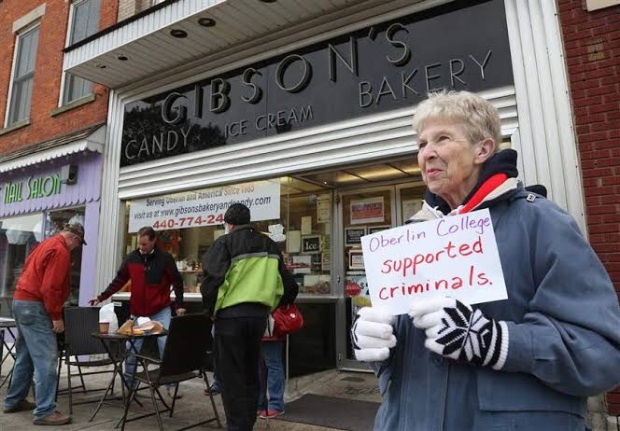 This is what happens when the identity politics of the radical left backfires spectacularly. Oberlin College in Ohio has been sued for defamation and charged $44.2m in damages. It was awarded by the court to Gibson’s Bakery for unsubstantiated claims of racism.

The whole issue started when a student from Oberlin College was caught shoplifting two bottles of wine from Gibson’s Bakery while trying to buy another with fake ID. Allyn Gibson, son of the owner chased down the shoplifter but was attacked by his accomplices. The perpetrators claimed racial profiling by the store.

Oberlin College’s Dean of Students, Meredith Raimondo, joined in student protests calling Gibsons a “racist establishment.” It was then that Oberlein ended all business with the bakery (which had been an ongoing supplier to the college since 1885). Flyers were printed and the store attacked.

Several faculty staff joined the protestors who tried to shut down Gibsons despite the college president Carmen Twillie Ambar suggesting they were on private time and only representing their First Amendment rights, not representing the school.

After a police investigation turned over nothing to suggest racism on any level, Oberlin resumed its contract with Gibson’s but refused to publicly retract the accusations.

Gibson sued for defamation and won. The three perpetrators admitted they’d made it all up and that the shop owner had a right to charge them for their crime. Jussie Smollett style!

Gibson family attorney Lee Plakas concludes in a statement, “The recent efforts of Oberlin College and President Ambar to reframe this as a First Amendment issue, while undermining the jury’s decision, should be incredibly concerning to us all. Oberlin College was never on trial for the free speech of its students. Instead, the jury unanimously determined that Oberlin College libeled the Gibsons. Despite what spin the college places on the facts of this case, libelous statements have never enjoyed protections under the First Amendment.”

Get woke, go broke! Many at Oberlin College are the very racists they condemn.