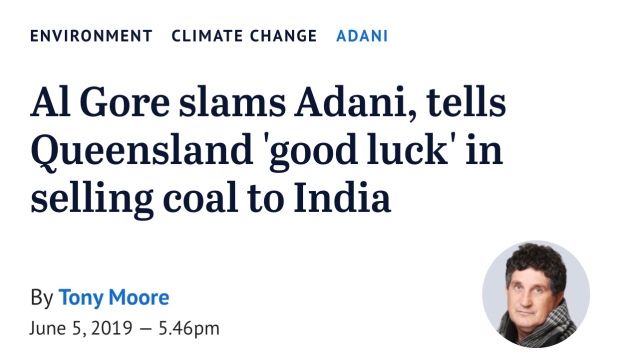 Good to see Al Gore lay into Adani. Adani should wear it as a badge of honour given Gore’s track record of catastrophic failure with respect to his predictions. To show how out of touch he is, there is an irony that Adani, being an Indian entity, probably has more on-the-ground intel on plans for coal fired power. So luck is probably the last thing it needs.

India that has grown coal fired power gen from 61GW to 221GW. 4x in 18 years. While India might be diversifying the grid mix, coal isn’t on the way out as Gore hopes. 74% of India’s power gen is currently coal- fired. Plants don’t get closed over night. Expect a 40 year life minimum for a plant. Hazelwood was almost 50 when it was prematurely closed. Coal isn’t going away anytime soon.

A quick question, does anyone know whether Gore provides a disclosure statement as to which, if any, investments he has in the renewables field? It’s one thing to put one’s money where one’s mouth is but another not to disclose it when evangelizing.