CM can absolutely guarantee there is no bias at the national broadcaster, ABC. This ABC Kids program seals the verdict. Note the above link won’t allow it to be played on this website. The link in the previous sentence will.

While the Spanish PSOE Socialists won the most seats in the third general election held in four years, it was the anti-immigration VOX Party which had the biggest percentage gain from 0 seats to 24, (0.2% to 10.3%) of the vote. 2.67mn Spaniards voted for them.

Vox recently won 12 seats in the Andalusian parliament in December 2018, making it the first time a far-right party gained regional representation since Franco’s fascist dictatorship ended in 1975. So populism in Spain is on the rise. Vox was formed in 2013.

No forming of a coalition would conceivably grant PSOE a majority so it looks like Spain will have another hung parliament.

Although PSOE’s Pedro Sánchez has done a commendable job post the no confidence motion which ousted PP leader Rajoy from the top job, perhaps the EU should pay attention to yet another member state starting to show fangs of discord. 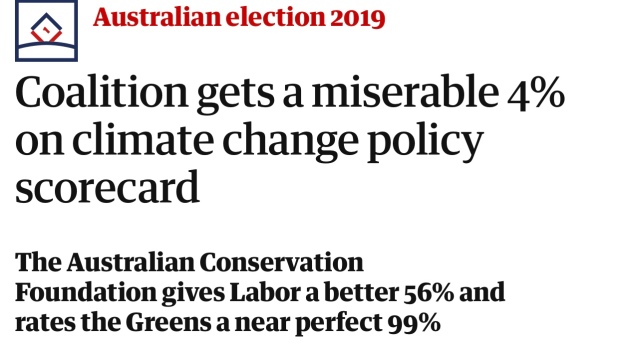 The Australian Conservation Foundation (ACF) might be accused of a bit of sampling bias. Who’d have thought that the Greens would win a 99% score on climate change policy? Clearly the ACF don’t take economic costings into account. Perhaps that’s why the Coalition gets 4%. Maybe the 56% scored by Labor assumes they are only moderately competent on costing.

Since when did the Australian Prudential Regulatory Authority (APRA) become an axe on climate change? Next thing we will see is 16yo Greta Thunberg, of school climate strike fame, adorning APRA releases and annual reports. APRA should stay in its lane as the only disaster on the horizon will be self inflicted.

In the AFR today, it was reported that the financial services sector regulator said, “there is no excuse for inaction on climate change, warning there is a high degree of certainty that financial risks will materialize as a result of a warming climate.”

APRA noted that only 1 in 5 companies are meeting voluntary climate risk disclosure targets which are set out by the Task Force in Climate-related Financial Disclosures, a private sector body chaired by none other than global warming alarmist Michael Bloomberg.

What in the world is APRA doing trying to implement guidelines put forward by a body backed by an agenda? Has APRA considered the wealth of literature debunking global warming? The plethora of scandals that have befallen the UNIPCC, NOAA and even our own Bureau of Meteorology! Has it considered the dozens of dud predictions made by the IPCC? The UN climate science body has publicly climbed down from so many alarmist claims, citing no evidence or extremely low confidence. Can APRA put hrs numbers on what global warming might do?

To be honest, APRA should stay in its lane. It follows on from the lunacy spread by the Reserve Bank of Australia (RBA) on the same topic. The only “high degree of financial risk” will come from their own terrible stewardship of the financial sector.

As CM wrote late last year Australian banks are in a terrible position financially. CM believes there is a high risk that some of Australia’s major banks will end up all or part nationalized when the property market bursts. To quote some excerpts:

“In the late 1980s at the peak of the property bubble, the Imperial Palace in Tokyo was worth the equivalent to the entire state of California. Greater Tokyo was worth more than the whole United States. The Japanese used to joke that they had bought up so much of Hawaii that it had effectively become the 48th prefecture of Japan. Japanese nationwide property prices quadrupled in the space of a decade. At the height of the frenzy, Japanese real estate related lending comprised around 41.2% (A$2.5 trillion) of all loans outstanding. N.B. Australian bank mortgage loan books have swelled to 63% (A$1.7 trillion) of total loans…

In the following two decades, 181 Japanese banks, trust banks and credit unions went bust and the rest were either injected with public funds, forced into mergers or nationalized. The unravelling of asset prices was swift and sudden but the process to deal with it took decades because banks were reluctant to repossess properties for fear of having to mark the other properties (assets) on their balance sheets to current market values. Paying mere fractions of the loan were enough to justify not calling the debt bad. If banks were forced to reflect the truth of their financial health rather than use accounting trickery to keep the loans valued at the inflated levels the loans were made against they would quickly become insolvent. By the end of the crisis, disposal of non-performing loans (NPLs) among all financial institutions exceeded 90 trillion yen (A$1.1 trillion), or 17% of Japanese GDP at the time.

…In 2018, Australia’s GDP is likely to be around A$1.75 trillion. Our total lending by the banks is approximately $2.64 trillion which is 150% of GDP. At the height of the Japanese bubble, total bank lending as a whole only reached 106%. Mortgages alone in Australia are near as makes no difference 100% of GDP...

…In Westpac’s full-year 2018 balance sheet, the company claims around A$710 billion in assets as “loans”. Of that amount, according to the latest APRA data, A$411 billion of lending is ‘real estate’ related. Total equity for the bank is A$64.6 billion. So equity as a percentage of property loans is just shy of 16%. If Australia had a nationwide property collapse (we have not had one for three decades) then it is possible that the banks would face significant headwinds.

What that basically says is if Westpac suffered a 16% decline in the value of its entire property loan book then it would at least on paper appear in negative equity, or liabilities would be larger than assets. Recall in 2009 that BoA had over 16% of its residential loan portfolio which went bad.“

We ought to be extremely worried if our financial regulators are devoting any time to this utter nonsense. It is highly doubtful that APRA could gain any meaningful insights on climate change even if there was 100% compliance with Bloomberg’s diocese. Utterly embarrassing. 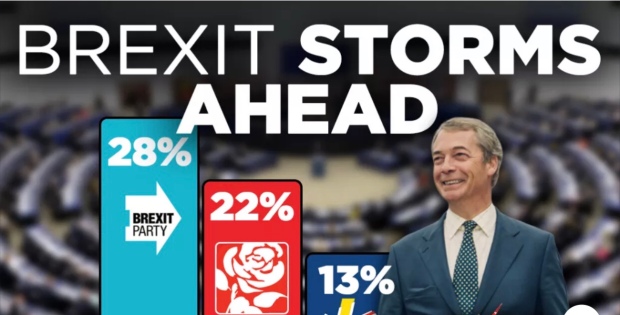 The latest YouGov opinion poll has Nigel Farage’s Brexit Party at 28%, Labour at 22% and the Tories at 13%. Interestingly YouGov polled 5x as many people as usual. Very damning indictment on Theresa May’s lack of decisive leadership. The PM has had no authority from the beginning of this process and remaining (no pun intended) in the top job is toxic for the Conservatives.

Foxx has defended the decision and says she welcomes an independent investigation. They are also requesting her deputy and Smollett attend the hearing.

Will be interesting how a State Attorney’s office can explain handing down a ruling emphatically stating Smollett is guilty but dropping all 16 charges. 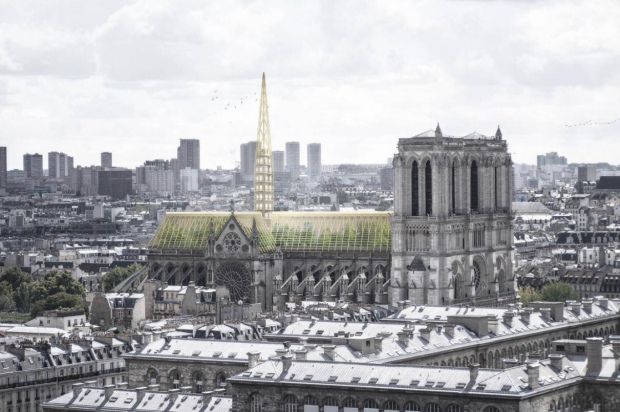 What is it with people who don’t want to respect centuries of tradition and history? When the 850yo cathedral caught fire the world looked on in collective horror. Now some nitwits think that “climate change” should dominate the restoration of one of Paris’ most iconic buildings.

The Independent wrote, “In response, Paris based architects Studio NAB submitted a design that is adapted to perhaps the greatest challenge of our era: climate change.”

Why not suggest to city planners they should attach a giant propellor to the Eiffel Tower so it can generate wind power?

Climate change is a religion. Sadly Notre Dame is of Catholic faith, not part of the global warming diocese, even with a social justice warrior as the Pope.

Maybe Australia can take notes and clad the Sydney Opera House in solar panels? Perhaps the Japanese can tear down Kiyomizudera and use the wood for biomass?