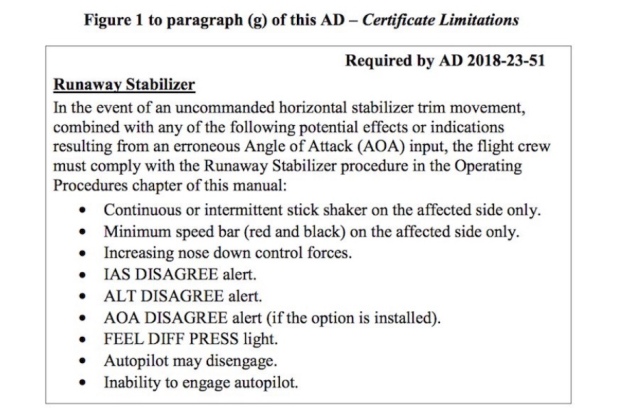 The Federal Aviation Administration (FAA) has issued a continued airworthiness directive (AD) notification for the Boeing 737 MAX-8 after the crash of flight ET302. Note there have been 15,342 ADs issued by the FAA. 46 have been issued in the last 60 days. While we probably don’t give it much thought when we board a flight, that’s how much scrutiny goes on behind the scenes.

As tragic as the preventable loss of life was, the FAA had issued training procedures on 7 November 2018 to overcome the angle of attack (AOA) problem post the Lion Air flight JT610 MAX-8 accident on 29 October 2018. Many airlines assured the FAA that their crews have been trained to handle the issue in case of malfunction.

Former NTSB member John Goglia noted that while many pilots have learned to fly aircraft with complex electronic aids, those in countries with less developed aviation industries have less experience flying without them.

The FAA views the MAX-8 as a safe aircraft provided the erroneous AOA data is dealt with correctly. Boeing will fix the problem to ensure the product’s reputation. To the FAA, if the AOA couldn’t be disabled then the aircraft would be grounded.

Note Boeing has 4,800 orders outstanding for the MAX type. Around 230 are in service. The aircraft is the most popular selling commercial jet plane worldwide.

It’s not the first time Boeing has had issues with the 737.

In 1991, the first of a series of rudder hard overs caused several crashes until one pilot managed to save his plane which suffered the same fault for investigators to understand the problem and rectify it.