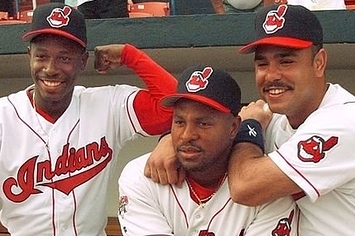 The NY Times reports that the Cleveland Indians will change its logo from 2019 after pressure from activists.  Douglas Cardinal, an indigenous Canadian activist, sought a last-minute court injunction to prevent the team from using uniforms depicting the Indians’ name or the Chief Wahoo logo while in Toronto. His plight failed but the team is taking heed of the “goal of diversity and inclusion”. The Commissioner of Major League Baseball Rob Manfred said “[The Clevelend Indians] ultimately agreed with my position that the logo is no longer appropriate for on-field use in Major League Baseball“

The sad thing about this is that fans (who probably live in Cleveland) just support a team. The naming was in praise of the ‘fighting spirit’ of Native Americans rather than a call to mock them to perpetuate racism. Indeed if racists founded the team, why not name it the ‘Rednecks’? The last thing a racist would do is name their team after a supposedly ‘inferior’ people. Indeed if the fans were racists they wouldn’t follow the team on that basis alone. The team would lose money as they’d have no support and be forced to change the name.

This type of PC stupidity was raised when CM was a defence analyst a decade ago. Our HR team sent a message saying we could no longer call a defence program by its official name – ‘Apache’ – but refer to it as a ‘native American helicopter program’. The only problem was that pretty much all US military helicopters are named after Native American tribes – Apache,  Sioux, Iroquois, Comanche etc. They were named in honour of their fighting spirit not to poke fun at Chief Sitting Bull.

Douglas Cardinal said, “I had been thinking about the problems we have as a community with the issue of suicide, and I think there is a direct correlation between these kinds of depictions of our people as inferior and as caricatures to be mocked. It is wrong and it must stop.” The Cleveland Indians have been called that since 1915.

Does Cardinal think that one baseball logo can be a driving factor in Native Americans being more likely to die of alcohol-related causes, diabetes or tuberculosis than the national average? Or that they also have the highest rate of intimate partner violence in the U.S., while Native American children are at double the risk for abuse and neglect?

Now that Cleveland has buckled let’s see how much the shocking stats above plummet? The guess from here that there will be no ‘direct correlation’. No one questions the heavy heart of the social issues faced above but to think changing a baseball logo which is in praise of a culture will change things is obtuse.

Besides, the Cleveland Indians have been diverse for quite some time. The picture above is from 1995.  In fact it would be fair to say that diversity now is growing more about language and symbols rather than the people they wish to protect.