The National Institute of Health (NIH) lists the top 10 categories of causes of death in America in 2015 as above. Heart disease was the highest cause leading to over 633,800 deaths. Cancer was slightly under 600,000. Respiratory disease came in 3rd at 155,000. Homicide, while not listed in the Top 10, was around 14,000. Total drug related deaths were around 50,000, equivalent to deaths from car accidents and murder combined. Death from heroin and illicit opioid overdoses exceeded 20,000.

Sadly suicides in the US totaled a shocking 44,193 in 2015, most prevalent in younger age groups. Over the last 15 years we can see that suicides per head of US population has continued to climb.

The detrimental economic impacts are also quite heavy, The National Institute of Mental Health (NIMH). Suicides cost around $51bn annually while homicide is around $26bn. 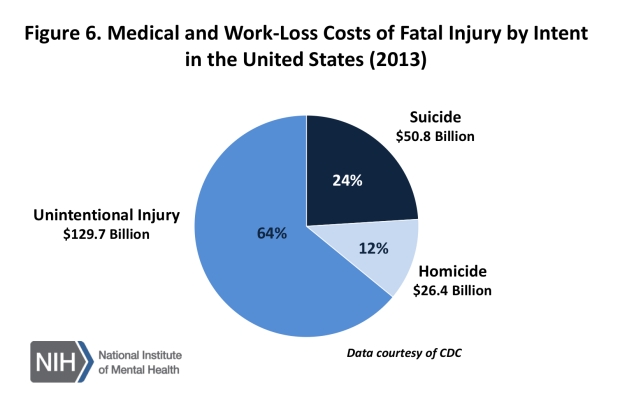 Perhaps the most alarming part of the NIMH study was the 1.1mn people that made proper attempts to take their own life. Almost 10mn contemplated it. 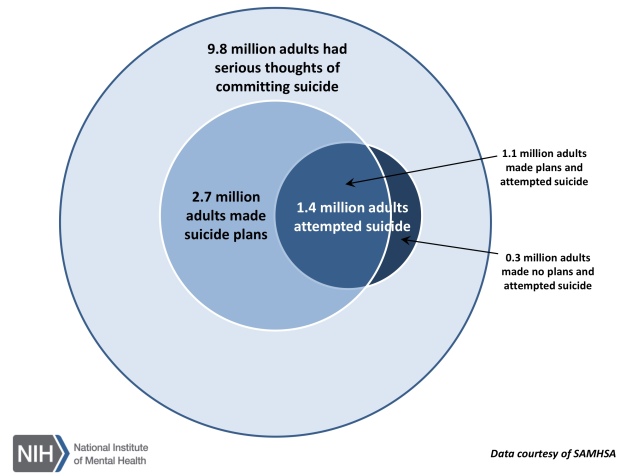 In Australia, suicide rates are also at a decade high of 12.6 people per 100,000 or almost identical to those rates in the US. 3,000 took their life in 2015. According to Beyondblue 3 million Australians suffer from anxiety or depression.

China accounts for 26% of the world’s suicides. According to the World Health Organisation (WHO), the country saw c.500 by women per day taking their own lives in 2009 or around 183,000 a year. At that rate some 1.5 million Chinese women have taken their own lives in the past eight years.

Japan is approximately down to 19.5 suicides per 100,000 but South Korea remains persistently high at 28.5.

It is a point worth reflecting on. There have been six people from my own high school year who have taken their own life. Seemingly happy and healthy on the outside, matters have taken a turn that not even friends could have detected until it is too late.

-substance abuse
-incarceration
-family history of suicide
-poor job security or low levels of job satisfaction
-financial insecurity
-history of being abused or witnessing continuous abuse
-being diagnosed with a serious medical condition, such as cancer or HIV
-being socially isolated or a victim of bullying
-being exposed to suicidal behavior

Worsening economic conditions are undoubtedly pushing more people toward suicide. Greece, which does not have a high suicide rate (8.8) compared to other EU countries (average of 11.6 people per 100,000), saw tough financial austerity measures leading to a 35% jump in suicide rates in a little less than 2 years, not dissimilar to Russia between 1989-1994. Each 1 percentage point rise of unemployment rates in men aged 20 to 59 was associated with a 0.19/100,000 population rise in suicide. Spain saw 20% higher suicides in 2015 vs 2008.

Help is at hand.