I was waiting for the diversity brigade to troll out the stereotypes. #whitelash seems to be the key one being wheeled out to show ‘wealthy white American males’ deliberately voting for Trump to punish Obama and black America. Seriously? 50% of eligible voters didn’t show up. I would argue that that anyone of that persuasion was unlikely to have voted for Obama in the first place in Nov 2007 or Nov 2011. To think that all of these white Obama supporters had a sudden brain snap? Trump saw a rise from Romney’s record in both Black (6->8%) and Hispanic (27->29%) while Hillary Clinton saw a reverse vs Obama of Black (93->88%) and Hispanic (71->68%). Listen to Farrakhan smash Obama for ignoring his own people before the election. Was the landslide solely driven by whites? 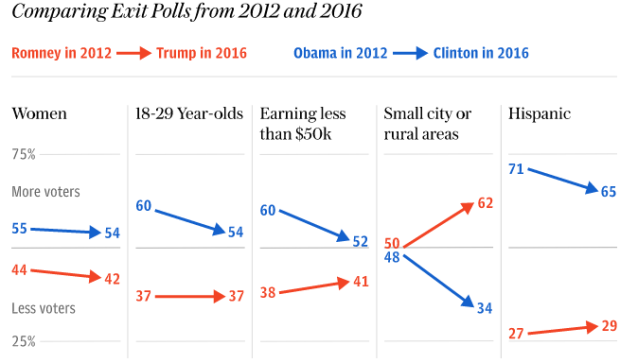 President Obama was put into office twice by blacks, Hispanics, whites and other minorities. 200mn people or 62% of America is ‘white’. He won fairly and many of these white folk would have had to vote for him to make it happen.

Could it just have been that Obama’s policies were not delivering? Sure he was given a Hail Mary pass from the Bush Administration with the financial  collapse, a messy Congress but for all of the claimed achievements, middle income Americans have continued to see their wealth and livelihoods shrink. More people than ever before have had to take on more than one job to make ends meet. America’s Research Group (ARG), which has been tracking consumer shopping trends since 1979, says that 26 million Americans are juggling multiple jobs and only earnings $27,000 average. These people are supporting 2-4 kids and 68% are women aged 28-38 working in retail or call centres.. 47% of Americans can’t raise $400 in emergency cash without selling something according to the Fed. One bank survey showed 34% of American’s had ZERO savings while 69% had less than $1,000 in the bank. It was growing helplessness.

Even if richer ‘white’ folk voted for Trump on the hopes of lower taxes do you blame them? If I offered to double your taxes will you embrace me or punch me in the nose? It isn’t anti-Obama so why does the press consistently move to turn it into identity politics? Could it be that those suffering didn’t see that another 4 years of Obama-esque policy under Clinton with the prospect of even higher taxes was an appealing choice given they were still under a rock since 2008? 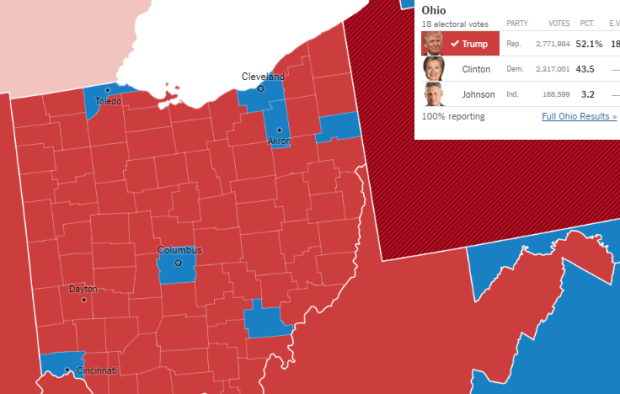 Something that intrigued me the entire election was the heat maps. When you clicked into the individual states, it would mostly be red, surrounded by blue splodges around the main city centres that were blue. If there was ever a sign of how the ‘hicks’ were feeling this was it. I remember reading a paper from the National Federation of Independent Business (NFIB) which said that small businesses were being crushed under the weight of endless regulation. Small businesses (I am one) by their very nature are self-regulating. You have fewer options with frivolous expenditure. Many claimed that Obamacare

“The Politico/Harvard survey found that over half of Americans believe that it has become more difficult to get ahead financially for low-income people, and nearly the same percent believe it is also true for those with middle-incomes. Looking ahead, only 18 percent are optimistic and believe the economy will pick up over the next 10 years compared to 21 percent who believe the economy will slow down. About half of Americans foresee more of the same.

The NFIB Small Business Economic Trends monthly survey of small-business owners reports a strikingly similar sentiment with more owners expecting the economy to worsen in the next six months than improve. Owners’ outlook for expansion is equally dismal as few find it a good time to grow and expand. The gloomy sentiment is not surprising with GDP growth averaging 1 percent over the last nine months.

Small-business owners’ lack of enthusiasm is exacerbated by the myriad of cost burdens and uncertainties that impact their business. NFIB’s 2016 Small Business Problems and Priorities survey found that five of the top ten most severe problems affecting small-business owners are tax related. The highest ranked problem is the cost of health insurance followed by unreasonable government regulations.”

Obamacare (in force since 2010) has put small businesses at a significant disadvantage when competing against larger businesses because the latter can more easily absorb higher health insurance costs. Numerous small businesses have had to cancel their health insurance benefits completely, dumping a growing number of employees into Obamacare exchanges. This is not only bad for the employees, it’s horrible for the businesses, who are now losing quality job applicants to large corporations that offer better benefits, according to the Level Funded Health poll. The survey found 56 percent of the 2,500 small businesses polled say they are losing quality employee candidates because of the rising costs associated with employer-provided health care plans under Obamacare.

Before 2016, many of the time-consuming regulations for small businesses with 49-100 employees weren’t enforced. This was to give businesses more time to prepare for the rules. Now that many small businesses are going to be forced to comply with myriad health care rules and regulations they have been able to avoid in the past, many experts are expecting the number of Department of Labor audits to increase, which will exacerbate the confusion and costs being imposed on small business. More regulations, additional costs, the risk of fines,  being audited and greater difficulty competing with larger companies for quality employees just compounds the ability to succeed.

So no matter what the spin in statistics and fact checking in the presidential debates the impacts at the coal face are as reported above. Life is getting tougher for the engine room of the economy.

Let’s move the identity politics from the map and focus on people making legitimate choices about their vote. America’s economy is not providing such economic luxury that affords frivolous decisions among those ‘white’ voters. Perhaps the shocking 50% turnout was in part laid blame to the Democrat-biased mainstream media which effectively sold the idea that HRC was a shoe in. She wasn’t – she may have won the popular vote but she might have won the presidency had the people out of touch with the outer communities got up and voted. Perhaps the scandals both within the DNC (the revelations on the Bernie Sanders screw over) and outside (e.g. Clinton Foundation, FBI investigations) reviled people more than a vulgarian who made inappropriate comments about minorities and locker room filth. Then again when porn sites receive more traffic than Netflix, Amazon and Twitter combined every month perhaps the offended sensibilities were all on the outside. Like I mentioned yesterday, Trump had an army of closet voters who probably felt social pressure not to reveal their inner feelings outwardly.

On a lighter note, when are all those Hollywood stars off to Canada? I’m wondering whether the selfie loving Trudeau would allow them in for fear of stealing his limelight? Well we know how some celebrities (sorry…errhem… Your Majesty) have not shown the same enthusiasm as you them Prime Minister Trudeau.